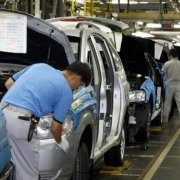 EU struggles to persuade Italy over Korea trade deal
13-Sep-2010 AFP
European partners scrambled on Monday to convince Italy to drop its opposition to a trade deal with South Korea ahead of an EU summit, as Rome fretted about the impact on its vital auto industry.

EU-Korea FTA remains stalled
12-Sep-2010 Business Standard
A hoped-for green light from the European Council, which comprises 27 member-states, was not forthcoming on Friday, as EU trade ministers met to try and break the deadlock.
EU-Korea FTA hits final delay
11-Sep-2010
The European Union’s Foreign Affairs Council yesterday decided to rediscuss the approval of a free trade pact with Korea on Monday, and the 27-member bloc hopes to sign the pact in early October, the minister presiding over the council meeting said.
Italy to veto EU-South Korea free-trade deal: minister
8-Sep-2010 AFP
Italy will veto a free-trade deal between the European Union and South Korea unless changes are made or the implementation of the agreement is pushed back a year, the junior minister for foreign trade warned on Tuesday.

Trade agreement backed by MEPs
8-Sep-2010 BBC
MEPs have broadly welcomed new safeguard measures being brought in as part of a free trade agreement between the EU and South Korea.
FTA with EU to be completed soon
18-Aug-2010
The Ministry of Foreign Affairs and Trade signaled yesterday that the free trade agreement between Korea and the European Union could be signed soon.
Carmakers and trade deals: One-way street
8-Jul-2010
In the next few months European Union governments will have to decide whether to ratify a free-trade agreement (FTA) with South Korea that is described by the EU’s external-trade directorate as “one of the most ambitious and complete deals” it has ever signed.
Green light from Trade Committee for safeguard clause in EU-South Korea trade accord
24-Jun-2010 EP
The European Parliament’s International Trade Committee gave its approval on Wednesday to draft legislation implementing a safeguard clause in the EU-South Korea free trade agreement (FTA).
Where does Korea-EU FTA stand?
9-Jun-2010 Korea Herald
The more than 1,000-page text needed to be translated into 23 languages and is now undergoing legal verification.
EUROFER expresses concerns over FTA with South Korea
27-Apr-2010
On April 23, the European Confederation of Iron and Steel Industries (EUROFER) released a statement expressing its concerns regarding the possible distortive effects of the negotiated market access conditions under the EU-South Korea Free Trade Agreement (FTA) on the European automotive market, which is the main customer base of the European steel industry.
0 | ... | 30 | 40 | 50 | 60 | 70 | 80 | 90 | 100 | 110 | ... | 180