Thailand: Top FTA official throws in the towel
18-Jan-2006 Bangkok Post
Nit Pibulsongkram is to resign as head of the Thai team negotiating a free-trade agreement with the United States because of the tremendous political pressure weighing on him, according to a source at Government House.
US-Thai FTA: Shin Corp deal could affect FTA talks
17-Jan-2006
The Shinawatra family’s reported plan to sell off its stake in Shin Corp Plc to Singapore’s Temasek Holdings might complicate the Thai-US free trade talks and stall negotiations.
Central bank chief wants FTA openness
17-Jan-2006
Bank of Thailand (BOT) Governor M.R. Pridiyathorn Devakula said he felt the mounting opposition to a free trade area (FTA) was due to the lack of an explanation to the public in a concrete manner.
Thai side floundering in FTA talks
16-Jan-2006 IHT ThaiDay
More than anything, this week’s trade talks and the howls of opposition they’ve provoked have spotlighted the starkly different approaches taken by Thai and US negotiators. 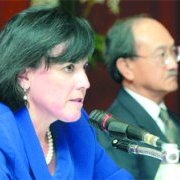 Thai FTA in trouble: US could abandon talks after six rounds
15-Jan-2006 Bahrain Tribune
The United States could abandon free trade talks with Thailand unless Bangkok agrees to redouble efforts to reach an agreement in the next few months, a US trade negotiator Barbara Weisel said. In a telephone call with US reporters, Weisel said it was uncertain the two sides would have another round.
FTA Watch: Movement ‘is gaining strength’
15-Jan-2006 The Nation
The fiery protest that disrupted free-trade talks between Thailand and the United States in Chiang Mai last week was just the first victory for a movement that is gaining strength, says a key organiser of FTA Watch.
Thailand and US equally tough on insurance talks in FTA
13-Jan-2006
Talks to open up market access for the insurance sector within the framework of the Thai-US Free Trade Area (FTA) agreement ended here today with the only agreement - that each side would scrutinise the other’s list of demand for further consultations.
Tough going on services, agriculture in Thai-US free talks
13-Jan-2006
Thai and United States negotiators have failed to make any headway towards a pact on liberalising trade in services under the broader Thai-US Free Trade Agreement (FTA) negotiations, according to Thai industry observers.
Overdrive: FTA debacle reveals PM’s declining fortunes
13-Jan-2006
Like the stalled privatisation of Egat Plc, the Thai-US Free-Trade Agreement talks look like dead meat. It all boils down to the waning credibility of Prime Minister Thaksin Shinawatra.
FTA finance talks with US: BOT baulks at three-year time frame
13-Jan-2006
After the sixth round of free-trade negotiations with the United States drew to a close yesterday, the Bank of Thailand said that Bangkok would continue to push for a gradual opening of its financial sector rather than within three years as the US has proposed.
0 | ... | 20 | 30 | 40 | 50 | 60 | 70 | 80 | 90 | 100 | ... | 200