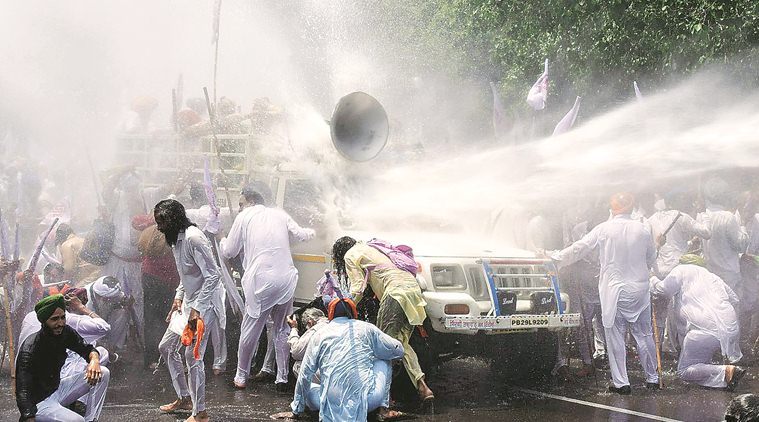 Hundreds of farmers from Punjab, under the banner of the Kisan-Mazdoor Sangharsh committee, were lathi-charged and faced water cannons by UT police after they attempted to scale the police barricade to enter Chandigarh.

In this melee, over two dozen protesters were injured and were given aid at GMCH-32, Chandigarh.

The protesters demanded implementation of Swaminathan Report and fulfilling their long pending demands. They blocked the main road from Chandigarh to Mohali near the YPS crossing. Led by their leader Satnam Singh Pannu, farmers alleged that they opposed the Central government’s decision to implement the Regional Comprehensive Economic Partnership (RCEP).

Pannu said: “The Regional Comprehensive Economic Partnership will ruin small farmers and their trade in the country. We oppose the agreement and will not allow it to be implemented. We need to have talks with the Governor of Punjab. We were holding a peaceful march towards his residence when we were lathi-charged. Over two dozen fellow farmers have been injured. We have also demanded that the government must implement the Swaminathan Report.”

Hundreds of farmers staged a protest march and were intercepted at the borders of Mohali and Chandigarh near the YPS crossing in a joint operation by Mohali and Chandiga police. Farmers held the post for about 5 hours at the crossing. They started gathering at the Amb Sahib gurdwara in Phase VI, Mohali, since morning.

They alleged that none of the government officials came to accept their memorandum which was addressed to the Prime Minister and the President of India through the Governor of Punjab.

They also alleged that non-favorable schemes of the Central government had ruined their families and earnings and they feared that this would further deplete and push them into hunger and poverty.