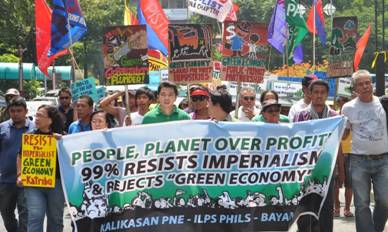 BALI, Indonesia—The Asia Pacific Research Network calls on participating governments to drop the Trans-Pacific Partnership Agreement altogether after they failed to sign an agreement at the sidelines of the APEC talks in Bali, Indonesia.

The so-called ‘gold standard’ free trade agreement (FTA) is currently being negotiated behind doors by 12 participating countries: Australia, Brunei, Canada, Chile, Japan, Malaysia, Mexico, New Zealand, Peru, Singapore, the United States and Vietnam. The South Korean government has reportedly shown interest in joining the FTA. The TPPA aims to achieve full economic integration and seamless commercial transactions between the member countries in the region through intensified trade liberalization. If concluded, it is hoped to provide impetus to future multilateral liberalization under the World Trade Organization (WTO).

From leaked texts of some chapters, it is not difficult to see the overwhelming impact of corporate interests in the shaping of this so-called 21st century agreement. It would appear that almost every chapter in the agreement is a requisition for more market openings to facilitate the entry of foreign private capital with reduced policy and regulatory space for signatory governments.

The trade deal will expand the liberalization of the economies of the member countries through provisions including but not limited to opening up all sectors of the members’ economies to global trade, disciplining state-owned enterprises, opening up government procurement to market access by foreign companies and implementing extended and stricter intellectual property rights. These provisions will further whittle down people’s rights to decent jobs and living wages and to accessible and affordable services like health, education, water, and energy. The TPPA will also curtail internet freedom through stricter copy right laws and intensify environmental plunder because of the race to the bottom competition between governments to attract foreign investors.

At the helm of the TPPA negotiations is the United States which intends to use the FTA, along with intensified military presence and anti-China stance to secure its political and economic interest in the region to as part of its pivot strategy over Asia Pacific. Because of the stalled negotiations in the Doha Round and lack of progress in the multilateral talks in the WTO, developed countries like the US resort to regional and bilateral agreements outside the WTO to pursue their trade liberalization agenda. In 2012, total US trade with TPPA countries was more than USD1.3 trillion in merchandise and more than USD172 billion in services. Now with all NAFTA countries participating, the TPPA has the potential to become the largest US FTA.

Thus, with regard to market access for goods and services, the US is pushing for a high degree of liberalization to enable its exporters to penetrate the markets of signatory countries. The draft investment chapter of the TPPA seeks to compel host countries to liberalize their investment regulations so that the US companies and investors can freely enter and invest in these countries, acquire assets, and move their capital and profits without hindrance. Under the TPPA, foreign investors cannot only have recourse to the normal legal remedies afforded by the host country to protect their interests. The investor-state dispute system proposed by the treaty seeks to empower them to sue governments where their profits (real and potential) are hurt by any government measure, however justified the measure may be on public interest grounds.

What seemed to be glittering gold from three years ago is now progressively fading largely because of disagreements between member countries on the provisions of the agreement. Also, people’s struggles in Japan, Malaysia, Australia, New Zealand, and even in the US for example highly contributed to the exposing of the nature and impacts of the TPPA and generate negative public opinion over the trade agreement.

Recent developments that lead to the shutdown of the US government prevented US President Obama from going to the APEC meeting in Bali and from attending the TPPA side meetings. APRN welcomes the slowing down of the negotiations as this would delay the implementation of the destructive trade pact. Nevertheless, the talks still continue as members are aiming for December, during the WTO MC9, as the deadline to conclude a deal.

There is no denying the fact that the TPPA only advances the interests of corporations which poses a severe threat to national sovereignty and the path towards a people-centered development. It would be an act of folly for any developing country to sign on to such a pact. Rather than engage in the thankless task of trying to redesign the treaty, it is time to walk away from it. APRN calls on governments to drop the talks while they still can before developing country economies and the people suffer the brunt of the trade deal’s irrevocable damages. Instead, governments should make sure that people’s rights and welfare are upheld in any trade agreement that they enter into, which is a far cry from what the TPPA is.