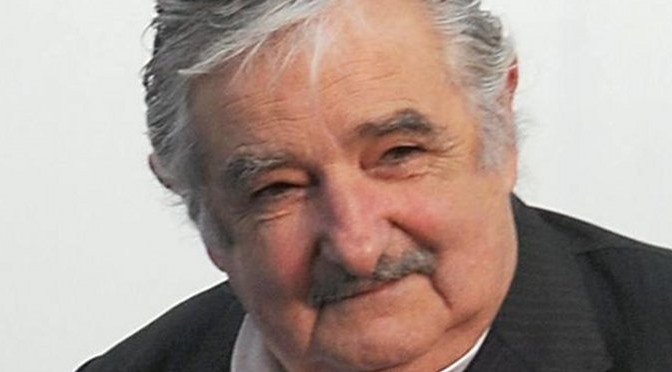 President José Mujica of Uruguay has just completed his official six-day visit to the United States. Hoping to secure an agreement that would ensure the blossoming of U.S.-Uruguayan relations, President Mujica undertook the state visit to Washington with the aim of strengthening diplomatic ties with the White House. However, the visit was not without debate. Throughout his time in the U.S. capital, Mujica did not backtrack on the issues of Cuba and Venezuela. The Uruguayan president consistently promoted the normalization of U.S.-Cuban relations and a resolution of the Venezuelan crisis that respects the provisions of the Venezuelan constitution, as opposed to a resolution dictated exclusively by U.S. interests.

After Mujica’s meeting with President Barack Obama on May 12, COHA had the opportunity to attend the Uruguayan president’s press conference at the Embassy of Uruguay. Topics of discussion included the implementation of bilateral trade agreements to help fight Uruguay’s inflation, the Uruguayan battle against tobacco, and U.S. involvement in Latin American affairs. The visit also afforded an interesting perspective on the distinct similarities and key differences between the presidencies of Obama and Mujica.

During the press conference, Mujica revealed vital details about his exchange with President Obama. In general, Mujica noted that the two leaders praised ongoing Washington-Montevideo relations and discussed how the two countries could better cooperate in the future. As for Uruguay’s relationship with the United States, President Mujica used the press conference to cite five areas of interest in which he would like to see more progress.

Beginning with the issue of tobacco, President Mujica acknowledged having previously been a smoker and echoed Obama’s support for Uruguay in their fight against tobacco. The Uruguayan President expressed his view of tobacco as a major public health issue for both governments, describing the people who have died from smoking as victims of a form of modern warfare. Mujica added that Obama has proven to be very interested in guiding public opinion on the issue of smoking. Nevertheless, Mujica reported that the Obama administration was not particularly interested in being dragged into the lawsuit Montevideo is currently embroiled in with Philip Morris, a Swiss tobacco company. The company has alleged that Uruguayan anti-smoking campaigns have violated a 1988 bilateral investment treaty between Switzerland and Uruguay. Philip Morris specifically complains that restricted tobacco marketing in Uruguay infringes on its intellectual rights, and it demands compensation for what it labels as millions of dollars in lost profit. [1] Interestingly, Obama faced similar tobacco industry resistance when a law to place graphic anti-smoking images on tobacco packages was struck down by a U.S. court as a violation of the First Amendment. [2]

Secondly, the two leaders discussed trade and cooperation regarding education. In particular, Mujica explained his interest in hosting American scientists who specialize in agriculture in order to enhance the production of Uruguay’s agricultural sector. The Uruguayan President stated that he was optimistic about this possible agreement after the presidents’ exchange.

The conversation then proceeded to international affairs, in which Mujica addressed the controversial detention center at Guantánamo Bay. Mujica recently revealed a plan to host a group of ex-prisoners from Guantánamo, which would be of great help in extracting a number of political detainees from the U.S. detention facility. During the conference, questions were raised about the possibility of additional conditions that could be imposed by the U.S. president if such an agreement is to be formulated. Mujica stated emphatically, “He did not ask me anything, because he is smart enough not to ask for what he already knows he will not be given.”

For his part, Obama has made assurances that the prison will be closed before the end of his second term, but given the fact that this promise dates to the American president’s first term, it is debatable whether the closing will be carried out within the next two years. Mujica also highlighted further discussion concerning U.S.-Cuban relations. The two presidents agreed that there must be an exchange of positions on the issue of the Cuban embargo. President Mujica said, “I believe [President Obama’s] government is the most mature [U.S. government] and the only one able to improve the bilateral relations with Cuba. But I cannot say more than this.”

Mujica closed his time with the international media by referring to U.S.-Brazilian relations. The Uruguayan president took a clear position, declaring, “I asked the President to improve bilateral relations and to respect one of the key countries of Latin America : We need to consider Brazil in its real political dimension.” The partnership between the U.S. and Brazil took a major hit in 2013, when U.S. whistleblower Edward Snowden declared to the world that the National Security Agency had been spying on several leaders across the globe, including Brazilian President Dilma Rousseff. The Brazilian President cancelled a trip to Washington in October, and relations between the two powers have remained strained. [3] Mujica may be trying to act as a mediator between the two, but it is doubtful that any breakthroughs will occur in the short term, at least before the Brazilian presidential elections are staged later this year.

Clearly, the issues discussed between Obama and Mujica were fairly comprehensive. However, it is notable that the question of marijuana legalization was absent from their discussion.

Obama and Mujica : Charisma and Substance

Mujica’s visit also highlighted the similarities and differences between the Uruguayan leader and President Obama. At first glance, the heads of state are remarkably similar in many ways. Both used their magnetic personalities and oratorical skills to win their respective elections, promising a departure from the status quo and charming voters with sheer charisma. Mujica and Obama also share a commitment to social welfare and poverty alleviation while still remaining firmly rooted in the globalized capitalist economy.

However, upon review of their tangible accomplishments, a number of differences appear between the two. Mujica has managed to deliver on most of his (admittedly modest) campaign promises. He has increased Uruguay’s GDP by nearly 30 percent and reduced income inequality to make it the lowest in Latin America while also increasing foreign direct investment, largely maintaining the upward trajectory of his predecessor, Tabaré Vázquez (2005-10). [4] [5] Furthermore, according to Transparency International, Uruguay under Mujica has the highest transparency rating and lowest corruption perceptions index in Latin America. [6] Mujica also successfully carried out his flagship project, the innovative Juntos public housing program. Obama, on the other hand, has been largely incapable of accomplishing his goals (although admittedly this has been partly due to a hostile legislature). Economic growth under Obama has been modest, and his prize healthcare reform project degenerated into a watered-down trace of its initial bold outline. Finally, while both leaders espouse the ideology of self-determination and oppose neocolonialism, Mujica has become a much more credible source of global moral authority, though on a much smaller playing field.

A Leader of Latin American Self-Determination

COHA Research Associate Francesca Realacci attended President Mujica’s conference at the Uruguayan embassy. While there, Realacci had the chance to ask the Uruguayan leader a question regarding whether he is interested in Uruguay becoming a mediator between the United States and Venezuela. The head of state replied,

“The only thing I can say is that no one should enter in the internal affairs of a democratic country, because that is what Venezuela is. We must not forget that it is a democratic country, where the only way to amend the constitution is by a plebiscite. It is a country that deserves to be respected, and its constitution [deserves the same treatment]. You have to respect Venezuela and the whole Latin America.”

On a more general note, Uruguayan President José Mujica clearly presented himself as a revolutionary idealist who defies all presidential clichés. For example, Mujica never wears a tie, and he did not do so even to meet with President Obama at the White House. When journalists interview him, he hardly tries to be diplomatic. Instead, he openly displays his impassioned character. During his trip to the U.S., Mujica demonstrated his ability to stand his ground against the president of the most powerful country in the world, designating himself as “the leader” of Latin American self-determination. However, it is still unclear whether the leader of a tiny South American country of minor geopolitical significance and with increasing inflation can maintain that kind of leadership role.