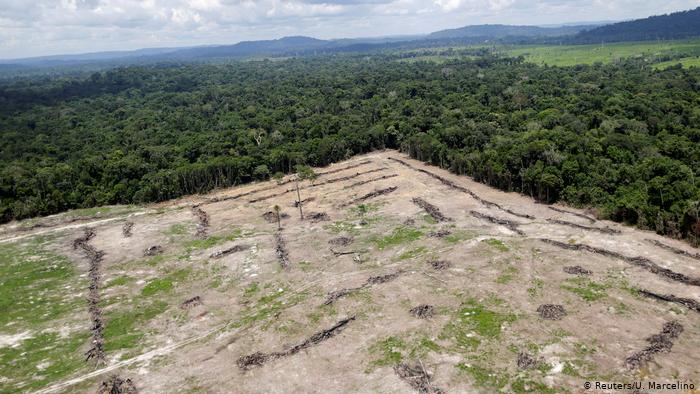 A Trump-Bolsonaro free-trade agreement is an apocalyptically bad idea

A recent op-ed in The Hill lauded the benefits of a possible free trade agreement between the United States and Brazil, yet failed to mention the considerable environmental, climate and human rights risks of such a deal.

Since meeting President Trump in March, Brazil’s extremist right-wing president, Jair Bolsonaro, has made clear his intention to seek increased U.S. investment in Brazil. Bolsonaro’s hope is that U.S. investors and companies will participate in his apocalyptic vision for developing the Amazon rainforest, which involves unrestrained deforestation, industrial mining and agribusiness activities across the rainforest, including within currently-protected indigenous territories.

The current existential threats to the Amazon have been outlined in recent high-profile media coverage. Earlier this week, the Washington Post ran an editorial, entitled “Without the Amazon, the planet is doomed.” And days prior to that, The Economist’s cover-story, “Deathwatch for the Amazon,” hit the newsstands. The latter warned that Bolsonaro’s reckless policies are pushing the Amazon toward an ecological tipping point, after which the world’s largest rainforest will inexorably go up in flames. Given that the Amazon serves as an enormous carbon sink, the global climate implications of this scenario are catastrophic.

As Amazon Watch has documented, many U.S. based corporations – including large commodity traders (Cargill, Bunge, Archer Daniels Midland), banks (Bank of America, JPMorganChase) and investment managers (BlackRock, Fidelity, Vanguard) – are financially benefiting from and complicit in Amazon destruction by enabling the expansion of forest-risk commodities such as soy and beef. Such investments would likely increase under an free trade agreement, as environmental and social safeguards are further weakened under the guise of reducing barriers to trade.

Beyond the stark environmental and climate threats posed by unbridled extraction in the Amazon, there are associated human rights risks. Indigenous territories – the best defense against deforestation – are seeing land invasions and assassinations of their leaders when they resist. Brazil is one of the world’s deadliest countries for environmental and climate defenders, with Global Witness having documented 333 assassinations between 2010 and 2018. The recent killing of indigenous leader Emyra Wajãpi, reportedly by armed miners as they invaded Wajãpi territory in the state of Amapá, is an emblematic case of what is further expected under Bolsonaro.

Living up to his “Trump of the Tropics” moniker, Bolsonaro denies the reality through claims of “fake news.” He is an avowed climate denialist and is attacking scientific institutions that inconveniently paint his policies in a bad light. Brazil’s respected National Institute for Space Research (INPE) has documented an explosion of deforestation in June and July of 2019—the logical outcome of Bolsonaro’s efforts to weaken protected areas, reduce fines for environmental crimes and offer a green light to loggers and miners. Bolsonaro claims that INPE’s deforestation data are lies, and last week fired the Institute’s director, replacing him with a retired Air Force officer.

Past free trade agreements with tropical countries have attempted to address the deforestation crisis. The Peru free trade agreement, which entered into force in early 2009, included the Annex on Forest Sector Governance which, according to the U.S. Trade Representative (USTR), “address[ed] the environmental and economic consequences of trade associated with illegal logging and illegal trade in wildlife.”

Yet any enforcement of the annex has required considerable advocacy pressure from environmental and human rights NGOs, and even so had generated minimal action from the USTR only in the most egregious cases. A decade after the free trade agreement went into effect, illegal logging is rampant around the Peruvian Amazon and corruption plagues the sector.

Given Bolsonaro’s clear political will to expand industrial activity in the Amazon at any cost, it is impossible to believe in the effectiveness of any environmental safeguards that might be built into a free trade agreement. Ultimately, an FTA would serve as an economic and political shot in the arm to Bolsonaro’s destructive policies, without providing any meaningful restraints.

Proponents of the U.S. Brazil free trade agreement seem to be operating in an alternative universe, oblivious to or willfully ignorant of the environmental and social realities playing themselves out in Brazil. Stimulating investment, promoting economic growth and driving corporate profits are paramount, all other considerations be damned. How pushing the Amazon over the ecological tipping point while accelerating global climate chaos wouldn’t entirely undermine those goals is incomprehensible.