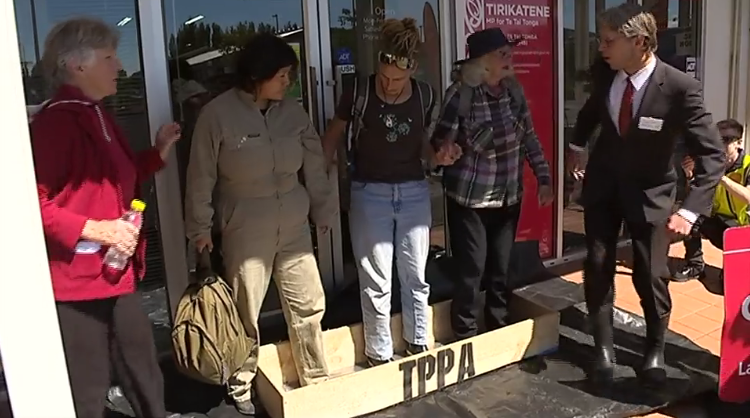 Activists cement their feet in concrete to protest CPTPP signing

A last-ditch effort to stop the CPTPP has seen protesters cement themselves in concrete as well as dumping pillows and soft toys outside MP’s offices.

The CPTPP (Comprehensive and Progressive Trans Pacific Partnership) deal will be signed in Chile on Thursday (Chile time), but activists aren’t giving up the fight.

The Auckland TPP Action Group dumped dozens of pillows, soft dog toys and homemade rats outside the Prime Minister’s office in Mt Albert, Auckland. Messages written on the pillows include ’Aotearoa is not for sale’, ’Protect Aotearoa and our ecological assets’ and ’It’s our children’s future! We must protect it!’

The dogs refer to Ms Ardern’s previous comments that investor-state dispute clauses (ISDS) in the CPTPP are "a dog", and the rats are a reminder the new deal will still need to be ratified by Parliament.

"The pillows symbolise how the Government has gone to sleep on the wider implications of the TPP," said Auckland TPP Action Group spokeswoman Chantelle Campbell.

"The Government needs to wake up and be truthful about what the TPP will mean for New Zealand. If they don’t, they will be lying on their pillows as they try to sleep at night, while New Zealand is being sold out, leaving a nightmare for our future generations to deal with."

Staff at Ms Ardern’s office declined to comment on the dumping. The protesters say they want the items given to the homeless.

Another member of Auckland TPP Action Group, Lisa Er, told Newshub there’s still a chance the CPTPP can be stopped - even after it’s been signed.

"To stop it being signed right now, today, it’s not possible. However it’s still got to go through the ratification process in New Zealand... so we still have a chance."

Hopes have been raised after the European Court of Justice (ECJ) ruled earlier this week ISDS clauses in trade agreements are incompatible with EU law.

Dutch company Achmea was seeking damages from Slovakia after it rolled back liberalisation of its health insurance market. Slovakia was ordered to pay up €22 million by a tribunal in 2012, but that ruling has been thrown out.

"The arbitration clause in the [bilateral investment treaty between the Netherlands and Slovakia] has an adverse effect on the autonomy of EU law, and is therefore incompatible with EU law," the ECJ ruled.

Ms Er said it cast doubt on whether ISDS clauses in the CPTPP are legally binding, but it’s better to be safe than sorry.

"Essentially it’s not going to be strong enough if you’re going to protect this country from tribunals where corporations are going to sue with vast quantities of money. A lot of corporations have more money than the GDP of the whole of New Zealand. They can really take us to task if we want to suddenly say ’no fracking in New Zealand’ or ’no genetic engineering’, anything like that."

MFAT says the ISDS provisions in the CPTPP are weaker than in the original TPP text, with the Government saying sectors including health and education are protected. New Zealand will also seek agreements with individual countries that they won’t use the ISDS provisions that remain.