Freely translated by Anoosha Boralessa in April 2015; not reviewed by bilaterals.org or any organization or person.

The Bolivarian Alliance of Our America (Alba) successfully held its 12th Presidential Meeting. In Guayaquil, its ninth member was added: the Caribbean island of St Lucia. It was the first meeting without the formidable Hugo Chavez whose presence is felt even though he is with us no more. 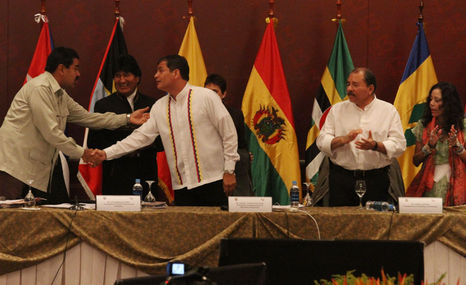 While Alba was born a little earlier than its great opponent, the FTAAs (the Free Trade Area of the Americas), it has been much more successful. The FTAAs neoliberal project collapsed in Mar del Plata in 2005 despite the efforts of George W. Bush and his aiders Vicente Fox and Alvaro Uribe to keep it alive.

The perpetrators that enabled the throngs of Latin Americans to celebrate ordering the binning of the draft FTAAs were Nestor Kirchner and Hugo Chavez. This they did in a meaningful way: in December 2004, together with Fidel Castro, they established an anti-imperialist area. They named it the Bolivarian Alternative of our America. "Alternative" [later] mutated to "Alliance" but it was the same thing: an association between Cuba and Venezuela that welcomed the integration of all the people of, what Jose Marti called, Our America.

Fidel Castro retired from the presidency in 2006 and Chavez died from cancer just as he was getting ready to assume a new term of office. [Chavez] would have been 59 years old on 28 July just passed and his mentor, who considered him his son, will be 87 years old on 13 August of this year [2013]. Both project a positive message for this organisation.

The 12th Presidential Summit of ALBA, hosted by Rafael Correa, was successfully concluded. It took place on 30 July in Guayaquil, Ecuador.

Presidents and/or representatives of the eight established members as well as a brand new member, Santa Lucia, were present. Thus the members are Venezuela, Bolivia, Nicaragua, Dominica, Ecuador, St. Vicent and the Grenadines, Antigua and Barbuda and St. Lucia. Special invitees were the heads of state of Uruguay, Argentina, Brazil, Surinam, Guyana and Haiti.

If it had not been for the coup d’état in 2009 in Tegucigalpa which led to Honduras withdrawing its membership, there would have been ten, not nine, members. Anyhow, in view of the direction the region is heading, there will be no shortage of new countries seeking admission. The tenth member could still be Honduras, if Xiomara Castro, spouse of the toppled Manuel Zelaya, wins the next election.

The Guayaquil Resolution rejected the claims of the United States and other powers to recolonize the region and to convert it into an instrument to satisfy their business needs. Alba valued a new era that “has empowered the majorities [from] an increased militancy in social movements and because revolutionary governments are now in power in Latin America and the Caribbean.”

According to the report of the Cuban Agency Prensa Latina, the conclave repeated that it aimed “to work together to ensure the free provision of quality services that include: education, health and care for people with disabilities”.

This exquisite social and political sensitivity is on account of the DNA of the association’s co founders: Fidel Castro and Hugo Chavez. Such a perspective could unite other Third World Leaders.

Some of the leaders spent a couple of days prior [to the meeting] in Santiago de Cuba where, together with Raul Castro, they participated in the ceremony marking the 60th anniversary of the Asalto al Cuartel Moncada. These leaders were: Nicolas Maduro, Evo Morales, the Prime Minister of Antigua and Barbuda, the chancellor of Ecuador, Ricardo Patino and another leader, Jose Mujica representing a state that is not a member of Alba but which is a member of the Common Market of the South (Mercosur).

Correa was in Caracas regarding his country’s bilateral relationship with Venezuela and had to return to Ecuador to finalise arrangements for the meeting he was hosting. This is why he had to send Patino to the Moncado ceremony. On this occasion, Raul Castro remained in Cuba since he was also acting chairman of CELAC (the Community of Latin American and Caribbean states). Accordingly, he sent his vice president, Jose R. Machado Ventura to Guayaquil.

It is important to note that the nine members kept perfect attendance. This unfortunately was not the case when Unasur met in Cochabamba on 4 July and was forced to reject the imperial manoeuvre against Evo Morales. The following did not attend this meeting: Santos, Pinera and Ollanta. All three leaders of the Pacific Alliance and were joined by their fourth ally, Enrique Pena Nieto, the Mexican leader. All depend on the USA.

The Guayaquil Resolution was entitled “the ALBA declaration from the Pacific”. Will it be a challenge to the region’s Right? A way of saying that it is prepared for battle on this shore?

Some years ago, President Correa patented his definition that the region is not experiencing an era of changes, rather, a change of era. As he was the host, he rendered a passionate and well-founded denunciation of imperialism. An economist from the cradle, he analysed capital domination, the parasitic nature of the European system which was at breaking point, and superpower. This is why the final Alba resolution propounded implies:

“integral and alternative vision of development that is not limited to seeking exclusively commercial agreements but which must guarantee productive development in areas such as energy, intra-regional trade and food production, brokering industries and financing.”

In tandem with the Summit of the Heads of States, another conference was being held also deliberating on the activities of ALBA. This mobilised 10, 000 people. The Presidents received some 200 social leaders at the vanguard. These social leaders handed over to the Presidents a manifesto, encapsulating the movements’ perspective. Far from challenging their approach, Correa, Maduro and Evo and the others emphasised that in this area the governments and the people were in harmony. The common denominator was anti-imperialism.

The new era to which Correa made reference, was noted in the political content of meetings such as the Guayaquil summit and the previous Unasur meeting in Cochamba and the Mercosur meeting in Montevideo, that took place very recently.

There are many fora where a similar popular sentiment is expressed. The Anti imperialist and Anti-colonialist summit is debating in Cochamba. It was convened by the Pacto por la Unidad of five Bolivian social organisations. Yesterday President Morales closed its first day and then his vice - president, Alvaro Garcia Linera, and the Chancellor David Choquehuanca intervened. There were delegations from several countries.

The San Paulo Forum still lacks the edge of change of years past and has been eroded by an alternative: the very socio-democratic Brazilian Partido de Trabajadores (PT). However the Forum is holding a meeting which started yesterday and which will continue till Sunday 4 August in San Paulo. A hundred parties and associations participated and there will also be a parallel social summit. It is anticipated that at its closing, Maduro, Evo and the home-grown Dilma Rousseff and Lula da Silva will participate.

The interventions of Correa and the final document had enormous significance for the people and the Argentine government that would do well to take careful note of them. The host denounced on Tuesday 30 [July] the complicity between transnational companies and international arbitral tribunals.

"one of the dangers that confronts the processes of change” he said “is capital domination. Capital has greater rights than human beings; it has the right to take a State directly before an international arbitration centre, very corrupt and dishonest."

These comments were made with reference to ICSID, the World Bank arbitral tribunal and in relation to Reciprocal Investment Protection Treaties (IPTs).

In these settings, are the manoeuvres of Occidental Petroleum and Chevron against Ecuador, which illegally fall within the scope of the BIT. The President explained that these treaties do not provide for the Amazonian community to make claims against Chevron for damage to health nor against Texaco for damage it caused to health. Chevron-Texaco was ordered to pay 18,000 million dollars in compensation to the Amazonian people and now they claim that the Government of Ecuador handles this sum.

Chevron invested 400 million dollars in 900 lawyers to try to reverse the ruling. The Ecuadorian president warned:

The Declaration of Guayaquil affirmed that

“we are witnessing new forms of exploitation through the imposition of instruments such as bilateral investment protection treaties."

"it backs Ecuador, damaged by transnationals such as Oxy and Chevron, whose damage extends in varying degrees to other countries."

As the government of Cristina Fernandez signed on 16 July an agreement with Chevron, lubricated by Decree 923, favouring foreign oil companies that made investments greater than 1,000 million dollars, it would be good to take note of the allegations of his Ecuadorian colleague and Alba.

Regarding the charges raised in Guayaquil against ICSID, these should not be anything new for Argentina being the country against which multinationals have made the most claims - some 40 instances with at least 2 rulings against it (Azurix - Enron and Blue Ridge - Bank of America). In Jan 2012 Venezuela withdrew from this arbitral tribunal which has such sympathy for multinationals. Ecuador and Bolivia had already done so.

What is Cristina Fernandez waiting for to abandon this tribunal that is so unjust and to denounce IPTs?


Links referred to include:

Statements and Resolutions made at the XII Summit, Guayaquil, Ecuador, July 30, 2013:

Statement of Alba from the Pacific (English version): http://alba-tcp.org/en/contenido/statement-alba-pacific-30-july-2013