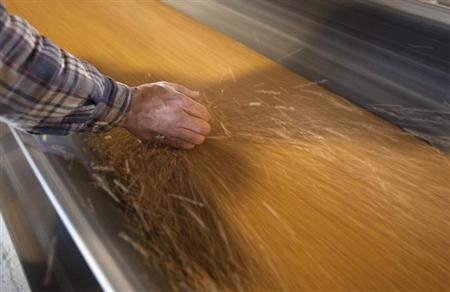 Dan Lizee, operation manager, picks up a handful of wheat off the conveyor belts that transfer wheat from trains to cargo ships at the Alliance Grain Terminal in Vancouver, British Columbia October 6, 2011. REUTERS/Ben Nelms

By Rod Nickel and Philip Blenkinsop

WINNIPEG, Manitoba/BRUSSELS (Reuters) — Salvaging a free-trade deal between Canada and the European Union after four years of talks will require skillful pasture politicking to pacify beef and dairy cow farmers who see more risk than opportunity.

The difficulties underline how challenging bilateral and regional trade deals are to reach, and how groups like farmers can punch above their weight.

Canada’s Conservative government has made trade a priority, but has yet to deliver a major deal. For the EU, a deal with Canada would be a first with a country in the G7 group of industrialized nations and a possible template for a EU-U.S. agreement.

Privately, sources close to the talks say the two sides are not far apart. But after months of deadlock and with trade talks with other partners on the horizon for both sides, the potential $28-billion accord could just as easily fall apart in weeks.

A deal would offer new markets for Canadian grains, beef and pork and for European cheese, as well as give EU companies more freedom to bid on Canadian government contracts and extend patent protection on European-made pharmaceuticals.

Yet Irish farmers see threats from expanded beef imports from Canada, and Ottawa is trying to appease both dairy farmers - who currently thrive under supply management achieved by quotas and a tariff wall against foreign cheese and milk - and export-focused beef ranchers.

Ottawa and Brussels started negotiations on a trade deal in 2009, targeting end-2011 as the likely completion date.

But talks have just dragged on even though the two sides have agreed not to liberalize sensitive areas of beef, pork, and sweet corn for the EU, and dairy, poultry and eggs for Canada, and instead boost market access with bigger quotas.

Establishing those quotas has proven "a major stumbling block," according to the EU General Secretariat, which accuses Canada of wanting to ship large volumes of beef and pork to the EU while offering "very modest" access for European dairy products.

Canadian Prime Minister Stephen Harper said on Wednesday his government would not be rushed into signing a free trade agreement with the European Union this week just to coincide with meetings he is holding with European leaders.

Talks are complicated by the fact that both sides are looking beyond this deal, said James McIlroy, an advisor to the Canadian trade minister during the 1980s U.S. free trade talks.

If the EU boosts access for Canadian beef, it will face pressure to do the same for the United States in any future U.S.-Europe trade deal, while Canada knows new access for European dairy will come into play in talks on a Trans-Pacific trade partnership.

And even if the trade chiefs agree, the European Parliament and the EU’s 27 member states must all approve a deal. Irish or French opposition to a high beef import quota or a low dairy export allowance could sink an accord.

Agriculture represents less than 5 percent of the Canadian economy, and yet the lobbying muscle of supply management groups representing dairy, poultry and egg farmers, has caused Ottawa to tread cautiously, McIlroy said.

"All political parties in Ottawa are captive to supply management and they’re frightened of them," he said.

In Europe, the situation is similar. Agriculture makes up barely 2 percent of EU gross domestic product, but absorbs some 40 percent of the EU’s budget. Farming lobbies are strong, able to shut down national capitals with tractor blockades and to influence voting in rural constituencies.

Looking at specific issues, farmers in Ireland, which exports 90 percent of its beef, mostly to other EU countries, fear being undermined by cheaper Canadian supplies, given that Canada imposes fewer costly regulations on its cattle industry.

"It’s like tying my hands if thousands of ton come in and undermine the price," said Henry Burns, a farmer with 60 beef cattle in central Ireland and chairman of the Irish Farmers’ Association’s national livestock committee. "If the standards were the same, then we would have some hope."

The Canadian beef industry says it is not worth setting up separate production lines to ensure meat achieves EU standards unless it can export a significant annual volume - presumably more than the 40,000 tons that EU Ambassador Matthias Brinkmann tipped in May as a possible target.

Canada is the world’s seventh-largest beef and veal exporter, and the EU is the third-biggest consumer.

At present, Canada shares two quotas with other countries for beef exports to the European Union, totaling nearly 60,000 ton annually.

Canadian pig farmers are also seeking their own duty-free quota for pork, rather than sharing a quota with other countries, said Gary Stordy of the Canadian Pork Council.

Cheese is another contentious issue, given Canada’s status as the world’s seventh biggest cheese consumer. Almost all the 320,000 tons of cheese that Canadians consumed last year was produced at home, with European imports just 13,000 tons.

Pekka Pesonen, secretary general of the EU farmers association Copa-Cogeca, said a mooted Canadian offer to nearly double imports of European cheese by allowing in another 12,000 tons per year was far too low.

"We have to accept a quota for Canadian (beef) exporters, but there has to be something in return. The balance is not even close yet. We need far better access," he said.

But Wally Smith, president of the vocal Dairy Farmers of Canada, which follows the Canadian government to each round of trade talks, said allowing more European cheese wouldn’t be a fair fight, given high European subsidies.

The Canadian government, falling in popularity, cannot weaken protection for the dairy farmers without drawing fire from the separatist provincial government in vote-rich Quebec.

"We stand behind the supply management system," Quebec Premier Pauline Marois told reporters on Monday. "It has allowed farmers to make a decent living from their production."

McIlroy, the former Canadian trade advisor, said the deal must get done this month or it may "crater," because EU talks with the United States begin next month, taking the focus away from Canada.

"Trade agreements have a certain life," he said. "They either get done in a certain number of years or they don’t happen."