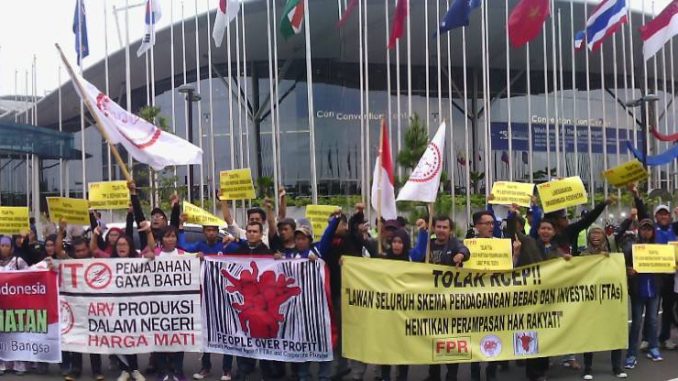 Jakarta, Indonesia - The Asian Peasant Coalition (APC) and the Aliansi Gerakan Reforma Agraria (AGRA) together with the International League of the People Struggle (ILPS)-Indonesia and the People Over Profit (POP), held series of activities to protest the 16th round of negotiations of the China-led Regional Comprehensive Economic Partnership (RCEP) which was held in Indonesia on December 6 to 9.

The RCEP remains under negotiation between all ten ASEAN member states and six of its major trading partners. It has a target completion date on 2017. There had been no official draft text available to the public but leaked texts show similarities and in some chapters, even worse provision than those posed by the Trans-Pacific Partnership Agreement (TPPA).

“We expect an intensifying landgrabbing and militarization of peasant communities, worsening unemployment and deepening poverty in Indonesia, once RCEP is ratified,” said Rahmat Ajiguna, APC secretary general based in Indonesia.” Under the RCEP leaked services text states that .… RCEP will not discriminate foreign firms, not ban foreign land ownership and land grabbing nor restrict foreign corporations entry. It is very clear that RCEP means land grabbing.”

“Militarization will also escalate under RCEP, in order to protect the companies interests they will employ guards or military which in turn will harass or forcibly evict farmers from their communities. Currently, under the Jokowi administration, human rights violations against the farmers resisting land grabbing have escalated. AGRA recorded at least 138 incidents wherein 648 people were arrested, 235 people were shot and 10 people died due to land grabbing. In the Philippines, the Kilusang Magbubukid ng Pilipinas (Peasant Movement of the Philippines) reported that 18 farmers fighting for their right to land were killed since Duterte assumed presidency on June 1,” added Rahmat, also the Chairperson of AGRA.

“At present, criminalization of agrarian cases victimizing peasants who are defending their lands against corporate plantations, mining, mega-dams and other so-called development projects, are also happening in Cambodia, Sri Lanka, Pakistan and India,” remarked P. Chennaiah, APC Chairperson and general secretary of the Andra Pradesh Agricultural Workers Union (APVVU) based in India .

Chennaiah explained that ”through RCEP, seed giants like Monsanto or Syngenta will give a legal monopoly over seeds, including farm-saved seeds, for 20 years or more. This goes beyond the requirements of the World Trade Organisation’s (WTO) agreement on Trade-Related Aspects of Intellectual Property Rights (TRIPS).”

Chenaiah said that, “RCEP will also regulate easing trade barriers between the weaker economic countries, which will allow the dumping of imports of agricultural products from the rich industrialized countries that can be sold at lower price than local products. This kind of trading chaos will place the peasants at a losing end in the market and may even cause the total destruction of local agricultural production systems. With this, we vow not to pass RCEP. We also urge the Government of Indonesia to stop negotiations and withdraw from RCEP.”

The series of protest activities against the RCEP negotiations in Indonesia was hosted by the Aliansi Gerakan Reforma Agraria (AGRA) together with the Front Perjuangan Rakyat (FPR) or the People’s Struggle Front.