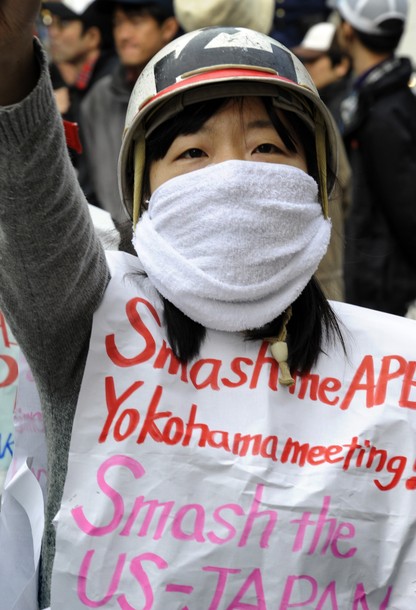 Asia-Pacific leaders said they will take “concrete steps” toward creating a “comprehensive” regional free-trade agreement, without setting a target for achieving that goal.

“We reaffirm our unwavering commitment to achieving free and open trade and investment in the region,” the heads of the 21-member Asia-Pacific Economic Cooperation forum said today in a statement in Yokohama, Japan. “We will work to address non- tariff barriers to trade, including by increasing regulatory cooperation.”

The gathering, attended by the leaders of the U.S., China, Japan and Russia, marked the conclusion of four days of summit talks that highlighted divisions over global imbalances. The Group of 20 on Nov. 12 in Seoul pledged to “oppose protectionist trade actions” while failing to agree on a remedy for trade and investment distortions.

Japanese Prime Minister Naoto Kan said APEC, which accounts for more than 50 percent of the global economy and almost 45 percent of its trade, “will move forward to make the Free Trade Area of the Asia-Pacific a reality.”

Still, divisions among the member countries persisted. Chinese President Hu Jintao indicated no change in his country’s currency policy a day after U.S. President Barack Obama in Seoul called the yuan “undervalued.” Kan yesterday met with Hu and Russian President Dmitry Medvedev over separate territorial disputes, and while all sides agreed on improving ties, no concessions were forthcoming.

“The APEC meeting was overshadowed by G-20, where countries were divided over the yuan and other currency policies,” said Koji Murata, professor of international relations at Doshisha University in Kyoto. “The result was vague and lacking substance.”

APEC leaders said the region “is recovering from the recent economic and financial crisis, but uncertainty remains.” Echoing the G-20 statement, the group called for greater currency flexibility and warned against volatile movement in the foreign exchange market that can disrupt economic growth.

“We will move toward more market-determined exchange rate systems” and “refrain from competitive devaluation of currencies,” the statement said. Advanced countries will be vigilant to “help mitigate the risk of excessive volatility in capital flows facing some emerging market economies.”

The group agreed on building trade through regional groups including the Association of Southeast Asian Nations and negotiations such as the U.S.-led Trans-Pacific Partnership.

Kan, who favors joining the TPP talks, faces resistance from his own party amid a backlash from Japan’s farmers who benefit from tariff protection. His Cabinet last week agreed only to begin preliminary discussions on the negotiations, a move Obama told Kan he “very much welcomed.”

Obama flies home today having fallen short in some of his goals during his 10-day Asian trip. He failed to secure a G-20 agreement on concrete steps to rebalance the global economy, and had to extend talks on securing a South Korean trade deal central to his goal of boosting U.S. exports.

Kan and Hu agreed to improve ties between Asia’s two biggest economies that soured after a Chinese fishing trawler collided with Japanese Coast Guard boats near islands claimed by both countries. China responded to the 17-day detention of the fishing boat captain by cutting ministerial ties and reportedly delaying shipments to Japan of rare-earth minerals.

“I got the impression that this will be resolved soon,” Ohata said.

Medvedev, in his meeting with Kan yesterday, proposed boosting economic ties as a way to ease tensions after he visited one of four islands also claimed by Japan. Kan said that while economic cooperation is the “first priority,” he protested Medvedev’s trip, calling the islands “our territory,” Japanese government spokesman Tetsuro Fukuyama told reporters yesterday.

Medvedev reiterated that the islands, seized by the Soviet Union at the end of World War II, belonged to Russia, Foreign Minister Sergei Lavrov said.

China is Japan’s biggest trading partner. Two-way trade rose 31 percent in the first nine months of the year, to $216 billion, compared with the same period a year ago, according to the Japan External Trade Organization. Trade with Russia in the same period was $17.3 billion.