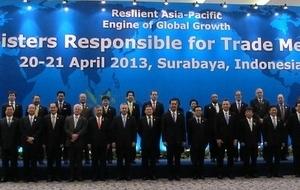 SURABAYA, INDONESIA – The trade ministers of the Asia-Pacific Economic Cooperation forum agreed Sunday to promote free-trade agreements in the Asia-Pacific region just a day after Japan won permission to negotiate a free-trade pact involving many of its members.

“We reaffirmed the importance of APEC’s meaningful contribution . . . guiding the process of FTA/RTA (regional trade agreement) development in the Asia-Pacific region,” the ministers said in a joint statement released at the end of their two-day meeting in Indonesia’s Surabaya.

“We will continue to promote broader integration which includes trade and investment liberalization and facilitation in the APEC region,” it said.

The agreement came after Japan gained the backing of all 11 members Saturday to join the Trans-Pacific Partnership agreement, which including Japan will account for about a third of world trade.

The ministers agreed to share information on the free-trade initiatives, including the TPP and the Regional Comprehensive Economic Partnership, to set the stage for the eventual creation of a Free Trade Agreement Asia-Pacific, the statement said.

The APEC ministers also reaffirmed their commitment to reduce tariffs on environmental goods to 5 percent or less by the end of 2015, while also adopting Japan’s proposal to promote cross-border mechanisms for spreading low-carbon technologies.

Among other topics, the ministers called for strengthening supply chains and other aspects of regional connectivity in light of global financial crises and natural disasters that have severely impacted its members, such as Thailand, which was hit by floods in 2011 that disrupted Japan’s auto industry.

They also expressed concern about the slow progress of the World Trade Organization’s multilateral trade negotiations on eliminating tariffs. Ministers said the negotiation “is not on course to lead to a successful outcome” at the WTO ministerial conference to be held in December in Bali, Indonesia, and urged WTO members to become more engaged.