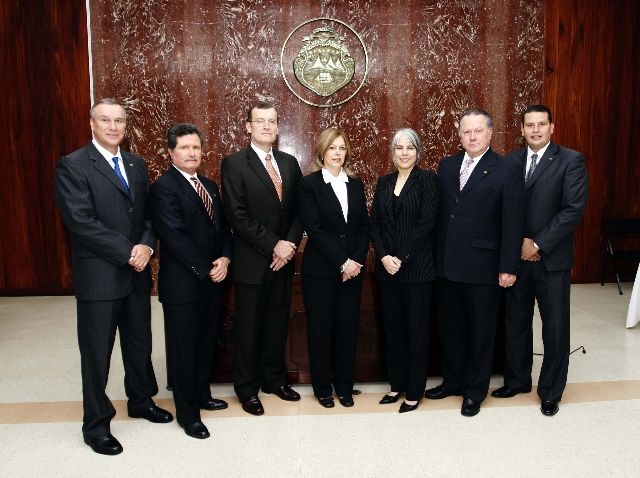 The government of Oscar Arias knew, in advance, how and when the Constitutional Court would vote on the vital project to implement the Free Trade Agreement with the United States, Central America and the Dominican Republic - CAFTA (the Tratado de Libre Comercio - TLC in Costa Rica), after being challenged in a first review by the judges, as mentioned in a cable from the 2008 U.S. Embassy in Costa Rica.

The then Deputy Minister of the Presidency, Robert Thompson, was the one who broke the news to U.S. diplomats, as stated in the document, signed on Wednesday 15 October by the then U.S. ambassador, Peter E. Cianchette (June 2008 to July 2009).

"Deputy Robert Thompson, who is managing the process for the presidency, was cautiously optimistic when we met with him on 14 October. The Constitutional Court has given indications that informal review completed well before the 30 days remaining and did not present new concerns about the amended law" the document quoted.

Thompson, now mayor of Alajuela, denied making that comment. "If that is quoted and is absolutely false. I never dared to say something similar. We have always been quite respectful of the process, I never had any contact with any representative of the Constitutional Court", he added.

Judge Virginia Ana Calzada, president of the Constitutional Court, said yesterday that the judges do not advance opinion on the subjects they study and conclusion by Thompson was speculation. She reiterated that the seven judges voted without external influences. In distress. The project referred to the cable, which is described, general multiple pressures in all branches of government is the "Law of reforms of several rules governing matters relating to intellectual property", which was the last outstanding approval to implement the Free Trade Agreement between the United States, Central America and Dominican Republic (CAFTA).

The enactment of this law depended on the FTA going into effect before the deadline, October 1, 2008.

However, a month before Sept. 11, the Sala had found unconstitutional a part of the initiative because it included changes to the Law on Biodiversity that was have consulted the indigenous communities and was not done.

When the project came back to Congress, deputies quickly eliminated a paragraph of text to avoid making the consultation of indigenous and approved it in first debate, on October 16.

Opposition deputies sent back the bill for a consult of the Court, which ruled on October 31, according to the prediction attributed to Thompson in the cable: in just 13 days, with majority approval. Judges Gilbert Armijo Fernando Cruz and opposed.

Calzada said that consultation was resolved in a short time because the Court had reviewed the file before.

Confident. Luis Paulino Mora, President of the judiciary, who authored the first resolution found difficulties in the plan, on September 11.

One day after the ruling, amabassador Cianchette described his surprise at the behavior of Mora: "Later, we (and the Arias administration, no doubt) will look more carefully why the Court took this decision and why President Mora (who admitted to Ambassador recently the need to finalize the FTA) was the author".

The Chief Justice has denied its support for the FTA to the U.S. ambassador. "I do not remember talking to the ambassador, I commit with anyone. I could not have advanced any criteria", he said.

Mora voted in favour in the second review by the Court, which allowed the final approval of the law. The entry into force of the FTA was extended to January 1, 2009.

The judge is quoted in another cable of September 12, under which he advances to the then Vice President, Laura Chinchilla, the error pointed out by him was remedied. "The president of the Court had assured Chinchilla that the correction process should be manageable". That text says Chinchilla asked Mora to deliver the full resolution (the first) by September 16.

"I do not remember speaking with doña Laura in connection with CAFTA. What I was asked is what was that would bring down the project, I can say is that this was a correctabale procedural error", said President of the Court.

Chinchilla said that as Minister of Justice, she maintained contact with the judges. "I imagine that when we talk of issues that we talked about the need to correct that law, there was no other way. It is likely that the question of was that if it was correct or not".

In shock. Not only diplomats were surprised by the first vote of Mora and the Court. The then president, Oscar Arias, was also affected, according to a cable of October 17: "The President admitted that he and ’all others’ were absolutely certain that the latest CAFTA implementation would easily passed by the Constitutional Court".

Chinchilla and the former vice-minister of Foreign Trade, Amparo Pacheco, were also surprised in a meeting with the deputy chief of mission and embassy officials on September 12: "They reiterated that they had no advance information on the mysterious decision to some degree of Sala IV".

Previous pressures. The adoption of the law of intellectual property reforms was unveiled to Americans since July.

On the 31st of that month, the diplomats spoke to the then deputy liberationist Óscar Núñez on the chances of rushing it, it said.

"Nunez said that until the Constitutional Court, was aware of the deadline, you can press bit more. He said he would encourage the Minister of the Presidency Rodrigo Arias (whose office has extensive informal contacts with the Court) for an early review of two pending projects", he says in the cable.

Arias did not return two calls to inquire about the issue and the former deputy Núñez agreed that met frequently with representatives of the Embassy, but denied having said he would call Rodrigo Arias for that matter.

Editor’s note: The La Nación provides a link to to listen to the audio with reactions on this topic by Luis Paulino Mora, Ana Virginia Calzada, Robert Thompson and Laura Chinchilla. The link is incorrect and will update this page when the correct link is available.