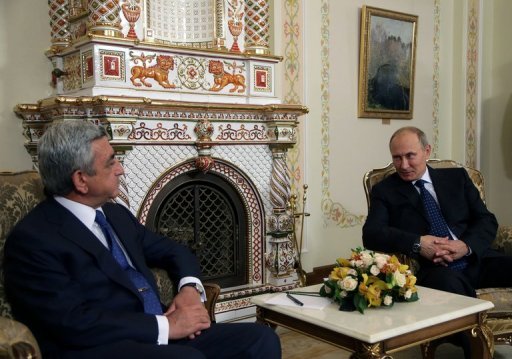 Armenia has blocked its chances of signing a free trade deal with the European Union by choosing to join the Russia-led customs union, EU president Lithuania said Tuesday.

"We respect any choice of countries but they cannot enter both organisations at the same time because of different tariff requirements," he said.

After meeting Russian President Vladimir Putin in Moscow, Sarkisian said he had decided to join the 2010 Customs Union that Moscow currently shares with ex-Soviet Belarus and Kazakhstan.

According to Putin’s vision, the Russian-led Customs Union, is the foundation of a future Eurasian economic union with its own executive body and a single currency.

Armenia had been poised to initial an association and free trade agreement with EU at a November summit in Vilnius with six post-Soviet states grouped in the Brussels-oriented Eastern Partnership programme.

Lithuania, which took over the six-month rotating EU presidency in July, has actively promoted the partnership.

Launched in 2009, it is aimed at bringing post-Soviet Ukraine, Moldova, Belarus, Armenia, Azerbaijan and Georgia closer to the EU, something which Moscow sees as encroaching on its sphere of influence.

Vilnius University analyst Vytis Jurkonis said Tuesday Armenia’s move was "part of the bigger game" by Russia which has recently warned Ukraine and Moldova that deals with EU may harm their economic ties with Moscow.

"Russia is increasing pressure on Eastern Partnership countries so they do not sign association treaties" with Brussels, Jurkonis told AFP.

In a separate statement on Tuesday, Linkevicius and seven other ministers from Nordic and Baltic countries warned against Russian pressure on post-Soviet states.

"Any economic threat or political pressure directed against Eastern partners because of their European aspirations and engagement with the EU is unacceptable," they said.

Russia has for years tried to get neighbouring Ukraine to join the Customs Union.

Kiev has so far resisted the pressure and hopes to sign a landmark political and economic agreement with the EU at the Vilnius summit.