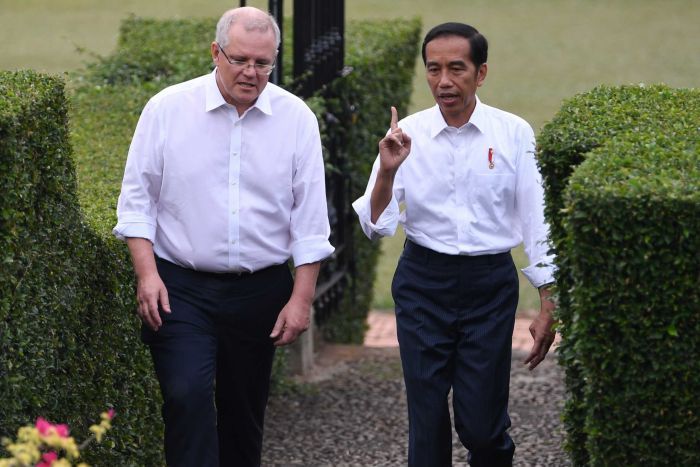 Australia Indonesia free trade deal to be signed next week

Jakarta: Australia and Indonesia are poised to sign the landmark Australia-Indonesia free trade deal next week at the ASEAN summit in Singapore.

Fairfax Media has confirmed with three sources in the Indonesian government that the two countries plan to ink the agreement on November 14, the second day of the summit, which brings together world leaders from the Asian region.

The signing of the document is a win for the Morrison government, and comes after the Prime Minister announced a review of whether to move the Australian embassy in Israel from Tel Aviv to Jerusalem and to extend diplomatic recognition to Jerusalem.

But political analysts warn that if the embassy move goes ahead, ratification of the deal by Indonesia’s parliament could be delayed for months – even after it is signed by the two trade ministers.

Australian Prime Minister Scott Morrison and President Joko Widodo will both be in Singapore to witness the historic signing by off by trade ministers Simon Birmingham and Enggartiasto Lukita.

A senior source in Jakarta, who asked not to be named, confirmed "if things go as planned, it will be on the morning of November 14".

The source said that translation of the text into Bahasa Indonesia had been completed, and that the "legal scrubbing" process – which ensures the deal complies with local laws in both countries – has been finished too. Two other sources confirmed the signing was planned for next week.

The details of the free trade deal, which will boost Australian exports of beef and wheat and open the Indonesian market up to Australian healthcare and education providers, were agreed in August.

Political blow back over the embassy proposal in Indonesia, the world’s largest Muslim-majority nation, has been relatively restrained, but opposition could become more serious if Australia does decide to go ahead with the Jerusalem embassy move.

Last week, Jakarta’s former top diplomat in Canberra Nadjib Riphat Kesoema said he was "shocked" by the embassy proposal and urged Australia to adopt foreign policies that were more independent of the US.

Lowy Institute non-resident fellow Matthew Busch said the signing of the much-delayed deal would be good news for the Morrison government and the bilateral relationship, "but the Indonesians have been very clear that this embassy move is a very important issue for them and it could become a domestic issue for their government".

"If Australia pressed ahead after the review of the location of the embassy in Israel there is no guarantee that the free trade deal road map would be adhered to," he said.

Mr Busch said it was possible that ratification of the free trade deal – formally known as the Indonesia-Australia Comprehensive Economic Partnership Agreement – could be delayed by the Indonesian parliament, given domestic political sensitivities over the status of Palestine.

With Indonesians due to head to the polls in April 2019 to vote in presidential and parliamentary elections, it is also possible opposition parties could stir protests over the deal – as occurred when US President Donald Trump announced his country would move its embassy to Jerusalem – and cause a major headache for Mr Widodo.

The Australian trade deal was due to be signed at a recent conference in Bali on the health of the world’s oceans but was delayed.

Last week, former prime minister Malcolm Turnbull warned after meeting Mr Widodo that moving the embassy would meet a "very negative reaction" in Indonesia. He said, however, that he expected the trade deal would be signed in a matter of weeks.