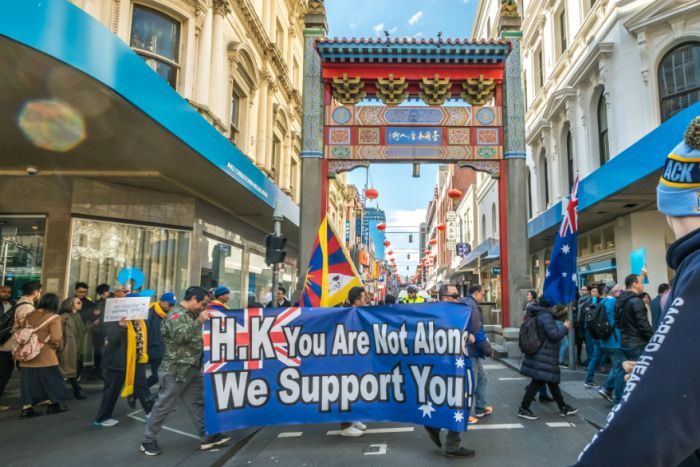 Australia will ratify a controversial trade deal with Hong Kong despite growing concern over Chinese government control of the city and the brutal treatment of protesters demanding universal suffrage for its people.

One day after Liberal backbencher Tim Wilson marched with the protesters, the government insisted it should endorse the free trade agreement in order to confirm the autonomy of Hong Kong and its "economic freedoms" as a special region.

Parliament’s treaties committee appears likely to reach the same conclusion in the coming days but it will also object to the use of emergency law to curb the protests.

The moves clear the way for a symbolic tightening of the ties between Australia and Hong Kong while sending a message to the Chinese communist government to honour the ’one country two systems’ pledge it made when took control of the city from Britain in 1997.

The chairman of the treaties committee, Liberal MP Dave Sharma, said he was concerned at the response to the protests as well as the way the pro-democracy movement had listed demands that could be impossible to satisfy, such as universal suffrage.

Mr Sharma said any attempt by Australia to halt the trade deal because of the protests could be seen as a "crude attempt to interfere" in Hong Kong’s affairs by setting conditions for the FTA.

"While being mindful of the current political instability in Hong Kong, I think the FTA can reaffirm Hong Kong’s unique status within ’one country two systems’ and reaffirm its unique constitutional arrangements," Mr Sharma said.

Mr Sharma stressed he was not speaking on behalf of the committee, which is due to release its formal conclusions within days.

Mr Wilson, another member of the committee, showed his support for the protesters by marching with them in Hong Kong on Sunday and praising their courage "on the front line" in defending democracy.

"Average Hong Kong residents are fighting for liberal democratic values like universal suffrage," Mr Wilson told The Age and The Sydney Morning Herald after returning to Melbourne on Monday.

"As a liberal democrat it is hard not to side with a people expressing a basic yearning for what we take for granted."

While trade between Australia and Hong Kong is already largely free, the new agreement was signed in March to remove some of the last barriers under legislation expected by the end of the year.

Labor MP Peter Khalil, the deputy chair of the committee, said it was valid to argue that ratifying a trade agreement with Hong Kong recognised the unique nature of its autonomy including the rule of law, democratic freedoms and an independent judiciary.

However, he suggested there could be grounds for delaying the trade deal.

"If the ongoing political and security instability in Hong Kong leads by degrees to the diminution of its unique autonomous status as enshrined within the Basic Law, including a diminishment of its rule of law, freedom of expression, limited democratic rights, and an independent judiciary that in my personal view would be cause for the government to reconsider the timeline for ratification," he said.

Another member of the committee, Greens Senator Jordan Steele-John, is expected to issue a minority report rejecting the trade agreement.

With the timing likely to be a point of contention, one option is to delay the formal signing until the situation in Hong Kong stabilises.

One of the pro-democracy groups in Hong Kong, Demosisto, lodged a submission with the treaties committee last month urging it to add a condition to the trade agreement to suspend the deal in the event of a breach of human rights, but this appears unlikely.

Trade Minister Simon Birmingham said the Morrison government urged all parties to resolve their differences peacefully but that the trade deal should proceed.

"It would be foolish to undermine Australia’s long-standing support for the ’one country two systems’ approach by delaying the swift implementation of this agreement with Hong Kong," he said.

"Australia places great value on the economic freedoms and degree of autonomy that Hong Kong has under the ’one country two systems’ framework, and this free trade deal which our two governments have negotiated reaffirms those opportunities for trade and investment to flow into the future."