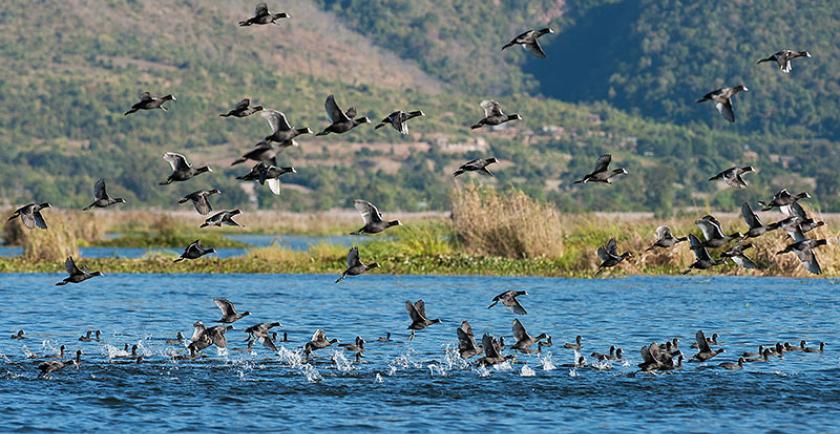 The Belt and Road Initiative puts Myanmar’s natural capital and the lives and livelihoods of 24 million people - half of the country’s population - at risk, according to a report from World Wide Fund for Nature in Myanmar.

Road projects proposed as part of China’s Belt and Road Initiative would provide transport infrastructure to areas of the Ayeyarwady River Basin and surrounding mountain areas, which are home to approximately 24 million people – almost half of Myanmar’s national population. These people rely on natural capital, including forests, rivers, land and biodiversity, for a range of benefits, such as potable water and natural disaster mitigation.

We must better take into account information about the environment, when roads and other projects are planned and designed. Sai Nay Won Myint, WWF

“There is a risk that benefits of BRI road projects could be replaced by substantial social, environmental and economic costs, if roads are constructed in ways that fragments the ecosystems, endangers wildlife, or contributes to deforestation, landslides, and pollution. Through better planning and design, these risks can be avoided and mitigated,” Hanna Helsingen, green economy programme and policy manager at WWF-Myanmar commented. The report, released last month, seeks to provide a rapid assessment of Belt and Road-related opportunities and risks for Myanmar in terms of natural capital impacts and dependencies.

Vicky Bowman, director of Myanmar Centre for Responsible Business, said that issues could be avoided if infrastructure projects are planned and designed in line with Myanmar’s EIA framework, with assessments carried out in a manner which meets the standards of the International Finance Corporation (IFC) and World Bank, including undertaking meaningful consultation and revisions to prevent, reduce and mitigate impacts.

“There are certainly gaps in laws. For example, Myanmar does not have a full set of environmental and construction standards yet, and there are no rules on biodiversity offsets.

“But the challenge is predominantly one of government enforcement, and by extension, developer attitude. Some developers seek to apply the law by doing projects to international standards. Others cut corners and try to do as little as possible, unless they are called to account by governments or others,” the expert explained. 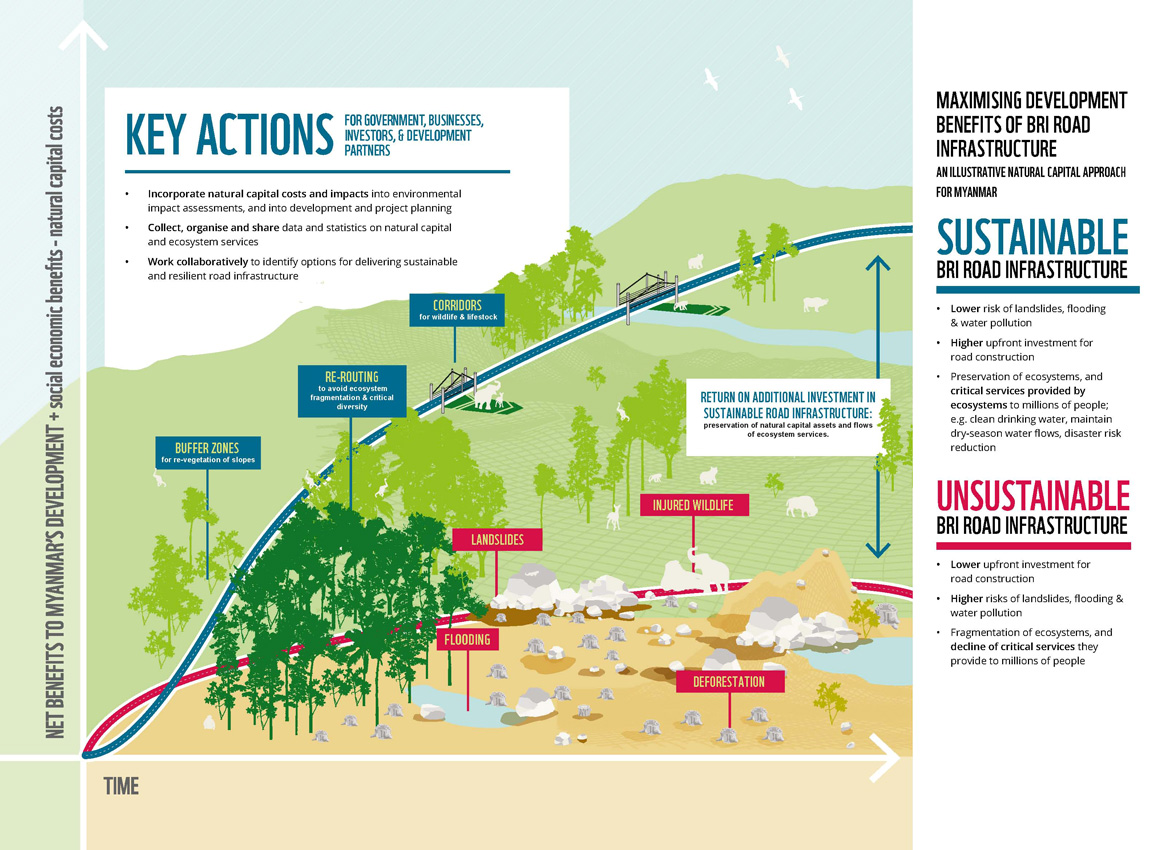 “The report focuses on how construction of infrastructure in two proposed East-West and North-South road corridors depend and could affect on the country’s natural capital assets, the very foundation of Myanmar’s sustainable development,” Sai Nay Won Myint, WWF’s green economy officer further added.

Myanmar’s natural capital is vital for mitigating the severe impacts of natural disasters on the country’s built infrastructure, including roads. Report, WWF

A core part of the Beijing-led Belt and Road Initiative is the creation of economic corridors to boost connectivity, improve trade of goods and facilitate investments. This will in turn catalyse the trade in services and tourism.

The BCIM corridor is designed to strengthen connections between China’s Yunnan Province and the neighbours, as well as integrating the regional economy in the Bay of Bengal while the latter captures many of China’s connectivity projects within ASEAN.

Roads and road construction in the BRI’s East-West and North-South corridors could make significant contributions to Myanmar’s socio-economic and infrastructure development. Roads in these corridors would connect major urban centres and communities across the country with major cities and markets in neighbouring countries, notably Bangladesh, China and India.

Experience in other developing economies reveals that BRI road proposals in Myanmar could potentially enhance access to jobs, education and healthcare, improve economic productivity, raise incomes, reduce trade costs and barriers and accelerate growth of both agriculture and industrial clusters.

However, the report went on to argue that BRI road infrastructure could affect natural capital assets and associated benefits which people enjoy from natural capital. This includes lower risk of landslides, flooding and water pollution. The publication also noted how the resilience and durability of the BRI road corridors would potentially depend upon “ecosystem services” – flood and erosion risk reduction offered by natural ecosystems.

The BRI corridors cut through the areas of the Ayeyarwady River Basin and surrounding areas which accommodate around 24 million people. These people rely on the natural capital to access potable water, main dry-season water supply, reduce risks from natural disasters, among other critical reliance.

There is a risk that benefits of the BRI projects could be undermined by considerable socio-economic and environment costs which would happen if roads are built without taking into account the environment, wildlife and its implications on communities.

“We must better take into account information about the environment, when roads and other projects are planned and designed. This is the only way we can actually avoid negative environmental and social impacts, which is much economically cheaper than mitigating impacts at a later stage of the project,” Sai Nay Won Myint added.

1. The need to ensure that the BRI follows a sustainability criteria or standard based on ‘Guidance on the Building of the Green Belt and Road’ released from the Ministry of Environmental Protection of China, global sustainability standards or nationally developed standards for sustainable infrastructure development.

2. More assessments to better understand risks related to for example floods, erosion and biodiversity, and for this information to be incorporated into road plans and designs as well as high quality Environmental Impact Assessments and Environmental Management Plans (EIAs).

4. The BRI design should enhance environmental, social and economic benefits, including buffer zones, re-vegetation of slopes and wildlife corridors.

5. Myanmar civil society should be included at all levels and stages of project planning to avoid negative social and environmental impacts and optimise benefit sharing of the BRI in Myanmar.

What is natural capital?

Natural capital is a term for the stock of renewable and non-renewable resources – e.g. plants, animals, air, water, soils and minerals – which combine to yield a flow of benefits to people.