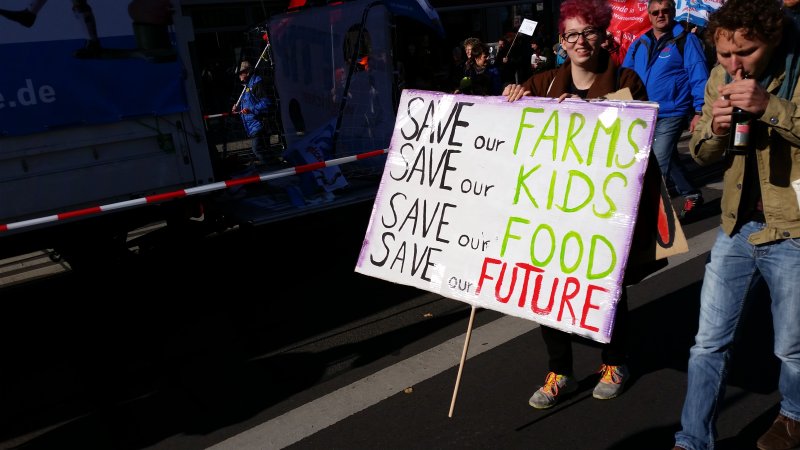 Hundreds of thousands of people marched in Berlin on Saturday to oppose a planned free trade deal between the European Union and the United States that is claimed to be anti-democratic and to threaten food safety and environmental standards.

The environmental groups, charities and opposition parties that organised the protest claimed 250,000 people took part, while a police spokesman said 100,000 attended. Smaller protests were also held in other cities, including Amsterdam, with a rally due to be held in London on Saturday night at which shadow chancellor John McDonnell is scheduled to speak.

The Transatlantic Trade and Investment Partnership (TTIP) would create the world’s largest free-trade zone, encompassing some 800 million consumers, and harmonise regulation between the EU and North America in areas ranging from food safety law to environmental rules and banking regulations. It would mean that cars made in Britain could be sold in the US, for example, but opponents say it would water down important EU regulations.

However, opposition has escalated over the past year in Germany and other European countries, with critics pointing out that the deal will give too much power to multinational companies at the expense of consumers and workers.

Negotiations have mostly been conducted in secret. Dieter Bartsch, the deputy leader of Germany’s parliamentary group for the Left party, said he was concerned about the lack of transparency: “We definitely need to know what is supposed to be being decided.”

The British government argues that the TTIP would boost trade and create jobs. Of the 3 million people who have signed an online petition calling on the European commission to abandon the deal, some 500,000 are from Britain.

Nick Dearden, director of Global Justice Now, said the petition showed that the EU did not have a public mandate for the agreement: “Everything that we know about this secretive trade deal shows that it is very little about trade and very much about enshrining a massive corporate power-grab.”

The level of resistance in Germany has surprised chancellor Angela Merkel’s government, with Saturday’s rally underlining the challenge it faces to win public support for the deal.

In a full-page letter published in several German newspapers on Saturday, the economy minister, Sigmar Gabriel, warned against scaremongering. “We have the chance to set new and goods standards for growing global trade, with ambitious standards for the environment and consumers, and with fair conditions for investment and workers. This must be our aim,” he wrote.

Ulrich Grillo, head of the BDI federation of German industries, said: “A fair and comprehensive free-trade deal promotes growth and prosperity in Europe. We should actively participate in the rules for world trade of tomorrow.”

An agreement was announced this week on another trade deal, the Trans-Pacific Partnership (TPP), which involves 12 countries including the US, Japan and Australia. It has attracted criticism from the likes of US presidential hopefuls Hillary Clinton and Bernie Sanders.

Wikileaks has released what it claims is the full intellectual property chapter of the TPP. Both the TTIP and TPP deals are still being negotiated.