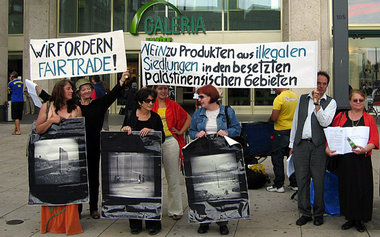 BERLIN — The opening of "Israel Week" at the Galeria Kaufhof department store in Berlin spurred a demonstration Saturday against Israeli food products originating in the territories.

Groups protesting included The Jewish Voice, a Jewish-German organization opposed to the occupation, and Solidarity with Palestine, German teenagers affiliated with the radical left.

"We have to encourage the Germans to be more critical of the Israeli occupation," said Ruth Fructman, a Berlin journalist who was demonstrating.

"Right now it’s still hard for them, especially because every time they criticize Israel, they’re accused of anti-Semitism," she said.

Martin Vorberg, of the Middle Eastern Workgroup, said the demonstration was aimed at Osem Industries, which he said has a factory in the territories, and spices from Amnon and Tamar, a company located in Alfei Menashe.