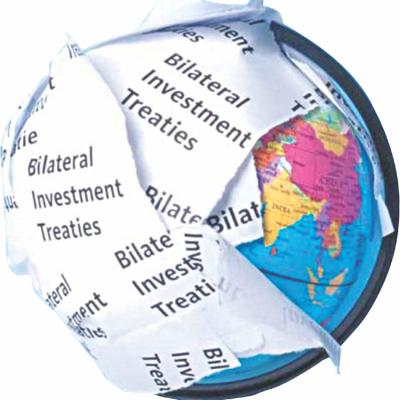 BITs of Bangladesh Are they national interest friendly?

Bilateral investment treaties (BITs) contractualise agreed upon legal obligations for the safest possible protection to each other’s foreign direct investments (FDIs) in the parties’ territories. BITs are concluded for the parties’ mutual benefits and common interests and serve as conduits for two-way FDIs. The reality in most cases is that FDIs flow in only one-way, from capital exporting developed states to capital importing underdeveloped states, which are often vulnerable in negotiations and the victims of overly imposing BITs due to their unequal and inferior bargaining power.

The FDI laws of Bangladesh have no specific method of FDI dispute settlement. Its National Investment Policies 2005 contains an oblique reference to ’international norms and system in conflict resolution’ (ch 14). This expression is ambiguous. There are no internationally standardised norms and systems, which are diverse in nature and scope. In this vacuum, FDI disputes resolution relies on relevant BIT provisions. Bangladesh has about 30 BITs of which those with international arbitration provisions tilt to protect corporate interests more than the national interest of Bangladesh as reflected in the Saipem, Chevron, and Niko arbitrations.

Saipem, an Italian company, and Petrobangla entered into a pipeline construction contract in 1990 with an arbitration clause for disputes to be settled in Dhaka under the International Chamber of Commerce (ICC) arbitration rules. There was a dispute over compensation for delayed completion of the project. Saipem invoked the ICC arbitration. The High Court Division of the Supreme Court of Bangladesh (HCD) imposed an interim injunction in 1999, preventing Saipem from proceeding with the ICC arbitration for procedural irregularities, followed by the revocation of the ICC jurisdiction by the Dhaka court for ignoring the host state’s law and court. The ICC tribunal defied this court order and continued with the arbitration arguing that the Bangladesh courts lacked jurisdiction and their orders violated obligation for international arbitration. The ICC award in 2003 went in favour of Saipem. It held Petrobangla responsible for breaching contractual obligations by not paying compensation for the additional works required for completion and ordered to pay compensation including accrued interest. Petrobangla went to the HCD to set aside the ICC award, which was held a nullity by the HCD.

Following its failure to enforce the ICC award in Bangladesh, Saipem invoked the BIT between Bangladesh and Italy 1990. Its Article 9(2) gave a free hand to Saipem to submit its dispute at its ’discretion’ to ’an ad hoc Arbitration Tribunal’ explicitly mentioning ICSID. Saipem merely exercised this discretion by opting for ICSID. This BIT also contains a provision on indirect expropriation: ’Investments of investors of one of the Contracting Parties shall not be directly or indirectly nationalised, expropriated, requisitioned or subjected to any measures having similar effects in the territory of other Contracting Party’ (Article 5(2)). The expressions ’any measures’ and ’similar effects’ are undefined and open-ended, which arguably allowed ICSID tribunal to hold that the HCD revoking the ICC arbitration and award deprived Saipem of the financial benefit of the ICC award, amounting to ’measures having similar effects’ and hence indirect expropriation (ICSID Case No ARB/05/7, award of 30 June 2009 paras 122, 124, 153).

Chevron, a US MNC,was exploring and producing, under a production sharing contract with Petrobangla, natural gas from Jalalabad field and transmitting into the state-owned national gas network through Petrobangla’s pipeline. Petrobangla charged 4% tariff for the use of its pipeline and deducted it from its payment to Chevron for the purchase of gas from the Jalalabad field. Chevron claimed that this deduction deprived Chevron of its full investment benefits. Chevron requested for ICSID arbitration in March 2006. Petrobangla participated in ICSID arbitration in 2009 and pleaded that its deduction was fair and legal under the contract.

Bangladesh objected to ICSID jurisdiction, arguing that the dispute was not an investment dispute as the gas sale proceeds did not constitute an investment under the ICSID Convention, which requires such money/proceed needs to be invested to earn interest/profit (Art 25(1)).This definitional argument was narrow and self-contradictory with Bangladesh’s own practice of broad definition in BITs. Its BIT with the US 1986 defines investment as ’every kind of investment owned or controlled directly or indirectly’ including ’a claim to money or a claim to performance having economic value’ (Art 1). The definition of investment in its BIT with the UK 1981 says: ’every kind of asset’ including ’claims to money or to any performance under contract having financial value’ is an investment (Art 1). The Niko-BAPEX joint venture agreement specifies that disputes would be resolved through ICSID arbitration (Art 18). Its dispute settlement procedure does not require the exhaustion of domestic remedies as a requirement for resorting to external remedies, which allowed Niko to avoid the Bangladesh court’s jurisdiction.

Some of BIT arbitration commitments and obligations assumed by Bangladesh are overly generous militating in favour of the foreign investors, which may have unwitting implications for development and economic sovereignty should disputes arise. Presumably, negotiators agreed with such BITs only to attract FDI with no diligent cost-benefit assessment of their effect on national interests. Understandably, neo-liberalism has become the new paradigm of global FDI market, which has progressively infiltrated many under-developed host states to limit their regulatory space and the jurisdiction of domestic courts. Operating within this legal systemic value, it is exceedingly difficult for Bangladesh not to join the race to the bottom, but it must be careful not to confer additional substantive or procedural rights on investors in BITs over and above those already available in its domestic law. Generous BITs expose Bangladesh to compromise its regulatory sovereignty in favour of private legal protection. Foreign investors navigate through these BITs to circumvent local laws to secure a favourable outcome.

FDI operation in host states usually involves a wide spectrum of socio-economic impacts that often generate public welfare and interest issues. Arbitrating externally in private and confidence these matters that are essentially domestic in nature, falling squarely under the domestic law and judiciary of host states should be considered as a last, not first, resort. This requires the exhaustion of domestic remedies of Bangladesh as a precondition for external arbitration. The legal status of private arbitrations must be appreciated (this issue will be discussed in next write-up). Although BITs are concluded under international law, BIT-based arbitrations are conducted under private international law to avoid obligations under international law and national law of host states. Being private international law dispute settlement between states and MNCs, foreign investors lack international legal personality and have only derivative rights curved out of state sovereignty and consenting rights. BIT arbitrators derive their adjudicative authority from state consent, which should be respected in good faith. If state consent is exploited in bad faith, its withdrawal may be a possibility as has happened in Bolivia, Ecuador, and Venezuela.

The BIT ratification process in Bangladesh warrants independent cost-benefit scrutiny by the public and stakeholders during and post-negotiation to avoid concluding BITs not in the best national interest. The Bangladesh model BIT, the Reciprocal Agreement on the Promotion and Protection of Foreign Direct Investment between Bangladesh and Others 2009 is a positive step in standardising its BIT provisions. BITs with international arbitration do not necessarily attract FDIs more than without. The 2010 Research Report of the Australian Productivity Commission found no evidence to ’suggest that ISDS provisions have a significant impact on FDI flows’ (p 271). BITs are in a declining trend due to increasing mega free trade agreements, such as the Trans-Pacific Partnerships, a pathway to unify regional and global investment law. FDI-led sustainable development in developing host countries has entered the mainstream of international investment policymaking. The Addis Ababa Investment Policy Framework for Sustainable Development 2015, Shanghai Guiding Principles for Investment Policymaking 2016, and G20 Leaders’ Hangzhou Declaration 2016 now overtly recognise the right of host states to regulate FDIs for legitimate public policy purposes (principle VI).UNCTAD Report 2017 also reveals that most modern BITs embrace sustainable development, preserve the right to regulate and duty to protect, ensure responsible investment, reform dispute settlement, improve systemic efficiency for promoting and facilitating FDIs. Contemplating these recent developments by BIT strategists, policymakers, and negotiators is likely to be rewarding in maximising the national interests of Bangladesh.