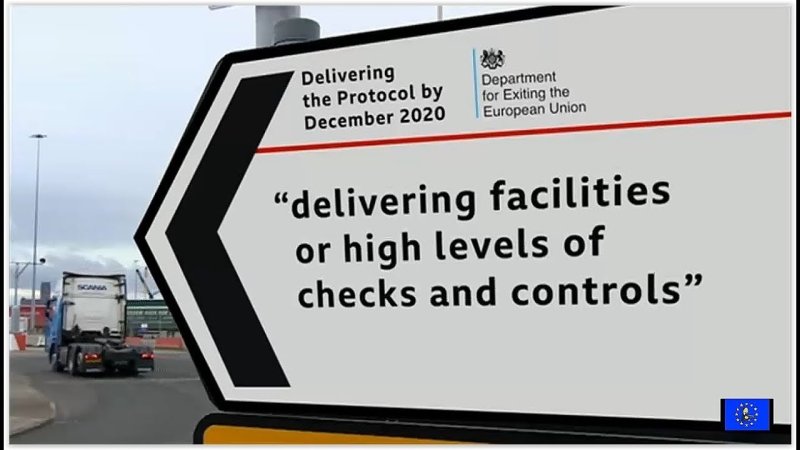 The Prime Minister was told on Monday night “a new partnership can only be built on the faithful and effective implementation of the Withdrawal Agreement”. European Commission vice-president Maros Sefcovic sent the warning to Cabinet minister Michael Gove in the first meeting of the Joint Committee set up as part of the UK’s EU divorce deal. It comes amid fears in the Belgian capital the Government will neglect its responsibilities in fully implementing the Northern Ireland protocol.

The Prime Minister’s EU Withdrawal Agreement sets out the introduction of customs checks for goods travelling between Great Britain and Northern Ireland.

Brussels wants to make the implementation of the new arrangements a key pillar of any future relationship.

In order to strike a deal, the Government is expected to “set out its plans over the coming months with regard to the implementation of the protocol on Northern Ireland”, according to an EU Commission statement.

It adds: “There is an urgent need to present a detailed timetable and proceed with the necessary measures, such as preparing for the introduction of customs procedures for goods entering Northern Ireland from Great Britain, and ensuring that all necessary sanitary and phytosanitary controls as well as other regulatory checks can be carried out in respect of goods entering Northern Ireland from outside the EU.”

In defence of the UK’s position, Mr Gove promised the Government remains committed to the Withdrawal Agreement and the Northern Ireland protocol.

The measures must be fully implemented during the post-Brexit transition period that comes to an end on December 31.

The Joint Committee will continue to meet in parallel with the trade negotiations, headed up by Michel Barnier and David Frost, to ensure both sides continue to comply with the terms of the Withdrawal Agreement.

Six sub committees have been set up to monitor citizens’ rights, the Northern Ireland protocol, Gibraltar and sovereign military bases in Cyprus, and the divorce bill.

After the UK and EU both shared their visions for a post-Brexit trade deal, officials from both sides will continue informal discussions on their individual legal texts throughout the week.

It is uncertain if next week’s scheduled negotiating round will go ahead as cases of deadly coronavirus continues to spread across the world.

A UK Government spokesman said: “The UK and EU have shared legal texts and informal discussions with the Commission are ongoing.”

Amid calls for Mr Johnson to consider extending Britain’s stay inside the bloc’s single market and customs union, the Government has reaffirmed that it plans to leave them both at the end of the year.

Senior MEPs from the European People’s Party, the EU Parliament’s largest political bloc, urged the Prime Minister to consider a policy U-turn because of the COVID-19 crisis.

“The EU has always been open to extending the transition period. The ball is now clearly in the British court.

“The United Kingdom would have to submit an official request. So far, the UK government has constantly rejected such an option. Under the current circumstances, London should carefully re-examine a prolongation."

But Mr Johnson has made clear to his lead negotiator, Mr Frost, his army of officials should continue working to their original timetable and not let the global pandemic stand in the way of securing Britain’s sovereignty.

A Government spokesman said: “The transition period ends on December 31, 2020, as enshrined in UK law, which the Prime Minister has made clear he has no intension of changing.”