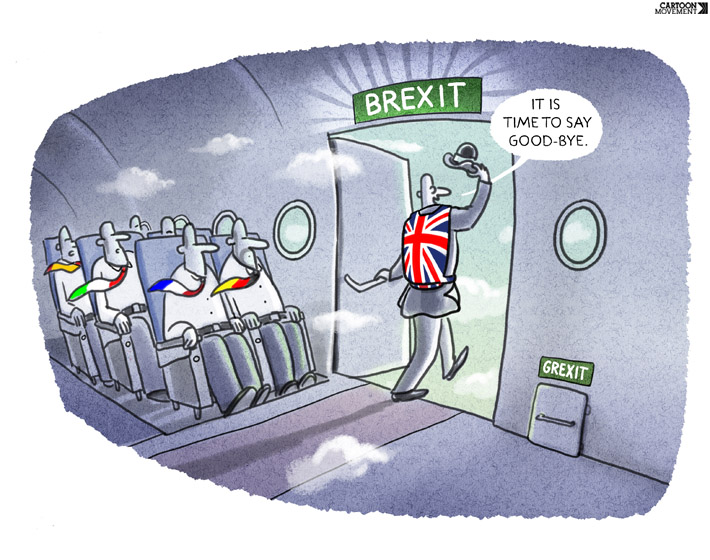 Brexit could become a money-making machine for law firms that make millions when corporations sue nation states via trade and investment agreements. Not only are these law firms paving the way for Brexit-related corporate claims against the UK, they are also building up the UK as a gateway for more investor claims against EU countries in the future.

While there have been many questions about how Brexit will affect different businesses in the UK, at least one sector, investment lawyers, are anticipating a bonanza. These law firms help corporations sue nation states via trade and investment agreements around the world – through a system known as investor-state dispute settlement (ISDS). Soon it could be the UK’s turn, as it risks facing a host of expensive lawsuits from corporations, especially if the terms of Brexit are unfriendly towards business. These same law firms are also anticipating another Brexit boom: they are drumming up business as, with the UK leaving the European Union, it could become a handy location from which to sue EU member states.

These ISDS cases are multi-million dollar affairs. For example, Germany is currently being sued by Swedish-based energy company Vattenfall for nearly €5 billion in compensation over shutting down nuclear power plants; Romania could be forced to pay US$4 billion to a mining company because the country’s courts declared a toxic gold mine illegal; and Argentina faced no fewer than 50 investor lawsuits amounting to a total of US$80 billion over emergency measures to get out of its deep economic crisis in 2001.

Now, the UK’s impending exit from the European Union may bring new investment arbitration opportunities. The country has 92 investment agreements in force, which investors from other countries could use to file ISDS claims against the UK. In conferences and alerts for their multinational clients, some of the top investment arbitration law firms are already assessing the prospect of such Brexit claims. Depending on how the Brexit negotiations turn out, these lawsuits could be about anything from foreign carmakers or financial companies losing free access to the EU market, to the government scrapping subsidies for certain sectors. One lawyer from UK-based law firm Volterra Fietta has even suggested that “there may be a number of investors that would have come to the UK expecting to have a certain low wage group of employees”, which might sue for loss of expected profit if they lose access to underpaid, foreign workers.

“Will the banking industry that established themselves in the UK on certain assumptions about access to the EU be able to argue that they invested in the UK with the reasonable and legitimate expectation that they could access the EU market?” Roger Alford, Professor, Notre Dame University and recently appointed to the U.S. Department of Justice

Using the ISDS threat for a business-friendly Brexit

The mere possibility of multi-billion investor claims against the UK could already be having an impact on Brexit negotiations. One of the busiest investment arbitration law firms in the world, UK-based Freshfields – which recently amped its Brexit team by hiring former lobbyist and ex-European Finance Commissioner Jonathan Hill – has warned that given the UK’s existing treaty obligations, “governments will have to consider obligations to foreign investors in implementing large-scale policy changes, such as Brexit”. In other words: the UK government should be careful to avoid Brexit terms that are unfriendly towards business if it doesn’t want to face a host of expensive corporate lawsuits. This sentiment was echoed in a recent debate between private lawyers and legal scholars on whether foreign investors could sue the UK for Brexit, where the moderator noted that “Surely, the UK itself, the government, would be concerned” about such a possibility.

“It could be billions of dollars in claims, honestly.” Arbitration expert

Nobody knows how many ISDS lawsuits the UK might actually face in the context of Brexit. However, judging from previous experience such as the flood of cases against Argentina and expert opinions, the lawsuits could easily amount to hundreds of millions of pounds. British taxpayers would be footing the bill, money which could otherwise be going towards the UK’s public health budget, or safe social housing, for example. Meanwhile, fear of such lawsuits and big payouts could push legislators to prioritise investors’ interests at the expense of the public interest in the creation of post-Brexit laws.

Why stop at suing the UK when you could sue other countries as well? In the context of Brexit, investment arbitration lawyers are also advertising services to corporations which could lead to more investor lawsuits against other EU member states using the UK as a base.

Several law firms have published briefings suggesting that it would be an advantage for corporations if they structured their foreign investment into the remaining EU member states through the UK (see, for example, Crowell & Moring, Baker McKenzie, a lawyer from Fietta, Hogan Lovells, K & L Gates). This means that if you are a German company, for instance, and have an investment in Romania you could let this investment ’flow’ through a subsidiary – possibly only a mailbox company – in the UK. You could then sue Romania via its bilateral investment treaty with the UK – even if no such treaty was in place between Romania and Germany.

Using the UK as a gateway for investor-state lawsuits might be a particularly lucrative strategy for corporations once the bilateral investment treaties (BITs) between other EU member states – intra-EU BITs – are terminated. There are dozens of such treaties in force, most of which have been signed between Western and Eastern European states before the latter became EU members. But the European Commission is trying to dismantle these intra-EU BITs, arguing that they are no longer needed and violate the union’s internal market rules.

This move by the Commission has not been popular with corporations and law firms. That’s because without these treaties in place, an investor from one EU country would no longer be able to bypass European courts and sue other EU countries in private international tribunals. Fried Frank, a US law firm, described the European Commission’s approach as “controversial, as investors in general and some historically capital exporting States are in favour of maintaining the intra-EU BITs”, adding that the EU investment and trade policies are “problematic”.

But via Brexit, law firms are hoping that corporations can maintain the right to sue EU member states. It is in this context that, for example, lawyers from UK- and US-based law firm Hogan Lovells have advised that “investors may wish to consider planning or restructuring their investments in remaining EU Member States… using companies incorporated in the UK in order to maximize the available investment protection.” US-based law firm Baker & McKenzie goes as far as to say that Brexit could provide a “golden opportunity” for the UK to attract foreign corporations.

The re-structuring of investment these law firms are promoting might create more profits for them and their corporate clients. For ordinary citizens of EU countries, however, it means more lawsuits that could force their governments to pay huge sums in compensation from taxpayer money – or the potential abandonment of much needed regulations to protect people and environment, which governments might shelf out of fear of multi-billion investor claims.

Investment lawyers also welcome Brexit as an opportunity to prevent much-needed reforms to the current ISDS system. In particular, they want to continue to be able to appoint investor-friendly arbitrators for the panels who decide ISDS cases. In today’s ISDS system the parties to the dispute – and de facto their lawyers – pick the arbitrators. But this is no longer possible under the EU’s new ISDS system included in its recent trade deals. There, the arbitrators are randomly chosen from a list of arbitrators who are pre-appointed by the EU and its trading partners.

This is only a small improvement on the previous system. Indeed scholars, activists, and even judges have criticised this as “zombie ISDS”, due to the way it continues to give foreign investors greater rights than anyone else and for allowing them to attack health and environmental regulations and claim huge sums of taxpayer money. However, the revised appointment process does partly curb the arbitration industry’s power over the dispute settlement process.

Obviously the industry is not happy with this, and is trying to use Brexit as a way to avoid the reform. US law firm Shearman & Sterling, for example, notes that “the EU investment court would be made up of judges designated by the State parties, instead of arbitrators chosen by the litigating parties”. Other law firms complain that this would allegedly create a “pro-state bias” (US-based Fried Frank law firm), and that it would be “reducing [the dispute resolutions’] attractiveness to investors” (law firm Crowell & Moring).

Crowell & Moring suggests that if the UK government kept the old, even more investor-friendly ISDS system after Brexit, it could use this to “differentiate itself from its fellow EU member states upon departure” in terms of attracting investors. In a similar vein, Shearman and Sterling notes that after Brexit, the UK is free to keep the original ISDS system, and concludes that “the possibility to effectively protect investments through international arbitration could put the UK in a strategic position in the eyes of investors looking to structure their investments in a European jurisdiction”. Baker & McKenzie takes it one step further, suggesting that the EU’s ISDS reforms might “lead to an exodus of outbound investors from the EU to the UK”.

It is no wonder then that the law firms are excited about the opportunity to keep everything the way it’s been so far – and perhaps even get more business running through the UK law firms because of it.

These examples of law firms trying to profit off corporations suing states in the wake of Brexit illustrate how the ISDS-system and today’s trade and investment agreements are fundamentally flawed. They make up a profoundly unjust and undemocratic system where law firms have an incentive to urge corporations to sue states, to the detriment of the citizens.

The ISDS-system could mean that the Brexit negotiations and aftermath could be influenced by fear of legal action from big business, when they should be led in the public interest. This could undermine public health and environmental laws in the UK. Moreover, the ISDS-system gives law firms and corporations the chance to opportunistically pursue ever more absurd cases that enable them to claim taxpayer’s money after Brexit.

Thus both the ISDS system, and its slightly revised version, rebranded as the investment court system (ICS), must be scrapped.

Countries around the world have the power to stop this kind of opportunistic profit-seeking, by no longer entering new trade and investment agreements that allow corporations to sue states. EU member states should refuse to ratify new trade agreements such as the EU-Canada agreement CETA, and resist giving excessive privileges to foreign investors in other trade deals such as the EU-Japan agreement JEFTA, currently being negotiated by the EU.

They should also follow in the footsteps of other states that have refused to enter investment agreements, started terminating them, or excluded the ISDS-mechanism from current and future investment agreements entirely, such as India, South Africa, Indonesia and Ecuador. This is what is needed to shield states from the predatory profit-seeking of law firms and corporations and protect citizens and democracy from corporate attacks.