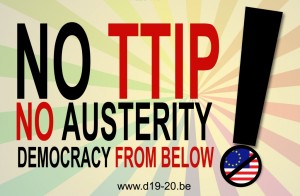 Between 10th-14th March 2014 the latest round of free trade negotiations between the EU and the US take place, discussing the Transatlantic Trade and Investment Partnership (TTIP). TTIP is wrongly being held up as a solution to the ongoing economic crisis, which sees public services being cut to pay for the wreckless financial sector. Even the European Commission’s own research shows an annual 0.05% growth in GDP while job creation from an ambitious deal is negligible.

Instead of benefiting citizens on both sides of the Atlantic TTIP represents an attack on social, environmental and economic standards, driven by big business interests like lobby groups BusinessEurope and the American Chamber of Commerce who are intent on further deregulation and privatisation.

What’s really at stake is far too explosive to be debated publicly, which is why negotiations take place behind closed doors between governments and big business, with citizens relying on leaked documents to reveal shocking plans such as secret arbitration panels that allow corporations to sue governments who get in the way of future profit making; or a new body that allows business to have a strong say in all future regulations, reducing the influence of elected parliaments even more.

We, the citizens of Europe and North America – farmers, trade unions, social movements, activitis, artists, environmentalists, unemployed – reject this EU-US-corporate attack on transatlantic solidarity and call on the European Commission and Trade Commissioner Karel De Gucht to do the same: Listen to the people and say No TTIP, no corporate take-over!

We will be outside DG Trade on Thursday morning calling for Commissioner De Gucht to come outside and hear what citizens – not big business – have to say.