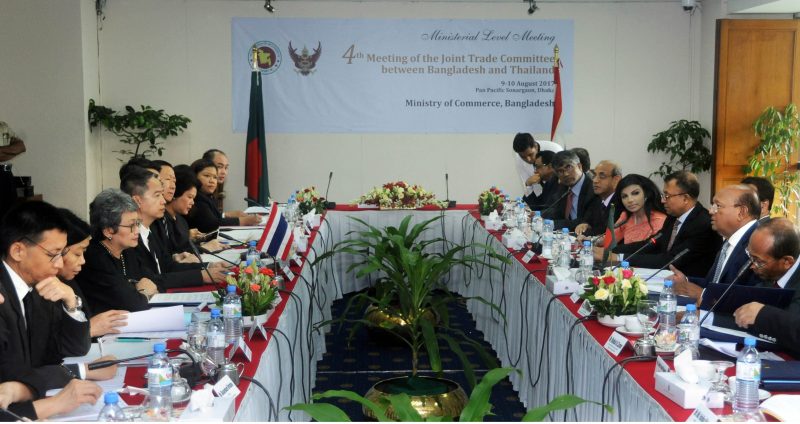 Thailand and Bangladesh will kick off talks to establish a free trade agreement (FTA) during their 5th Joint Trade Committee (JTC) meeting next week.

Rachada Dhanadirek, deputy government spokeswoman, said on Thursday the countries will begin negotiations to reduce trade barriers at the Jan 8-9 meeting in Bangkok.

She spoke shortly after the cabinet approved a Commerce Ministry proposal to host the 5th JTC meeting.

The countries have already conducted a joint feasibility study on the FTA, Ms Rachada added, but declined to give details.

"If the two countries are able to forge an FTA, it will greatly benefit Thailand’s trade and investment because Bangladesh is one of 57 countries that are members of the Organisation of Islamic Cooperation [OIC]," she said. Bangladesh is Thailand’s third-largest trade partner in South Asia, behind India and Pakistan. The cabinet has also approved a Commerce Ministry proposal to sign an FTA with Turkey within this year, Ms Rachada said.

Meanwhile, the cabinet approved a Southern Border Province Administrative Centre proposal for a framework to promote very small power producers (VSPP) in southern provinces. The framework targets generation of 256.9 megawatts in five years with a budget of 19.76 billion baht.

The budget will be drawn from the fiscal budget, the energy conservation fund, the private sector and state-owned enterprises.

Participating will be 100 community power plants generating 1.5-2 megawatts, three plants of up to 10MW and one plant of up to 27MW. Community businesses and private companies can invest in the projects.

Ten percent of profits will go to fund education and training for locals. The government will also promote cultivation of energy crops in southern border provinces, including bamboo, napier grass, acacia coconut and palm.