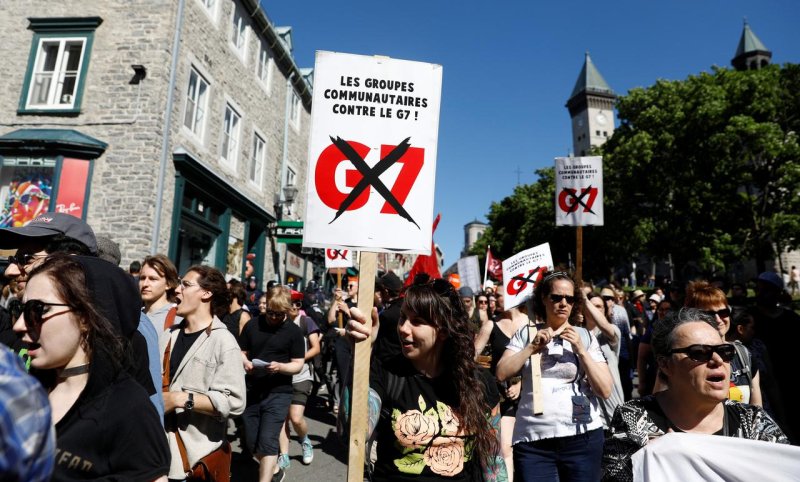 Call for mobilization to defend our alternatives against the G7

For decades, the G7 has played the role of an economic and financial directorate alongside the IMF, the WTO and the World Bank. Today, it is the space where seven of the world’s greatest economic powers and the European Commission come together to perpetuate a system that has led to the growth of inequalities and the destruction of our planet, while allowing the omnipotence and harmful influence of big corporations to continue. Thus, a large proportion of people are denied their rights and every day the promises of the Universal Declaration of Human Rights are violated. The UN’s legitimacy is being questioned from all sides. There is oppression and violence in every corner of the world, while austerity policies lead to a decline in human rights.

While it is shaken by the movement of the yellow vests which denounces – among other things – the growth of inequality, the French government is claiming that tackling inequality will be at the centre of its G7 agenda. But this increase in inequality is due, precisely, to the neo-liberal policies implemented by the richest countries! It seems like the pyromaniacs want to play firemen. If the G7 countries wish to prove us wrong, they will have to really address the structural policies which have been implemented for decades and are at the root of current inequalities.

These G7 summits are organised at great expense ($500 million in 2018) and are but promotional displays. In this context, can the real problems be addressed?

Thus, we the citizens gathered within collectives, movements or organisations, will take the floor to remind us of the urgent need to implement profound and radical changes to our economic and social system, for the rights of each and every one of us, and the dignity of our restored Earth. The fight against inequality, and the urgency of climate and social issues, cannot be met with rhetoric. There’s no time for that. There is an urgent need for rich countries to take responsibility for these challenges.

This G7 will be held in the Basque Country, a land of resistance where there are deeply rooted struggles guided by solidarity and the will to build a fairer and more desirable world. We believe that we can, in the Basque Country as elsewhere, build bright futures and put an end to the intolerable growth of poverty and inequality.

Even though the French government plans to substantially limit the freedoms of movement and of demonstration, we will come together to express the diversity of our aspirations, analyses and alternatives for another world.

For us, the world of tomorrow requires the defence and promotion of human rights which should be the first foundation of any policy. Our proposals concern:

Let’s come together, community organisations, unions and citizens in Biarritz, in August 2019, to make our voices and demands heard.