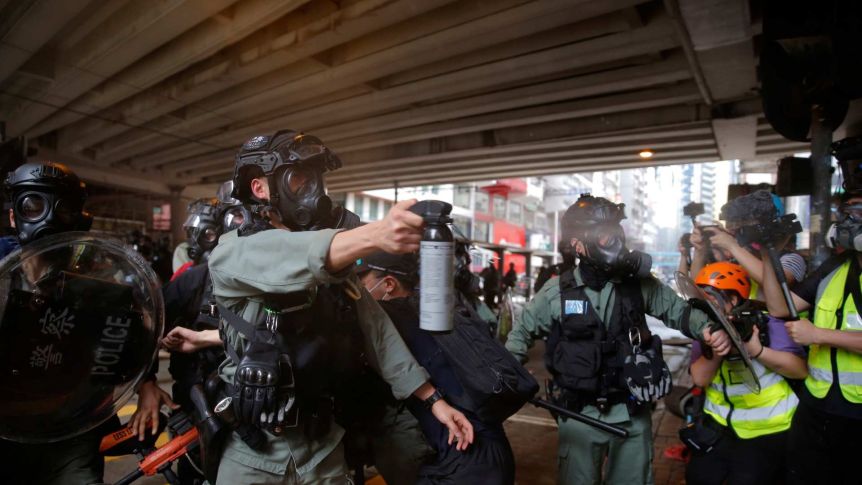 The Federal Government is facing calls to axe its free trade deal with Hong Kong after suspending Australia’s extradition agreement with the city.

When parliament returns, the Greens will try to capitalise on broad anger at the Chinese government’s crackdown on Hong Kong, pressing for a Senate committee inquiry into the free trade agreement.

Greens leader Adam Bandt told the ABC that Beijing seemed intent on stifling dissent in Hong Kong, and Parliament should reconsider whether the free trade deal could still stand.

"If the Government is prepared to say that it is willing to stand up for democracy and human rights in Hong Kong, then that has to be consistent. It can’t be business as usual," Mr Bandt said.

"Even if you agree with free trade agreements in general, it’s time for a rethink about whether entering into a [free trade] agreement with Hong Kong is giving a tacit stamp of approval to the crackdown."

The party believes it has a good chance of gaining crossbench support for a Senate committee inquiry, and also hopes to convince conservative Government Senators to cross the floor in support.

The Government has made it clear it will resist the push, with Trade Minister Simon Birmingham saying the Government had "no plans" to review the free trade deal.

"We continue to monitor developments in Hong Kong so as to act in accordance with Australia’s values and interests."

But that’s unlikely to end parliamentary debate over the Federal Government’s response to recent turmoil in the city.

Beijing’s broad new security law bans "subversion" and "sedition" in Hong Kong, and has drawn condemnation from Australian parliamentarians across the political spectrum.

Last week, Prime Minister Scott Morrison declared the government would suspend its extradition agreement with Hong Kong, as well as permitting thousands of students and graduates from the city to stay longer in Australia.

The Hong Kong free trade agreement only entered into force in January this year and is separate to the free trade deal Australia signed with China in 2015.

Late last year, Senator Birmingham also told the Senate the Hong Kong deal had "completely different terms of agreement" which "[gave] life to respect for the two separate systems that are in operation".

"That’s why we continue to proceed with it," he said at the time.

The government suspended the extradition treaty by invoking the Vienna Convention on the Law of Treaties, arguing the new security law represents a "fundamental change of circumstances" in the city.

That has stirred further debate about the legal implications of the move.

Question marks over other agreements The ABC has been told that not all the agreements Australia has with Hong Kong are impacted by the security and criminal provisions in the new law.

But international law expert Donald Rothwell told the ABC that the Government’s legal rationale put a question mark over a range of other agreements, including ones on drug trafficking and mutual legal assistance.

"The essential legal argument is that the new Hong Kong national security law represents a fundamental change of circumstances to Hong Kong law, and as such can be applied to all of Australia’s Hong Kong treaties," he said.

Professor Rothwell also predicted that Australian police and government agencies might now hesitate before agreeing to co-operate with agencies in Hong Kong.

"I suspect that many Australian government agencies will, in light of the events in Hong Kong of the past year, be now much more cautious in dealing with their Hong Kong counterparts, especially in matters such as law enforcement and mutual legal assistance," he said.