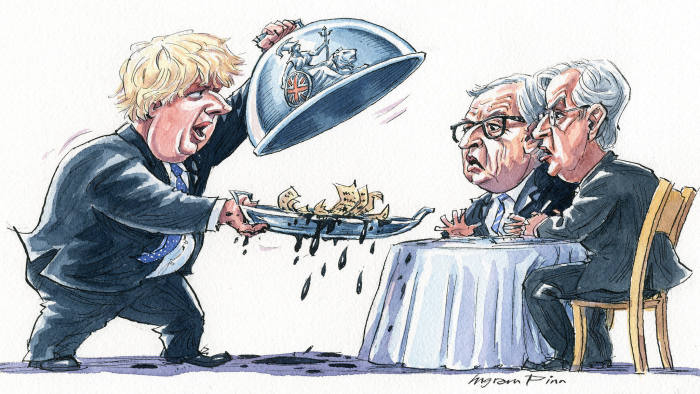 Can Britain reach a trade deal with the EU by the end of 2020?

Britain’s journey beyond a potential exit from the EU will be fraught, complicated and full of political potholes.

Labour wants Brexit sorted, the Liberal Democrats want Brexit stopped and the Conservatives want Brexit done and a free-trade agreement signed by 31 December 2020, the end of the transition period.

Time to negotiate a future trading relationship with the EU has already been reduced from two years to 11 months and few experts believe it is possible to “get Brexit done” in that time, raising the possibility of crashing out on 31 December 2020.

What happens after the election?

After the general election, the first thing on the new PM’s in-tray will be to ratify or, if it is Labour, to renegotiate the Brexit deal.

If it is Boris Johnson, he will have until 31 January to do so, or risk asking for a further extension. Even that deadline is a challenge.

Approval for the Brexit deal comes with the passing of the withdrawal agreement bill (WAB). Theresa May’s version took 11 months to conclude. Johnson argues that much of his deal is in fact based on May’s and therefore it is possible to get it passed in a number of weeks.

Johnson’s director of legislative affairs, Nikki da Costa, has previously said the WAB could take 37 days to get through parliament: 13 days in the Commons, close to 20 in the Lords and four in the so-called “ping pong” stage when final wording is agreed.

Who will lead the talks?

“I think there is going to be a turf war. A lot may also hinge on what happens to DExEU but, in particular, what sort of No 10 Boris Johnson, if he is prime minister, wants to run. The Foreign Office will also want to reassert itself after a few bruising years and the Treasury will want to have a say about what is in [the negotiating objectives] and what’s not,” said Adam Terry, the practice lead on financial services at consultancy Global Counsel.

When do trade talks with the EU and others start and finish?

Talks cannot legally start until the withdrawal agreement is approved. Most are assuming the earliest this could happen is 1 February.

Once the withdrawal agreement is ratified, the UK can open talks with the EU and other countries. However, it cannot implement a deal with a non-EU country until after Britain has left the bloc.

Under the deal struck by May and followed by Johnson, the UK has until the end of December 2020 to conclude its future relationship negotiations. This leaves the government with just 11 months to conclude not just a free-trade deal, but a deal on security and what are known as “cross-cutting” activities, issues that cross many divides such as science, education and international development.

Is this an issue for Johnson?

Yes. He says if he wins the election, he will complete a free-trade deal by 31 December next year — in other words within 11 months.

Few experts say this is attainable.

“There is a very strong argument that it will not be possible to complete everything necessary to leave with a deal – negotiations and sorting the practicalities - in 11 months,” says Joe Owen, the director of the Brexit programme at the Institute for Government.

The UK has an option, agreed under May’s deal, to extend the transition period for one or two years. This would be a one-off request and has to be made by 1 July. The Cabinet Office minister, Michael Gove, has said a Conservative government would not ask for a transition extension.

Catherine Barnard, a professor of EU law at the University of Cambridge, told the Brexit select committee last week that the “average period of time for negotiating a trade agreement is 48 months”, with the additional complication that “never before have you had an agreement diverging rather than converging”.

What are the alternatives?

What is the UK’s mandate for negotiations?

Trade talks conventionally involve both sides drawing up their wish lists, their must-haves and their red lines.

The US has already published its negotiation objectives for a trade deal with the UK after consultation with its trade bodies.

The European commission will get its mandate after the next meeting of EU leaders in December.

The UK, meanwhile, has not yet agreed on its mandate, never mind published its objectives.

What are the issues over the objectives?

The closer the EU and the UK are, the greater the demands by the EU for Britain to maintain standards, or a level playing field, on food, workers’ rights and other key issues. This is aimed at ensuring it does not become a “Singapore-on-Thames”, able to undercut the bloc with a low-tax, cheap labour economy.

The EU’s chief negotiator, Michel Barnier, has already warned that consequences will flow from a WTO-style arrangement, saying the British government would face a “proportional” response if it sought to roll back core social, environmental and consumer standards.

What are the new government’s options?

The next phase of Brexit is characterised as talks on trade. It is not. It is about the entire relationship covering political, cultural and security arrangements.

Owen says one option for the government is to pursue three parallel agreements covering trade and data: security and cross-cutting activities that transect Whitehall and societal divides such as science, education and international development.

Barnard echoes this, noting the reference in Johnson’s Brexit deal is to “agreements plural”.

This raises questions over whether the negotiations could be staggered over time, with a bare bones trade deal covering tariffs struck by the end of 2020, and other outline agreements to progress in other areas in the months and years to come, she says.

The “easiest” deal would be on goods under article 207 of the EU treaty on free-trade deals, which would cover a tariff arrangement on goods alone.

“It is in the interest of the EU to do a trade deal quickly because it has a surplus with the UK,” said Barnard.

If Labour takes power, they will seek a closer alignment with the EU and then put it back to the electorate in a referendum, asking voters to choose between its deal and remain.

This guarantees an extension to the transition period as renegotiation and referendum planning would take an estimated six months.

Yes. Politics is one of three important Brexit threads. The other two being legislation and behind-the-scenes planning in Whitehall.

However, as Owen points out, it will be a mammoth task to get just the arrangements for Northern Ireland – the IT systems, new staff and business readiness – up and running within 11 months.

HMRC will have to start work immediately on putting a new border in the Irish sea with next to no groundwork done in the last three years.

Owen points out that businesses were given 14 months to become familiar with a new HMRC system in 2011, yet the Brexit deal calls for a new system to be designed, developed and implemented successfully within 11 months – a Herculean, if not impossible, task.

A huge legislative programme on laws such as immigration will accompany Brexit raising the potential of parliament being gridlocked again over Brexit.

Is the UK still planning for a no-deal Brexit?

No-deal planning will have to continue until the decision is known on the transition period extension, presenting a challenge for Gove, who may have ambitions for a leading role in negotiations.