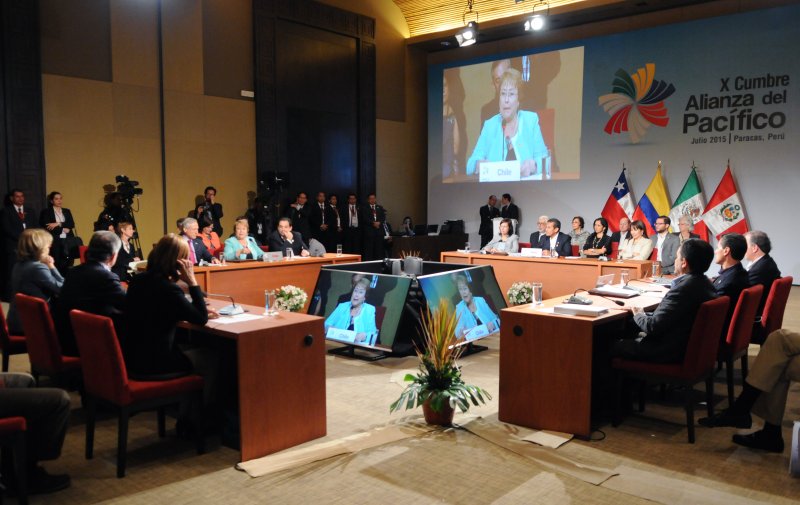 Today in the western Colombian city of Cali, Canada has begun its first round of formal negotiations to forge a free-trade agreement with the Pacific Alliance. The trade bloc, which includes Colombia, Mexico, Chile, and Peru, has become one of the most successful in the hemisphere, and the Canadian government sees increased economic integration as a great step for to grow its trade in the region.

Today’s sit down is the culmination of an invitation extended this summer by the Pacific Alliance to Canada, which has been an observer nation to the alliance since 2012. In addition to Canada, the trade bloc has also invited Australia, New Zealand, and Singapore to become associated members of the Pacific Alliance.

The negotiations begin at a time when economic relations with Canada’s primary trading partners in the hemisphere, through the North American Free Trade Agreement (NAFTA), face their greatest uncertainly since the nations entered their historic alliance in the early 1990s.

Though the rhetoric coming out of the White House is not as hostile toward NAFTA as it was in the early days of the President Donald Trump administration, the three nations are involved in renegotiation talks that could lead to some significant changes to an agreement that the U.S. head of state threatened to abandon altogether in the initial months of 2017.

For Canadian Prime Minister Justin Trudeau and the government in Ottawa, looking to other economic partners serves as both insurance in the event that NAFTA provisions worsen its position in North America and as a part of its ongoing mission to increase exports. In particular, its desire to become an “associated state” of the Pacific Alliance would give the country another arrangement with Mexico, by far its largest trade partner among the four Latin American nations.

François-Philippe Champagne, Canada’s minister of international trade, has previously taken trips to Colombia, as well as Chile and Mexico, in the lead up to the talks and says that he is “very excited by the untapped potential for trade” with the Latin American bloc. Specifically, he cited the “growing middle classes and open, market-driven economies” as sources of optimism for increased interaction.

“We share a goal of greater regional economic integration and freer, more progressive trade that can help create more middle-class jobs and opportunities,” said Champagne. “This new step represents a strategic opportunity for Canada to advance its ambitious progressive and diversified trade agenda with important and like-minded emerging markets.”

In a a statement, the government of Canada also said that “a free-trade agreement with the Pacific Alliance offers the prospect to modernize and streamline our existing bilateral agreements with all four Pacific Alliance countries, expand key aspects of these agreements, as well as include progressive trade elements, such as gender, labour, environment and SMEs.”

In all, Canada’s trade with the four countries within the Pacific Alliance last year amounted to $36.2 billion USD, according to the government in Ottawa. This represented more than three-fourths of the nation’s total trade with Latin America. The bulk comes from the $30.8 billion USD in bilateral trade with Mexico.

For Canada, Colombia represents the smallest partner of the four nations at just $1.2 billion USD in bilateral trade last year. Due to the lower price of oil in recent years, this is actually down from the $1.7 billion USD in trade in 2014, and it marks about half of the $2.4 billion USD in trade Canada did with Peru in 2016. (Chile was right in the middle at $1.8 billion USD.)

But for Colombia and Canada, aligning formally through the Pacific Alliance would build on an integration that deepened when the two nations signed a bilateral free-trade agreement in November 2008, a culmination of roughly six years of discussions that was overseen by then-leaders Colombian President Álvaro Uribe and Canadian Prime Minister Stephen Harper.

This free-trade agreement, which at the time was Canada’s sixth with a nation in the Americas, came into force in August 2011 to reduce or eliminate tariffs on “nearly all of Canada’s current exports to Colombia,” per the government in Ottawa.

While various areas of trade have increased since then, the economic relationship has centered on oil exploration and mining exploration activity. In several instances, the actions of Canadian extraction companies operating in Colombia have come under scrutiny, largely for environmental concerns in rural areas, but the countries have been working to improve both the realtiy and image of these issues.

In June, Champagne visited the country and signed a “Declaration of a Memorandum of Understanding” with Colombian Vice Minister of Mines Carlos Cante Puentes. According to the Canadian government, this aimed to “ensure a more transparent and effective governance of the extractive sector so that the economic opportunities and benefits produced by the sector may be better shared among all segments of society.”