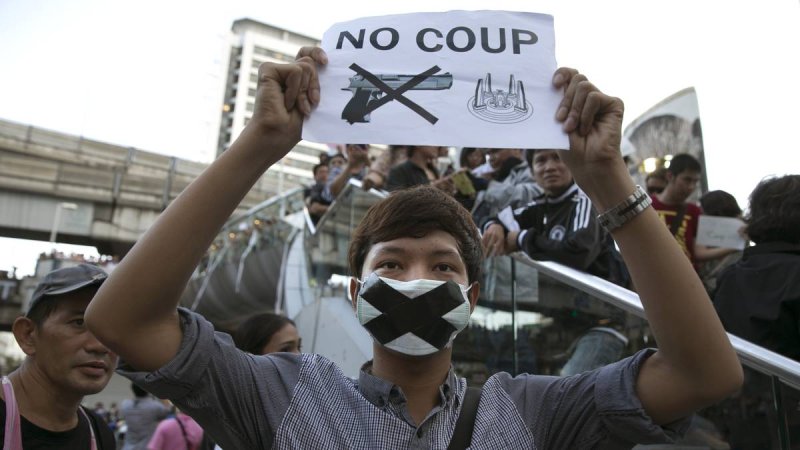 OTTAWA — The Canadian government is exploring the idea of free trade with Thailand despite internal warnings from Foreign Affairs officials that Ottawa should hold back while the Asian country remains under control of a military junta, documents say.

A government memo dated Dec. 12, 2014 and marked “secret” that was obtained by The Globe and Mail shows public servants in Foreign Affairs cautioned the offices of Foreign Affairs Minister John Baird and International Trade Minister Ed Fast to pause this “exploratory process” with Thailand.

The warning comes as the Conservative government has stressed “economic diplomacy,” asking its missions around the world to focus on promoting Canada’s commercial interests and trying to sign trade agreements where possible.

The Foreign Affairs department wrote both ministers in October “recommending against finalization of free trade agreement exploratory discussions or the launch of FTA negotiations in the absence of a democratically elected government,” the document titled “Key Policy & Issue Files” says. An earlier note that went unanswered by the Foreign Affairs Minister’s office advises waiting until “a civilian government is in place.”

In the meantime, department officials recommended in October that “any engagement on free trade agreement exploratory discussions only occur at the working level and on a responsive basis.”

This advice is saying that Canada should not take the initiative on further talks and leave it to departmental staff rather than the minister’s level to respond if approached by Thailand.

The Asian country is currently led by the general in charge of the May, 2014, coup.

But Mr. Fast’s office rejected this advice, the document says.

“On December 5, officials were informed that the office of the Minister of International Trade did not agree with officials’ recommendations and asked that the free trade agreement exploratory process be completed by the summer of 2015.”

The documents says the Department of Foreign Affairs and International Trade is now preparing a memo “setting out potential next steps towards completing the free trade agreement exploratory process” with Thailand.

This move is surprising given that Mr. Baird has publicly condemned the Thai army’s seizure of power. Shortly after the coup, Canada’s Foreign Affairs Minister issued a statement saying he hopes the “Thai military will return Thailand to civilian rule as soon as possible” and “respect democratic processes and the rule of law.”

A spokesman for Mr. Fast on Thursday played down the significance of Canada’s exploratory discussions regarding Thailand when asked to explain why Ottawa is proceeding with them.

He pointed out that Ottawa has yet to decide whether it will begin brokering an actual deal.

“Canada has made no decisions regarding the launch of free trade negotiations with Thailand,” Mr. Moncaster said.

Liberal trade critic Chrystia Freeland said she’s disturbed by the fact the Conservatives seem to be ignoring the recommendations of officials and exploring a deeper relationship with a country that used to have a democratically elected government but is now under the control of the military.

“Publicly we’ve seen Mr. Baird come out and quite rightly be very critical of the military coup in Thailand so it’s concerning that given that strong public position, and in the face of expert advice to the contrary, we would be still pro-actively moving forward,” Ms. Freeland said.

Canada is currently engaged in 11 separate sets of international trade agreement negotiations and is holding exploratory discussions on a trade deal in three cases – with Turkey, the South American Mercosur trade bloc and with Thailand.