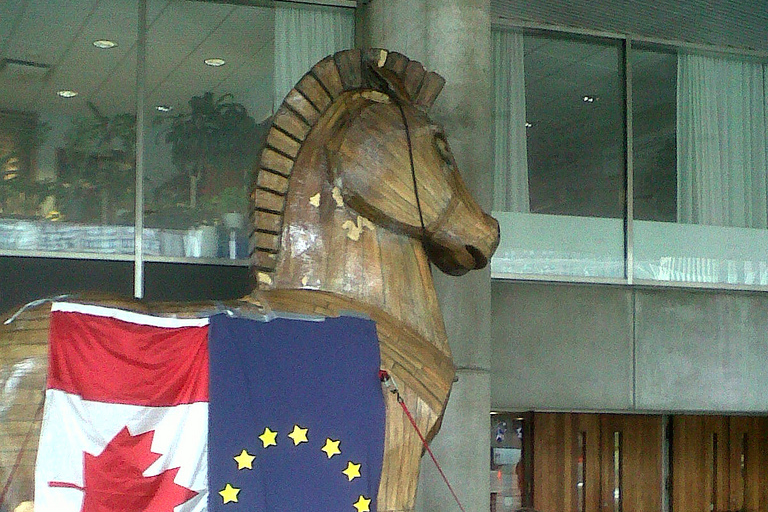 Canada-EU trade deal: Costs for new drugs may rise, but not for years

Are the benefits of Canada’s free trade agreement with Europe worth what it costs? New Democrat Tracey Ramsey is trying to do the math.

In questioning witnesses from the generic pharmaceutical industry at the Commons international trade committee Tuesday, Ramsey compared two figures that seemed to cancel each other out.

The amount Canada’s economy could benefit if all the tariffs on EU imports into Canada were eliminated was pegged in 2008 at about $850 million annually.

That’s at least how much another study projects the cost of drugs in Canada could rise, thanks to the deal.

"All Canadians will lose," the MP said, once C-30, Canada’s implementation legislation for the Comprehensive Economic and Trade Agreement (CETA), extends pharmaceutical patents by up to two years, delaying the arrival of cheaper generic alternatives.

"Canada would have never done this on its own. This was done as a concession to help get the agreement concluded," Jim Keon, the president of the Canadian Generic Pharmaceutical Association, told CBC News earlier.

Many pharmaceutical companies have headquarters in Europe. "The benefit of extra revenue goes to [EU] companies, so they pushed for it," he said.

Now that CETA’s signed, it might be provisionally applied sometime next year.

"We’re finding it very difficult to conduct that kind of analysis," Canada’s chief negotiator Steve Verheul told the committee Nov. 15. The changes won’t kick in for "eight years or so."

Roughly one-quarter of the clauses in the bill that brings Canada into compliance is about pharmaceutical patent term restoration: extending patent lengths to recover time lost during the regulatory approval process.

Canada is the only G7 country that hasn’t had such extension powers, until now.

The only known government cost estimate, obtained by The Canadian Press during negotiations in 2012, put the potential annual price tag between $795 million and $1.95 billion.

The figures Ramsey cited were based on work published in 2013 and 2014 by researchers from York University and the University of Ottawa that estimated drug costs would rise between 6.2 and 12.9 per cent annually.

Author Joel Lexchin told the trade committee last spring that translates into $2 billion to $3 billion in higher drug costs by 2023.

But a worst-case scenario considered in some early cost estimates didn’t come to pass: CETA did not extend patents by up to five years to match Europe’s system.

Since every additional year delays cheaper generic alternatives — priced at perhaps 20 per cent of the brand-name drug’s price — two years is a less costly outcome for consumers.

If the government keeps its commitment not to make these changes retroactive, only new drugs would have longer patents. And they can take years to reach the market.

In an email to CBC News, Health Canada confirmed CETA will not have any material impact until about the mid-2020s.

Without knowing what new drugs are on the horizon, the scope of the rising costs is hard to predict.

Will savings from expiring patents on popular drugs offset the arrival of more expensive drugs with longer patents? Will future drugs cost about the same as current ones?

"Who today can predict what products will be approved going forward?" Keon said.

CETA’s not all bad news for generics.

The manufacturers Keon represents can export new drugs to countries where a patent has expired before Canada’s two-year extension is up.

The process for enforcing patents as new drugs are approved may be simpler and more efficient in the future.

Brand-name pharmaceutical companies will also get a right of appeal they didn’t previously have.

If these changes — which Keon called the most extensive the industry has experienced in 20 years — speed up processing and lower legal and administrative costs, some prices may drop.

But the full details on this won’t be known until cabinet-approved regulatory changes are published, possibly soon.

Generics have helped drive down the cost of provincial and federal drug plans.

Health Minister Jane Philpott said last spring she wasn’t "in the business of off-loading expenses to the provinces and territories that are not appropriate."

Does that mean compensation is coming? Philpott said last week the cost of CETA would be discussed "at the appropriate time."

"I have a mandate commitment to address the rising costs of pharmaceuticals in this country," she said, adding Canada’s on track to save a billion dollars a year through bulk purchasing programs.

The Patented Medicine Prices Review Board is consulting on how to control excessive prices.

"You can’t consider [intellectual property] measures in a vacuum, excluding all other policy tools available to governments," said Declan Hamill, a vice-president with Innovative Medicines Canada, which represents brand-name drug manufacturers in Canada.

"If the thesis that IP improvements drove drug prices was true, then you would expect people in jurisdictions like the European Union and Japan to pay more," he said, because they have longer patent protection.

The opposite is true: Canadians pay the second highest drug costs in the world, behind only the U.S.

Under CETA, drug costs may be higher a decade from now. But budgeting for something this unpredictable will be complicated.