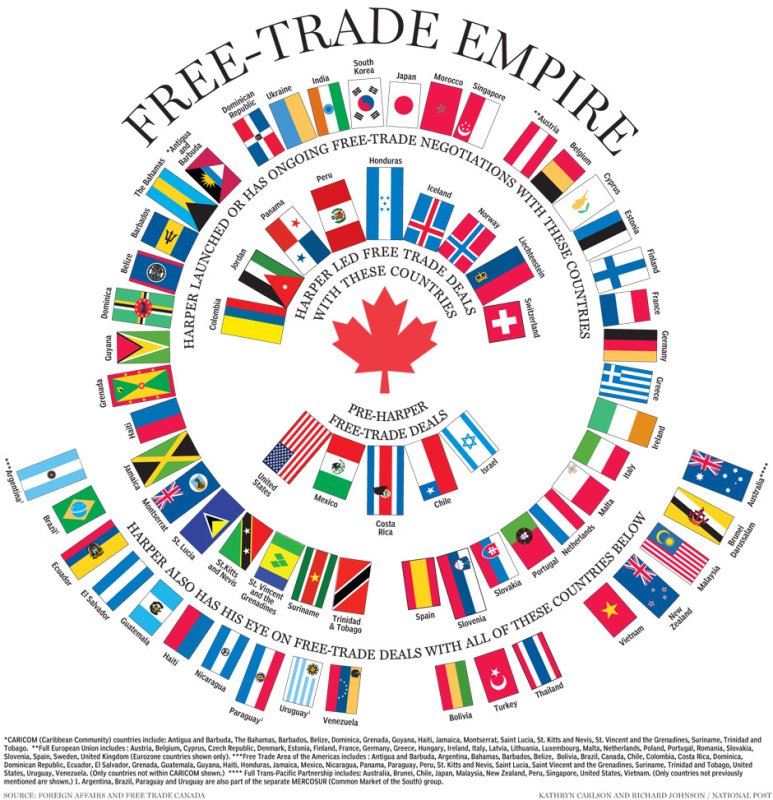 Much-ballyhooed agreements with 11 Asia-Pacific countries and with Europe have yet to be ratified, with no crowing to be heard

OTTAWA – The Harper government’s vaunted free trade agenda is either a roaring success or hopelessly stalled — and given that government officials aren’t commenting, even experts in the field are having trouble deciding which.

Next week, the government would have reason to trumpet its free trade achievements when hundreds of negotiators from 11 Asia-Pacific countries descend on Ottawa as part of the Trans-Pacific Partnership (TPP) talks, viewed as the next big deal after the European pact known as CETA.

But Ottawa is barely acknowledging the event is even happening; so much so that the Council of Canadians issued a release Friday wondering why the government is “setting (a) new global standard” for secrecy.

There may be good reason for the underwhelming embrace of TPP.

With more than 20 negotiating rounds to date, it’s beginning to appear that the countries vying to create one of the world’s biggest trading blocks are just going through the motions.

“Everyone is indulging in a charade where negotiations are going forward. It’s the biggest game in town, but I’m not convinced TPP will see the light of day,” says Lawrence Herman, a Toronto-based trade lawyer formerly with Cassels Brock.

The situation is not much more clear with Canada’s agreement-in-principle reached with Europe last October. Officials say CETA is taking longer than anticipated to render into legal text, but observers believe the deal has run into substantive roadblocks.

Also perplexing is why Canada has not ratified the foreign investment protection agreement with China, called FIPA, when the two sides signed the treaty almost two years ago.

The one agreement that appears to have staying power is the free trade deal with South Korea, although that rates low in terms of significance next to the Canada-European Union pact, or even TPP.

Trade agreements aren’t usually big vote-getters for governments, but the consequences for the Harper government of failure on CETA — or having to announce further concessions to the hard-bargaining Europeans — could be a serious issue entering an election year.

The federal government has made free trade deals a central plank of its economic agenda, and Prime Minister Stephen Harper all but declared “mission accomplished” for CETA at a ceremony in Brussels last October.

“The Conservatives have made this such a high-level issue for them that, if they can’t close these deals, they will have problems and it’s not just closing deals, it’s closing good deals,” said NDP trade critic Don Davies.

“But I think their rhetoric has never matched the reality.”

Matthew Kronby, a former Canadian trade negotiator who is now a partner with the Bennett Jones law firm in Toronto, says there are still issues to be worked out before CETA can be completed.

“It’s very close, but getting over that last hump is a challenge right now,” he said.

One key issue, sources say, involves the controversial investor-state clause that allows private firms to sue governments if they feel they have been unfairly thwarted in their operations.

Several European countries, including Germany, are said to be balking at signing because they fear they will have to offer the same arrangement to U.S. companies, which are notoriously more litigious than those in Canada. As well, the Europeans are concerned U.S. firms would be able to piggy-back on CETA to sue in Europe through their Canadian subsidiaries.

Trade consultant and former negotiator Peter Clark says the difficulties show that Canada never really had an agreement with Europe and the haggling continues on several fronts.

If the Europeans are getting cold feet over CETA, Davies says he has been told it is Ottawa that is having second thoughts about the investment protection treaty with China.

Reports of a cabinet rift over the agreement have surfaced, although a senior government official told The Canadian Press that concerns about labour mobility issues were alleviated somewhat last week by Ottawa’s overhaul of the temporary foreign workers’ program.

A substantive problem, says Davies, concerns the non-conforming measures clause grandfathered into the FIPA that would allow China to frustrate Canadian firms seeking to invest in the world’s second-largest economy. Canada has the Investment Canada Act and a few other well-known restrictions, but barriers are far more numerous and, perhaps, more mysterious in China.

“There could be thousands,” said Davies. “I asked for a list in committee and they (government officials) couldn’t provide them.”

But perhaps the most problematic is the talks surrounding TPP, which seek to create a trading block among 12 countries on both sides of the Pacific representing 40 per cent of the world’s economic output and 26 per cent of global trade.

U.S. President Barack Obama has set his sights on the Asia-Pacific summit in November for arriving at an agreement-in-principle, although Australia’s trade minister said recently the first half of 2015 is more realistic.

Even that deadline may be too optimistic, say analysts, given that Obama has not secured fast-track authority to negotiate a deal from the Republican-controlled House of Representatives, or even the Senate. The prospects that the mid-term elections in November will return a more friendly Congress appear slim, they note.

Fast-track authority gives the White House the green light to negotiate an agreement and send it to Congress for an up or down vote but, without it, any deal struck with the U.S. can be picked apart later by special interests in Congress.

“If I was negotiating I’d be quite skeptical about what can be delivered,” explained Kronby. “You make concessions and you make a deal and the U.S. comes back a year or two later and says it’s not good enough.”