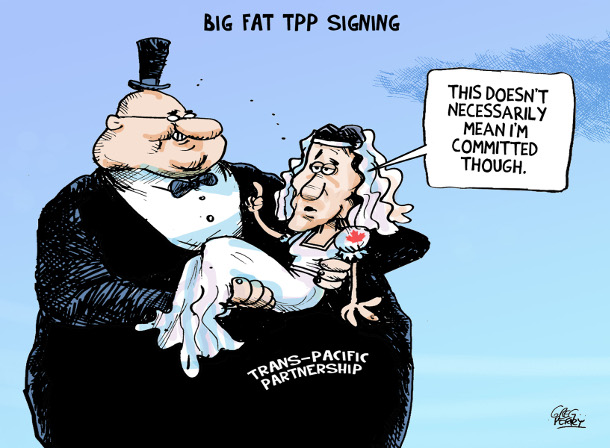 Canada seeks input on new members for the CPTPP agreement

The Government of Canada has invited members of the public to submit views on the potential admission of additional members to the Comprehensive and Progressive Agreement for Trans-Pacific Partnership, an international trade agreement otherwise known as the CPTPP. Countries or customs territories that wish to join the CPTPP must submit a written request to the existing member countries.

Although no formal requests to join have been received to date, South Korea, Taiwan, Thailand and the United Kingdom have announced their interest in acceding. The Canadian Government anticipates that accession negotiations with one or more of these countries could begin as early as fall 2019.

In anticipation of these negotiations, the Government has invited interested members of the Canadian public and business community to provide written submissions to Global Affairs Canada by August 25, 2019.

What is the CPTPP?

The CPTPP is a free trade agreement (FTA) between Canada, Japan, Australia, Mexico, New Zealand, Chile, Peru, Vietnam, Malaysia, Singapore and Brunei. Originally negotiated as the "TPP" and renamed after the United States dropped out in 2017, the agreement came into force for Canada, Japan, Australia, Mexico, New Zealand and Singapore at the end of 2018 and for Vietnam in January 2019. It will come into force for the remaining members once they have completed their domestic ratification procedures.

What Type of Trade is Covered in the CPTPP?

The CPTPP is a broad-ranging agreement that includes the full panoply of provisions often found in FTAs, as well as additional commitments and disciplines in new areas. In addition to providing for tariff elimination across a number of sectors (including notably agriculture, fish and seafood, forest products, industrial goods and consumer products), the CPTPP includes chapters on textile and apparel goods, services (including financial services), investment, intellectual property protection, anti-dumping, subsidies and safeguards, competition policy, electronic commerce, customs and border procedures, labour rights and obligations, environmental governance, sanitary measures for the protection of human health, technical barriers such as standards and conformity assessment measures, small- and medium-sized enterprises, and state-owned enterprises. Dispute settlement provisions, including for investor-State disputes, are also included.

What Impact Could the Admission of South Korea, Taiwan, Thailand or the United Kingdom to the CPTPP Have on Canada?

The CPTPP already covers about 13 percent of global GDP with its current members, representing a collective market of 503 million people. With the admission of all four identified candidate countries, these numbers would climb to nearly 20 percent of GDP and 714 million people. Although Canada has had an FTA in place with South Korea since 2015, the CPTPP includes more extensive provisions in certain areas such as electronic commerce, and includes disciplines on transparency, state-owned enterprises and corruption. Moreover, the labour and environment chapters of the CPTPP are fully enforceable under the agreement’s dispute settlement mechanism, which is not the case under the Canada-Korea FTA.

Canada currently has an FTA with the United Kingdom through the Comprehensive Economic and Trade Agreement (CETA) with the European Union, but the UK would cease to be a party to this agreement after Brexit. Canada does not currently have FTAs with either Thailand or Taiwan, both of which are important trading partners. Admission of these countries to the CPTPP could therefore be a useful mechanism to fast-track free trade negotiations with these partners.

What Are the Topics of Interest in the Consultation?

The Government of Canada has requested input on the following topics in particular:

Why Is It Important to Have Your Say?

The CPTPP is a broad-ranging free trade agreement with potentially significant impacts on Canadian businesses. Many such impacts could be positive. For example, the agreement creates opportunities for Canadian export and service businesses to enter new markets. The agreement also streamlines and standardizes customs procedures in certain countries, which should bring much-needed efficiencies in trading relationships and offers protections for foreign investors to foster growth.

However, free trade agreements can also create negative consequences, such as exposing sensitive industries or sectors to foreign competition. It is therefore important that the Government of Canada be aware of all potential implications of expanding the membership of the CPTPP before it enters into negotiations. Who Should Consider Providing Comments?