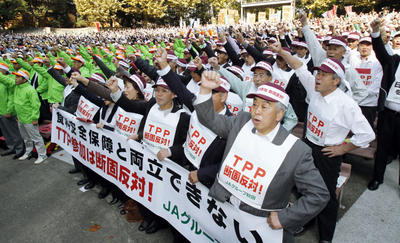 OTTAWA — The Harper government is eyeing a new Asia-Pacific economic block — the Trans-Pacific Partnership — and may be willing to negotiate aspects of Canada’s supply management system for certain farm products in order to get in.

Trade Minister Peter Van Loan says he met with most members of the fledging alliance in Japan last week, and Canadian officials have sat in on some meetings as observers.

No decision has been made about whether Canada will formally request to join the club, but Canada’s politically-sensitive supply management of eggs, dairy and poultry is regarded a poison pill for current members, particularly the United States.

Van Loan said Canada has indicated its interest in the grouping, and is in the process of assessing whether it will seek to join and if it would be welcomed.

He agreed the country’s management schemes for farm produce, which include quotas and high tariffs that protect farmers from foreign competition, may be put up as a bargaining chip.

"It’s quite normal and natural for each country to have sensitivities, but we agreed in the European Union talks that all issues are on the table and if we were to enter into the TPP, it could be on the same basis," the minister said in a telephone interview from New Delhi, where he was formally announcing resumption of trade talks with India.

But Van Loan made clear that Canada is not prepared to simply abandon it’s agricultural management schemes as a pre-condition for membership.

"Certainly we would not engage in a process of unilateral disarmament. We would deal with these issues on the negotiation table," he said.

When Canada was initially asked to join the talks, it declined because of its reluctance to put the management regimes that benefit Ontario and Quebec farmers up for negotiation.

But that was at a time when the TPP was considered small potatoes, with only minor economic powers in the grouping.

Now that the United States has joined, and Japan is lining up to participate, Canada is concerned it will be left out of what is emerging as perhaps the major driver of free trade in the increasingly important region.

A recent paper on Canada’s trading relations said the TPP offers Canada a rare opportunity not only to deepen its economic relationship with the United Sates, but also to expand its export markets.

"The TPP offers at least two strategic opportunities," wrote international economics experts Wendy Dobson and Diana Kuzmanovic in a paper for the School of Public Policy at the University of Calgary.

"A comprehensive negotiation in which Canada, the United States and Mexico could upgrade NAFTA, and a way to diversify and deepen trade and investment liberalization with major economies in the Asia-Pacific region."

The authors acknowledge that Canada may need to move toward lower quotas and tariffs in eggs, dairy and poultry, but that it may have no choice.

"Such moves risk some domestic political turbulence," the say. "But the case for change has been made. Can Canadians afford not to try."

Van Loan said even if Canada does not join the TPP, it will benefit from freer trade simply by already having trade agreements with three regional players — the U.S., Chile and Peru.

In a related matter, the minister said Canada’s economy could grow by between $6 billion and $15 billion annually if it concludes a successful comprehensive trade deal with India, the world’s second most populous country.