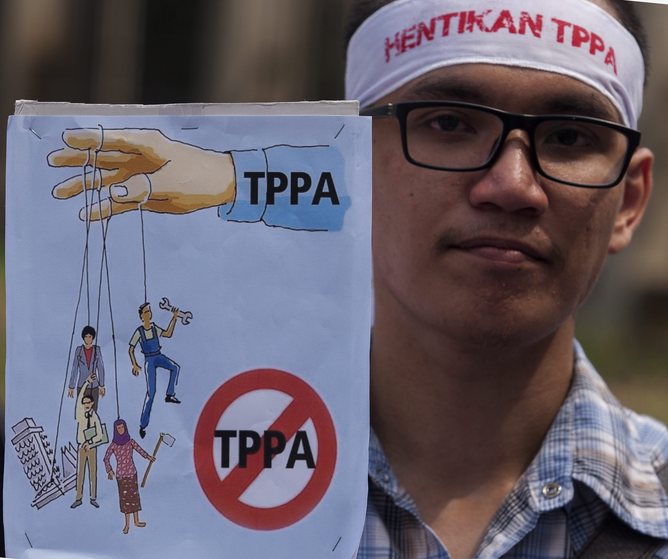 CAP calls on govt to withdraw from TPPA negotiation

THE Consumers’ Association of Penang (CAP) remains seriously concerned that Malaysia continues to negotiate the Trans-Pacific Partnership Agreement (TPPA) with 11 other countries including the United States. Hence CAP has sent a letter to the Prime Minister of Malaysia and submitted copies to all ministers urging the government to withdraw from the whole negotiation and not sign the TPPA. Below is our letter to Datuk Seri Najib Razak and Cabinet ministers.

Withdraw from the Trans-Pacific Partnership Agreement

We remain seriously concerned that Malaysia continues to negotiate the Trans-Pacific Partnership Agreement (TPPA) with 11 other countries including the United States.

TPPA leaders held a meeting on the sidelines of the Asia Pacific Economic Cooperation (APEC) summit in China on Nov 10, 2014. According to news reports it was held in the US Embassy in Beijing, was chaired by President Obama and lasted for one hour. Afterwards, YAB Datuk Seri was quoted as saying that all 12 countries involved in the TPPA have agreed that the final round of negotiations will be held early next year. The TPPA negotiations, therefore, appear to be entering the final stage.

There are conflicting reports as to what was agreed on the TPPA in Beijing. The New Zealand Trade Minister Tim Groser in a Wall Street Journal interview after the TPPA leaders met stated that the TPPA countries recently reached informal deals on intellectual property and rules of origin, so that of the two dozen or so chapters governing rules, negotiators have informally “closed out” all but two major areas: state-owned enterprises and investor to state dispute settlement.

Yet earlier that day, when the TPPA trade ministers reported to the leaders, chapters such as intellectual property, environment, rules of origin, trade facilitation and customs, electronic commerce, labour and supply chains had not yet been concluded and Japanese press are reporting that negotiations will continue in December 2014 on several contentious areas, including intellectual property, state-owned enterprises and the environment.

In 2013, YAB Datuk Seri had identified a number of these issues as areas of great concern stating that “As you go beyond that, into areas of intellectual property, investor-state dispute settlement, government procurement, state-owned enterprises, environment and labour, you impinge on fundamentally the sovereign right of the country to make regulation and policy”. The main area Malaysia is supposed to benefit from the TPPA is in tariff-free exports to TPPA countries and since tariff-free market access for all Malaysia’s goods with no yarn forward rule has not yet been agreed, it is not the time for Malaysia to be making concessions in any of these sensitive areas.

Even in this area where Malaysia is supposed to benefit — goods market access — a study by a senior economist from the United Nations Conference on Trade and Development (UNCTAD) using 2013 data found that Malaysia’s balance of trade with TPPA countries will worsen by US$1.4 billion per year (as imports increase by more than exports) due to the TPPA. The study showed that even in the goods chapter which is supposed to benefit Malaysia (removing tariffs on Malaysian exports), Malaysia will be worse off than without the TPPA. This damning analysis demonstrates that there are essentially no benefits to offset the acknowledged costs of the many other TPPA chapters (including stronger intellectual property which will keep medicine and textbook prices higher for longer, opening of Malaysia’s purchasing by the government and government-linked companies to products, services and suppliers from other TPPA countries, restrictions on Malaysia’s ability to regulate — such as to impose capital controls, do tobacco control or environmental regulation — due to the investment chapter, etc.).

Furthermore, the USA does not have fast track authority. Without fast track authority, one committee chair or a small group of senators in the US Congress can reopen the signed text to reduce the USA’s obligations or increase Malaysia’s obligations, for example, they could remove previously-agreed exceptions for Bumiputras to opening Malaysia’s government procurement to products, services and suppliers from other TPPA countries, etc. Other TPPA countries such as Canada have said that they will not conclude the TPPA negotiations without fast track authority because otherwise the US Congress could unravel the careful balance in the TPPA text. The European Union has the same position for its free trade agreement negotiations with the USA. We trust that Malaysia has taken the sensible position to protect our national interest and insisted on the USA having fast track authority before it makes any concessions on the sensitive issues outlined by YAB Datuk Seri above.

Given these conflicting signals, and in the interest of transparency and accountability, we call on the Malaysian government to publicly disclose what it has agreed to so far in the TPPA.

Despite YAB Datuk Seri’s stated concerns, we know that according to the leaked TPPA investment chapter in 2012, Malaysia had already agreed to the principle of investor to state dispute settlement (ISDS). This is particularly shocking in light of recent developments that show up the deep flaws in the system, which privileges investors’ interests often at the expense of public interest, including:

A US$50 billion ISDS award to a foreign investor in July 2014 which shows how much governments can be liable for in one dispute under these types of provisions since the leaked TPPA investment chapter had no cap on damages that the Malaysian government may have to pay a foreign investor.

Germany refusing to allow the Canada-European Union Trade Agreement (CETA) to be signed because it has ISDS in it and it is concerned that Canadian companies could use it to challenge German regulations.

A Canadian academic study which shows that in all publicly available ISDS cases to 2010, US investors have a 98% chance of a broad interpretation of their rights.

Indonesia discontinuing all its bilateral investment treaties (which have similar provisions to those which Malaysia has agreed to in the leaked TPPA investment chapter) after being sued by a foreign investor using these kinds of provisions.

Concerns about ISDS expressed by the chief justice of Australia’s highest court and Singapore’s Attorney General.

Furthermore, based on the experience of other countries, both developed and developing, the certification process being insisted on by the United States after the TPPA is signed, if agreed to, would mean that:

In doing so, it could:

These demands for extra obligations on Malaysia could come from the Office of the US Trade Representative, the US Congress or even a US company such as Chevron.

Other US requirements in the TPPA, such as restricting Malaysia’s current successful use of export taxes so that instead it just exports raw materials to the US and then re-imports the finished products such as steel products, impeding our ability to move up the value chain and suppressing our development potential, and processes such as certification which turn the Malaysian Parliament into a rubber stamp, make it clear that the TPPA is in fact a recolonisation of our country.

The TPPA is worse than the proposed Malaysia-USFTA in its:

proposed stronger disciplines on government assistance to government-linked companies (GLCs) in the state-owned enterprise section of the competition chapter,

proposed longer monopolies on medicines in the intellectual property chapter,

proposed interference in government subsidies of medicine so that the government has to pay more (in addition to the high prices for longer due to the intellectual property chapter) via the transparency chapter annex,

likely restrictions on the Malaysian government setting a maximum royalty that Malaysian companies have to pay to foreign investors for using technology via a voluntary licence in the investment chapter, with the ensuing increased costs of production that would affect local companies such as Proton and Malaysia’s generic medicine manufacturers,

proposed increased threats to privacy via the electronic commerce chapter.

These serious costs are not outweighed by increased tariff-free markets for Malaysian exports, as the UNCTAD study above shows that Malaysia’s goods trade balance will still worsen under the TPPA. The Malaysian Cabinet decided not to sign the Malaysia-USFTA in 2007 as there were reportedly 58 areas of disagreement. Since the TPPA is worse than the Malaysia-USFTA and will not even have benefits from the goods chapter, and Malaysia still needs to be able to: provide affirmative action for Bumiputras in purchasing by the Malaysian government and Malaysian GLCs, use capital controls in the event of a financial crisis and have affordable medicines for patients, and so on, we fail to understand why it is suddenly okay for Malaysia to agree to the TPPA.

We have repeatedly warned that the TPPA is a bad agreement for Malaysia. However, instead of Malaysia withdrawing from these TPPA negotiations, it appears that it is capitulating.

We reiterate our call for Malaysia to immediately withdraw from the TPPA negotiations. If it does not do so, since YAB Datuk Seri has said that Malaysia’s commitment in the TPPA must be endorsed by the Dewan Rakyat, for this to be meaningful:

The full TPPA text must be made public with time for detailed analysis before Malaysia signs it;

A full and informed debate must be held in the Malaysian Parliament; and

Should there be a vote, Malaysian parliamentarians must be given a free conscience vote on the TPPA that is not dictated by party lines.

We hope that our concerns raised above are seriously considered. However, due to the potential adverse impacts of the TPPA, the Malaysian government must withdraw from the whole negotiation and not sign the TPPA.