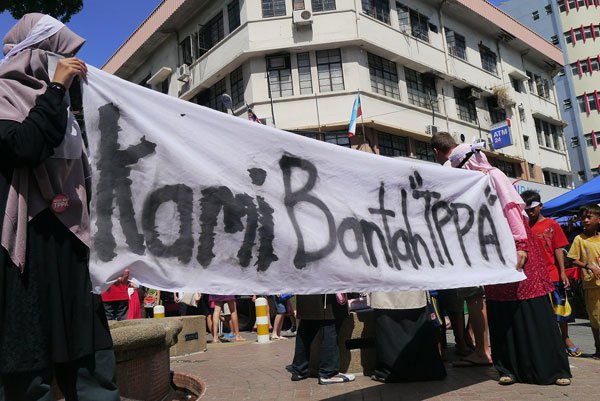 The Consumers’ Association of Penang (CAP) is shocked that the Government is making a mockery of Parliament by seeking a blank cheque for the country to be tied to the controversial Trans Pacific Partnership Agreement (TPPA).

In its resolution before Parliament the Government wants a mandate to sign AND ratify the TPPA. Signing before a full understanding of the implications of the host of new obligations and commitments is bad enough, but to ask Parliament to agree to ratification that is a legally binding step at this stage is tantamount to the Government admitting it will disregard growing consternation from many Malaysians.

The first day of the debate in Dewan Rakyat saw several opposition members of parliament raising many issues of concern that CAP has alerted the government to over the past four years. Initial analysis of the more than 6,300 pages of text by a range of experts including several from the United Nations, academia and NGOs has confirmed all of CAP’s concerns.

Of the 30 TPPA chapters, 24 are targeted at national policies and laws that will change the structure of our national economy and even society. The full implications of what that means are not properly understood yet.

When Minister of International Trade and Industry YB Dato’ Sri Mustapa Mohamed displayed items from pants to a car part in his speech to Parliament yesterday to show the expected increase in exports from the TPPA, he also admitted that the government-commissioned

PricewaterhouseCoopers (PwC) Malaysia report shows that Malaysia’s overall trade balance will worsen due to the TPPA because of even more imports compared to exports. Thus even the MITI Minister admits there are no gains from the trade chapters where Malaysia was supposed to benefit, so there are no benefitsto outweigh the costs to Malaysia from the 24 non-trade chapters.

Besides this, Bank Negara Malaysia Governor Tan Sri Dr Zeti Akhtar Aziz had said that Malaysia has been driven by domestic demand for more than a decade and no longer an export-led economy. Hence CAP views that there is no compelling reason and justification for this TPPA deal, which is also not all about trade.

It is no comfort to consumers to have some cheaper imports when the TPPA over time will result in job losses. A recent United Nations study warns that the TPPA would lead to employment losses in all the 12 TPPA countries, totaling 771,000 lost jobs in a 10-year change (2015 to 2025).

CAP therefore strongly calls on our MPs to reject the signing and ratification of the TPPA. If a vote of conscience is not permitted to the MPs, then it is on their conscience that future generations of Malaysians will bear the burden and ultimate cost of this unconscionable “free trade agreement”.