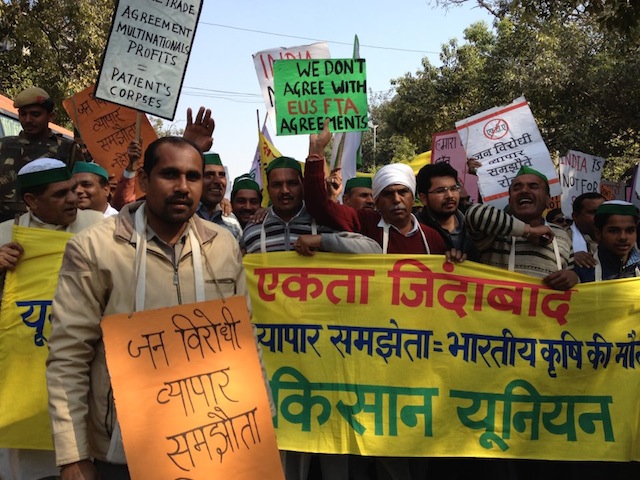 Just like the SEZs, we need to review whether the FTAs, including agreements with regional blocs, have delivered on their promise.

Column: Careful on those FTAs

The government will soon unveil its annual Foreign Trade Policy (FTP). This comes after the passage of the Union Budget. It typically contains measures to boost exports and reduce transaction costs. It cannot explicitly overturn import or export duties passed in the Budget, but it may include incentive schemes which have an impact on the exchequer.

In the last two years, the growth in global trade has been muted, and India itself has underachieved its export targets. So, there is much interest in the content of the FTP.

Two recent pronouncements from the government are relevant pointers to the upcoming FTP. The first was by the Prime Minister, while laying the foundation stone for a port-based Special Economic Zone (SEZ). The PM said that we must join manufacturers to export promotion, thereby indicating that exports can become a major driver. He is determined to remove all obstacles to SEZ development. The original idea of SEZ was essentially to create jobs in export-oriented manufacturing. But the SEZs have not delivered fully on their promise, and subsequent tax changes have clouded their prospects. Prime Minister Narendra Modi, in his Independence Day speech, called for a “make in India” movement, inviting investors to use India as a global manufacturing hub. Nothing protectionist about this, since he said the manufacturing should be of global quality, with “zero defects”.

The second recent pronouncement relevant to our trade policy came from the commerce minister, who said that we need to comprehensively review all our free trade agreements (FTA). Just like the SEZs, we need to review whether the FTAs, including agreements with regional blocs, have delivered on their promise. India currently has 14 agreements in force, including an FTA with the ASEAN bloc of 10 countries. It is in the middle of negotiating dozens of new FTAs or regional trade agreements. The new approach, starting with Singapore, is to sign a comprehensive agreement which encompasses trade and investment, both in goods and services. Later this month, there will be a ministerial round of meetings as part of the Regional Comprehensive Economic Partnership discussions. RCEP is called ASEAN + 6, and is essentially a vastly upgraded free trade arrangement that includes Korea, Japan, Australia, New Zealand, China and India. All of these six already have a functioning FTA with the ASEAN bloc.

As we review our FTAs and prepare a negotiating stance for RCEP, it is useful to keep in mind the following. First, is this providing a zero-duty route for Chinese goods? India already has a deeply asymmetric trade deficit with China. It also has slapped anti-dumping duties on a variety of Chinese products. The last thing we need is an unfair zero-duty Chinese entry. Since China has an FTA with ASEAN, and so does India, it is easy for Chinese goods to slip in via ASEAN countries, especially if the rules of origin are not enforced strictly. The second factor is that of inverted duties. The FTA mandates zero-duty on finished goods that enter India. But Indian manufacturers often have to source intermediate goods, or raw materials from third-party non-FTA countries. Hence, finished goods imports from FTA partners have an unfair advantage. The case of information technology goods (under the IT Agreement) is the most well known, but this disability applies across different sectors like textiles, chemicals and engineering goods. It does not help if the government gives partial relief in exempting import duty for those specific manufacturers affected by the inverted duty. The process of verification becomes cumbersome and bureaucratic, and may eventually be self-defeating. Either the import duty on intermediate goods and raw materials must be brought down to zero, or the final goods must be kept in the negative list. The third factor is the issue of export prospects to FTA countries. So far, India’s track record is that export growth to FTA and non-FTA countries is very similar. In fact, the faster bilateral trade growth is with China with whom there is no FTA. India was hoping that services exports to FTA countries would increase, even if the trade deficit in goods trade becomes worse. That has not happened. The services sector is almost 60% of India’s GDP, but is less than half of goods exports. Maybe that is because services are less tradeable than goods. The fourth factor is whether an FTA is actually being “used”. The usage of FTA is measured by issuance of documents like certificates of origin. The actual usage of FTA may be as low as 5-10% only. In other words, even with an FTA partner, much of the trade is without using the FTA conditions (which are required to be authenticated by documents). Is this because the transaction cost is too high? Or is it because the import tariffs in partner country are anyway too low, so that the FTA differential to zero is not much attractive?

India’s enthusiasm with bilateral and regional trade agreements peaked due to a fatigue with the WTO multilateral process. The recent isolation of India as a villain who held up the Trade Facilitation Agreement is not helping our image as a multilateralist. Even then, much caution is needed when embracing new FTAs or arrangements like RCEP. Just as Prime Minister Modi has the slogan “per drop, more crop” to highlight irrigation optimisation, similarly “more jobs per FTA sop” is a slogan that needs to be coined. The ultimate metric for assessing the impact of a trade agreement is its ability to create jobs, not just bring in foreign exchange. The Indian subcontinent is the only place in the world where intra-regional trade is almost absent. In North and South America, in Europe and East Asia, bulk of the trade is between neighbouring countries, and within a distance of 200 km of the border. But in South Asia, 95% of trade is outside the region, with distant partners. The Prime Minister’s cross-border diplomacy that began with his oath-taking ceremony will hopefully correct this skew.

We are in a decadal phase, wherein global trade growth will barely touch double digits. Even then, since we start with a lower base, it is possible for India to grow by 100% and hence double its global trade share. This should be achieved with a commensurate growth in jobs and industrial production. Else, let the regional FTAs proceed at the speed of the Doha round.