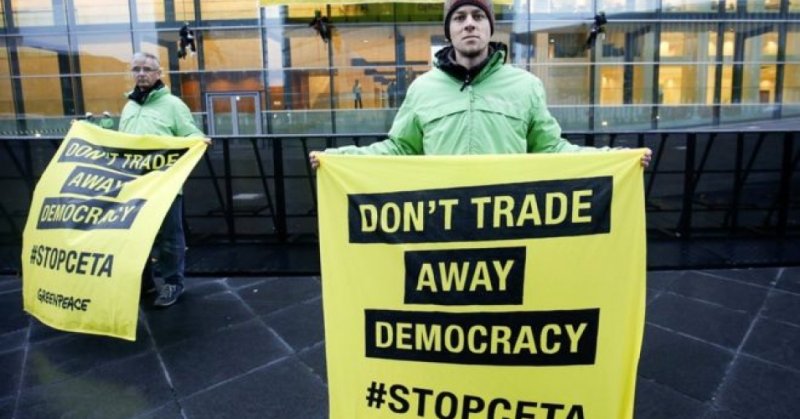 Criticised by Commission President Jean-Claude Juncker during the signature of CETA, the president of Walloon party CDH, Benoît Lutgen, has repeated that there had been insinuations about negative consequences for the region if it continued to veto the trade treaty with Canada.

At the press conference following the signature of CETA yesterday (30 October), Juncker attacked Lutgen over his statements that there had been pressure on Wallonia. He also invited Belgium “to reflect over the way of functioning” over the signature of international treaties.

The Walloon government fiercely opposed for ten days the CETA signing, thus preventing the Belgian federal government from giving the green light, as had the other 27 member states of the Union. Belgium has a total of seven parliaments and each one can block international treaties.

Belgium has a total of seven parliaments and each one can block international treaties.

The Walloon government is composed of the French-speaking Socialist party and of Centre Démocrate Humaniste (CDH, a force affiliated to the centre-right EPP). Juncker thanked the leader of the socialists Paul Magnette, who is also the prime minister of Wallonia, for having acknowledged the constructive role of the Commission over the issue.

“We never threatened Wallonia, and I say this (to the attention) of the CDH and its president,” said Juncker.

Lutgen replied to Juncker in the course of the day.

“I did not have Juncker in mind especially when I said that there was pressure, but yes, there was. There were insinuations, we were made to understand that there would be consequences for Wallonia,” said Lutgen.

“Jean-Claude wake up! It’s amazing that Wallonia has to fight alone against the multinationals, and the same thing over farmers,” Lutgen said. “We don’t want a Europe of multinationals”, the CDH leader added.

Jean-Michel De Waele, professor of political science and dean of the Social Sciences Faculty at the francophone Free University of Brussels (ULB), tweeted that Juncker had probably “drunk too much” by attacking CDH, one of the most pro-European and federalist forces of the EU. He also called the attack a “suicidal tendency”.

Earlier, Magnette had protested about the remarks made by the European Commissioner for the Digital Economy Günther Oettinger made at a gala dinner in Hamburg hosted by the German employers’ federation AGM.

Oettinger reportedly said in Hamburg that Wallonia was a “micro-region, run by communists, that blocks all Europe”, adding that this was “not acceptable”.

Magnette said that if the reported remarks were true, this was showing “total disregard vis-à-vis the region, its elected officials, the citizens and civil society which were mobilised over the CETA issue.

“This Walloon democratic impulse should be encouraged rather than being treated with contempt or insult. I hope that the European Commission does not pass such remarks,” Magnette he said.

Magnette tweeted that the statements by Oettinger were unworthy of a Commissioner and questioned if the Commission would be as tough against the homophobic remarks by Oettinger as it had been against those who defend democracy and transparency.

Oettinger is expected to get a promotion by taking over the budget portfolio from Bulgaria’s Kristalina Georgieva, who resigned to take a job at the World Bank in Washington, starting next January.