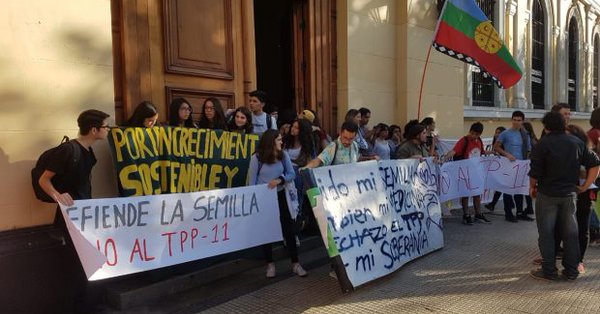 Chile is currently experiencing convulsed political days given the heated debate over the parliamentary ratification of the Trans-Pacific Partnership, known as TPP11. This treaty was signed by the 11 member countries in March 2017, pushed by the government of Michelle Bachelet. Since the signing of TPP11, a battle began in Chile which has recently reached its peak. After the Executive Power presented it to be discussed in the plenary session of Representatives in March, the project was forwarded to be rediscussed in three commissions: Agriculture, Labor and Constitutional issues; in the first two the project was rejected. This has shown that TPP11 does not have a political consensus in Chile today. The forces of the biggest Chilean parties, prone to free trade, are divided on the project, and it has already received its total rejection by the parties of the left and progressive parties.

But TPP11 is the worst of all signed FTAs. Since the treaty began to be negotiated in 2012, originally with the US, the regional social movement ignited the warning alarms. The platforms and convergences "Better without TPP" were quickly established in Mexico, Peru and Chile, with the focus on the need to share action strategies. The analysis was univocal: the TPP is a Free Trade Agreement (FTA) that brings in its 30 chapters the most advanced topics of privatization and deregulation, impacting directly on access to seeds, medicines, basic services and even Personal information. Therefore, the TPP had to be stopped; for this, the political subject that opposed the treaty in each country should be built. The work of weaving networks and contacts by the Chilean Platform “better without FTAs” finally gave rise to the constitution of a great front "No to TPP11" made up of environmental movements, trade unions, political parties, feminist organizations, among others, that linked their topics of daily work with the TPP11.

The fight that is taking place today in Chile is little known outside the national territory. But without a doubt it is the most relevant fight against the FTAs in recent years. And the TPP11 is not just another treaty: it is the worst Free Trade Agreement in history, because it is the one that most crystallizes corporate privileges and foreign investors rights, restricting the rights of peoples to have a decent life. What happens in Chile will have a cascading effect throughout the region, in a context where presidents accept liberalization as the only possible plan, and new negotiations multiply, especially in the face of Pacific countries.

[1] Luciana Ghiotto is the regional coordinator of the Platform “Latin America better off without FTAs”; member of ATTAC Argentina and collaborator of Transnational Institute (TNI).