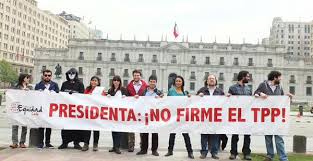 Citizen opposition to the signing of the TPP will take place throughout the region, with joint mobilizations taking place in Peru and Argentina.

Leaders and representatives from Chilean social movements will stage mass protests on Friday against the proposed Trans-Pacific Partnership (TPP) trade deal, which they argue is being imposed through anti-democratic means and solely in favor of the interests of multinational corporations.

“We believe that these protests are essential in exerting pressure and bringing to light the trade negotiations that have been carried out behind closed doors between politicians and corporations, without democratic participation,” according to the press release issued by the protest organizers.

The demonstrations take place as President Michelle Bachelet is expected to sign the controversial trade agreement on Feb. 4, which will then be sent on to the Chilean parliament for final approval.

Spokesperson for the Ecological Collective Patricia Nuñez added that the objective of Friday’s protests will be to inform Chilean lawmakers of the deal’s potential ramifications.

Nuñez warned that if approved the deal would violate the country’s national sovereignty by allowing private corporations such as Monsanto to patent seeds they discover, develop or modify and require small-scale farmers to pay those companies for the right to use similar seeds.

Activists argue that the TPP agreement will introduce aspects of a controversial Agriculture bill, which was suspended by President Bachelet following strong public pressure over concerns that it would have violated food sovereignty and biodiversity.

Citizen opposition to the signing of the TPP will take place throughout the region, with joint mobilizations taking place in Peru and Argentina.