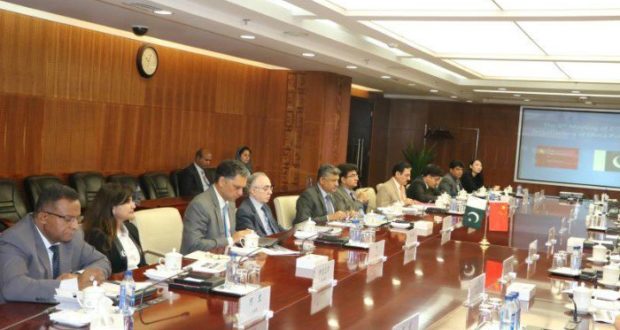 China wants no more damage to Pakistan in bilateral trade which is why the former has offered to re-initiate the stalled talks on Free Trade Agreement-II in February 2018 and to this effect Islamabad has received an invitation letter from Beijing for talks.

Chinese trade minister on the sidelines of recently held WTO meeting has extended assurance to Pakistan team headed by the secretary commerce that China will soon decide holding FTA-II talks and before arrival of Pakistan’s delegation in Islamabad, the ministry had received the invitation from Beijing for talks on FTA-II.

“We are all set to shape up the FTA-II by February next year with an aim to explore market of 1.3 billion population of China and protect our industry exposing the trade balance to a win-win situation as currently the trade balance of over $10 billion is heavily tilted towards China as the bilateral trade stands at over $14 billion out of which imports from China are at over $12 billion, whereas Pakistan’s exports are at just $2 billion,” Secretary Commence Younas Dagha told The News.

Younas Dagha said he has planned increasing exports of the country by 13 percent by June 2018 with a strategy to limit the imports to $2.5 billion every month with expected reasonable FDI and remittances. “This will not only ensure the manageable imports but also help reduce the swelling trade deficit. This will result in meeting the challenge of current account deficit and anxiety to this effect has visibly started subsidising,” he said.

Coming to the trade with China, he said that both the counties are doing trade under FTA-I. The bilateral trade with mammoth trade deficit of $10 billion is not sustainable and to cope with the worsening situation Pakistan needs rectification in talks to be re-initiated in February for FTA-II. The benefits out of concessions in tariff lines that Pakistan had managed under FTA-I have eroded when China extended the same concessions in FTA to Asean countries.

“Now for FTA-II, I have asked the concerned officials to vigorously prepare for FTA dialogue and prior to formal talks I want at least three video conferences on technical issues with Chinese counterparts to ensure meaningful talks for FTA-II. There are 8,000 tariff lines that will be negotiated with Chinese counterparts and to shape up the trade deal-II in favour of Pakistan, we will go in talks as per the studies and models the Commerce Ministry have had exclusively for China,” he said.

The ministry has also made models and conducted studies separately for Turkey and Thailand before entering into trade agreements. Many sessions have been held between the two sides on FTA-II but ended in fiasco as Pakistan wanted one sided trade concessions, but China refused to do.