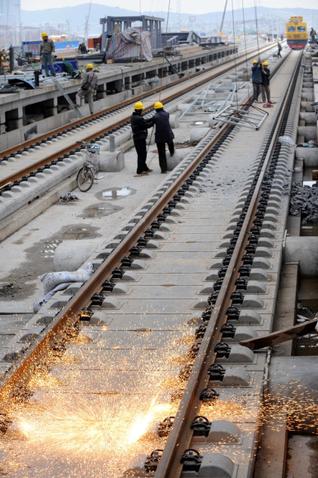 To recoup the investment, China’s Ministry of Railways calls for "equivalent access to resources" in countries where China invests in such projects. Photo: Xinhua

China will, in coming months, accelerate plans for high-speed rail links with Myanmar, Cambodia, Thailand and Laos, as part of a wider effort to deepen engagement with its Southeast Asian neighbours, officials said this week.

In two months, work will begin on a 1,920-km high-speed rail line connecting south-western Yunnan province with Yangon in Myanmar, with trains running at over 200 km/h, the official China Daily reported on Monday. The newspaper quoted Wang Mengshu, one of China’s leading railway consultants, as saying studies were also under way to link Yunnan’s capital Kunming with Cambodia, Laos and Vietnam. In August, the Ministry of Railways also sent a team to Thailand to explore investing in a $ 25.6-billion, 240-km high-speed railway and rail network.

Mr. Wang, who is a professor with the Chinese Academy of Engineering, told The Hindu in an interview earlier this year that construction had already begun on a line connecting Kunming with Singapore. The Southeast Asian network, he said, could be completed as early as 2020.

Beijing’s increased infrastructure investment in Southeast Asia, analysts say, is part of a larger effort to expand economic and strategic influence in the region. Beijing hopes the investment will also ease anxieties among its ASEAN (Association of Southeast Asian Nations) neighbours over the impact of China’s rising economic influence. While China became the first country to ratify an ASEAN Free Trade Agreement (FTA), a fast-widening trade imbalance in China’s favour, in part fuelled by the flooding of the ASEAN market with Chinese goods, has led to strains in commercial relationships with many ASEAN countries. The trade deficit grew to $21.6 billion last year. A number of countries have also voiced concern over the pattern of Chinese investments, which have generally targeted resources such as oil and minerals.

“China needs to reinforce the peaceful rise message by showing, first of all, that its pattern of investments is not just for resource security,” Indonesian Trade Minister Mari Pangestu told The Hindu in an interview during a visit here last month.

Ms. Pangestu suggested increased infrastructure investment, such as in railway networks, as one way for China to do so.

During her visit, China signed a deal to support $350-million financing for trade and investments in Indonesia.

China has also recently proposed a $15-billion fund for infrastructure-building in ASEAN countries.

One concern for China is how it will recoup its vast investments in projects such as the high-speed rail lines. “There is no technological barrier to building high-speed railways to Southeast Asian countries but China needs to take profitability into account,” Ji Jialun, a professor at the Beijing Jiaotong University, told the China Daily.

One proposal that has been mooted by China’s Ministry of Railways calls for equivalent access to resources in countries where China invests in such projects.

In recent years, China has increasingly begun to explore expanding its domestic high-speed rail network, which is already the world’s biggest, beyond its western and southern borders. In the west, China has, so far, reached agreements to build railway lines from its Xinjiang region to Tajikistan and Kyrgyzstan, according to Mr. Wang.

The national network will reach 120,000 km by 2020, and 60 per cent of the railway lines will be located in China’s western regions, which have historically lagged the coastal east on most development indicators.