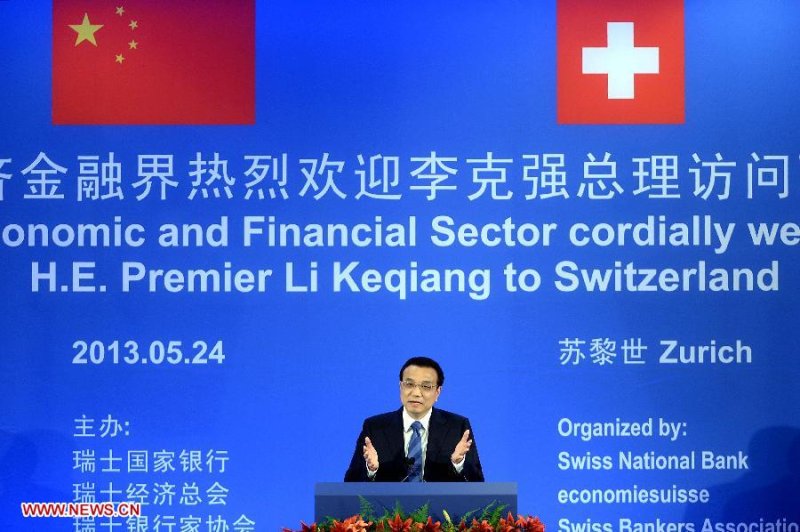 China’s agenda in Switzerland (and Europe)

Dr Daniel Woker is the former Swiss Ambassador to Australia and now a Senior Lecturer at the University of St Gallen.

For his first trip abroad as Chinese premier last month, Li Keqiang went to India and Pakistan and then continued to Switzerland and Germany before heading back home.

Germany, the EU’s economic powerhouse, was a logical choice. Li’s main business was to lobby his hosts against the EU trade commissioner’s biggest ever investigation into alleged dumping. He found sympathetic ears in Berlin, though as we now know, the EU Commission went ahead with its punitive import duties on Chinese solar panels regardless.

But why Switzerland? Two reasons stand out. First, the two countries are in the final stages of signing a bilateral FTA, only the third Beijing has been willing to conclude with a developed country, after New Zealand and Iceland.

For the first time, China is ready to substantially lower its duties (84% of all Swiss imports will be exonerated from custom duties over time) on manufactured products, as opposed to the mainly agrarian exports from New Zealand and Iceland. The treaty will also contain some language on human rights and worker protection, presumably setting a standard for other such treaties.

It is important to underline that an FTA with Switzerland (a major European economy which ranks 19th globally), which is linked with the EU through a bilateral free trade agreement but not a customs union, will not allow for automatic entry of Chinese goods into the EU.

However, FTAs with two non-EU European countries, coupled with an aggressive recent move into ownership of Greek shipping terminals, will give China something of a bridgehead in view of the big prize, an FTA with the EU. Last year China exported goods worth US$377 billion to the EU, its number one economic partner ($20 billion of this total was solar panels).

Telecommunications are another area of contention. Here it is only partly a question of export dumping being claimed by the EU, but also the conduct telecoms giant Huawei, subcontracted by a number of European telecom companies for local work. Huawei is practically barred from doing business in the US due to fears for sensitive national security data.

The second reason for Li’s visit to Switzerland was financial. As is well known, Beijing is working on the internationalisation of its currency. The very international Swiss market offers good prospects for the sale and trade of financial products issued in renminbi as first step to establishing it as an international reserve currency. The fact that all the bigwigs of the Swiss banking scene were present at a lavish Zurich reception for Li was not lost on observers.

Ironically, quite a number of these banks are in deep trouble these days. The hallowed Swiss banking secrecy is actually all but gone, mortally wounded by Washington’s FACTA obligation for full information exchange on accounts of US citizens abroad and finished off by the subsequent request from EU countries to get no less for their respective fiscal authorities. Add to that the incredible imprudence of quite a number of these banks, which continued aggressively marketing their private wealth management services towards tax cheating clients abroad long after it became crystal clear that this would be treated as money laundering with stiff penalties for accomplices, too.

The world’s largest private wealth manager, UBS, after having already paid stiff penalties in the US and in Germany, and with individual bankers facing prison sentences, is rumoured to be threatened by a similar indictment in France, with potentially more to follow.

The irony thus lies in Beijing coming to town at a point when the Swiss financial market appears to be on the way to slowly shrinking towards something more in line with the real economy of the country.