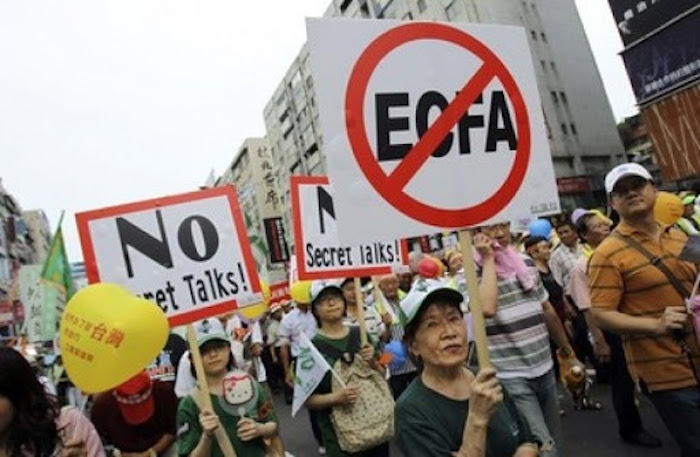 TAIPEI — A decade on from the signing of what amounts to a free trade agreement between Taiwan and China, the economic integration it was meant to accelerate remains a long way off, as growing wariness toward Beijing in Taipei has stalled implementation of the deal.

The Economic Framework Cooperation Agreement was concluded 10 years ago Monday under then-Taiwanese President Ma Ying-jeou and his pro-Beijing Kuomintang.

The two sides agreed to implement an "early harvest" phaseout of tariffs on 539 Taiwanese products and 237 from China, including agricultural goods, machinery and plastics. These terms favored Taiwan, in an apparent effort to nudge Taipei toward Beijing’s end goal of unification.

Items covered by this deal accounted for 21.6% of Taiwan’s exports to China in 2019, according to the Taiwanese Finance Ministry, resulting in $900 million in savings. "Tariffs of around 12% on fruit have gone to zero," said a source in the agriculture industry.

But cross-strait economic exchanges have stalled since around 2015. Though China remains Taiwan’s largest export market, with the mainland and Hong Kong together accounting for 40.1% of the total last year, its share has fallen 2 percentage points since 2010.

ECFA includes provisions on future expansion, written with an eye toward future economic integration. But as fears grew in Taiwan about assimilation by Beijing, a proposed 2014 agreement on trade in services under the ECFA umbrella sparked what came to be known as the Sunflower Student Movement, in which young protesters occupied the legislature in Taipei for weeks. Talks on the deal broke down.

China-skeptic Tsai-Ing wen was elected president in 2016, and anti-Beijing sentiment has continued to grow, fueled by the mainland’s crackdown on Hong Kong. Trade friction between Beijing and the U.S. has spurred Taiwanese businesses that had relied too heavily on the Chinese market to branch out, lessening the importance of the cross-strait relationship.

Taiwanese media have reported that China could unilaterally withdraw from ECFA — a move that would likely be intended to put pressure on Tsai’s administration. But doing so would risk only driving Taipei further away from Beijing.

Darson Chiu, deputy director of the macroeconomic forecasting center at the Taiwan Institute of Economic Research, considers it unlikely that China will move to scrap the deal. "Taiwan, with its strong technological capabilities, is growing in importance [to China] amid its battle with the U.S. over advanced technology," Chiu said.

Meanwhile, the breakdown of negotiations on full implementation of ECFA may have negative consequences for Tsai’s government.

Taiwan has almost no free trade agreements with other countries, due to Beijing’s assertion under the "One China" principle that the island is an inalienable part of a single China. ECFA has been positioned as an avenue through which Taipei could participate in the Regional Comprehensive Economic Partnership trade pact.

Avoiding isolation will be a crucial challenge for Taipei. Tsai, who was elected to a second term this year, said in her inaugural address in May that Taiwan "will keep working to sign trade or investment protection agreements with the United States, Japan, and European countries." Doing so would be certain to provoke a backlash from Beijing.