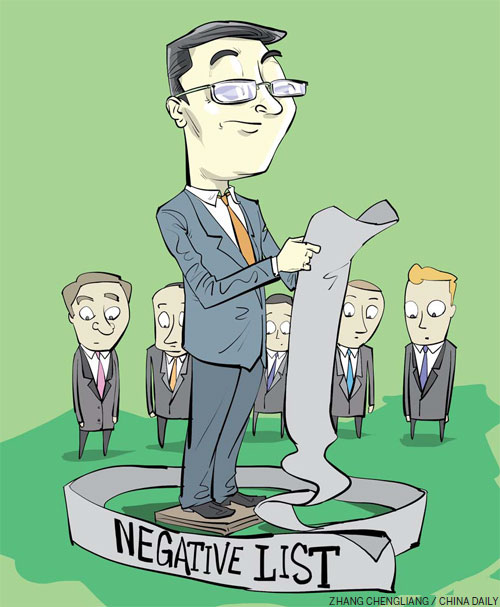 The new negative list will be applicable to both domestic and foreign investors.

Sources told the Global Times that China’s top economic planning agency, the National Development and Reform Commission (NDRC), and the Ministry of Commerce (MOFCOM) will unveil the list after it is approved by the State Council, the cabinet.

This is in line with an earlier Xinhua News Agency report, which said the 2018 version of the market-entry negative list will be completed and promulgated before the end of the year.

An NDRC spokesperson said on November 15 that the list has been submitted to the State Council for approval. A trial version of the list is now being tested in 15 localities in China.

Bai Ming, a research fellow at the Chinese Academy of International Trade and Economic Cooperation, said that the new list will increase the level of transparency and predictability for market practices in China.

"The transparency of doing business in China will be further increased by the new list, and foreign investors will see clearly what kind of investment is off-limits," Bai said. "Equally importantly, they will also get a clear idea of the do’s and don’ts faced by their Chinese partners," Bai noted, adding that this should "ease the concerns among foreign investors in China to some extent."

There have been some concerns that the list contains more items than expected, but Bai said it will feel easier for foreign companies to do business in China when Chinese companies are also governed under a negative list approach.

Experts said the release of the list will tie up with the Special Administrative Measures for the Access of Foreign Investment 2018, a list of industries in which foreign investment is either prohibited or restricted.

The Special Administrative Measures for the Access of Foreign Investment 2018, which took effect in July, reduced the number of restrictive measures from 63 in the previous version to 48.

"Eventually, the contents of the two lists will converge, but this will be a long and difficult process," Bai said.

Experts said the new list will lay down foundations that will be conducive for further negotiations on the bilateral investment treaty (BIT) between China and the EU.

"The list will help with the BIT talks as it will ease some concerns about market access," said Ye Fujing, director of the Institute for International Economic Research, a think tank under the NDRC.

Chen Fengying, a research fellow at the China Institutes of Contemporary International Relations in Beijing, told the Global Times that market entry talks under the umbrella of the BIT talks will be based on the new market-entry negative list.

"The national list will grow shorter and shorter. And the unveiling of a shorter list will have a positive effect during the current 90-day negotiation period between China and the US as they seek to end the trade tension," Chen said.

However, Ye noted that the BIT talks will also cover many other aspects not included in the market-entry negative list, such as State-owned enterprises, intellectual property protection, technology transfer, government procurement, and digital governance.