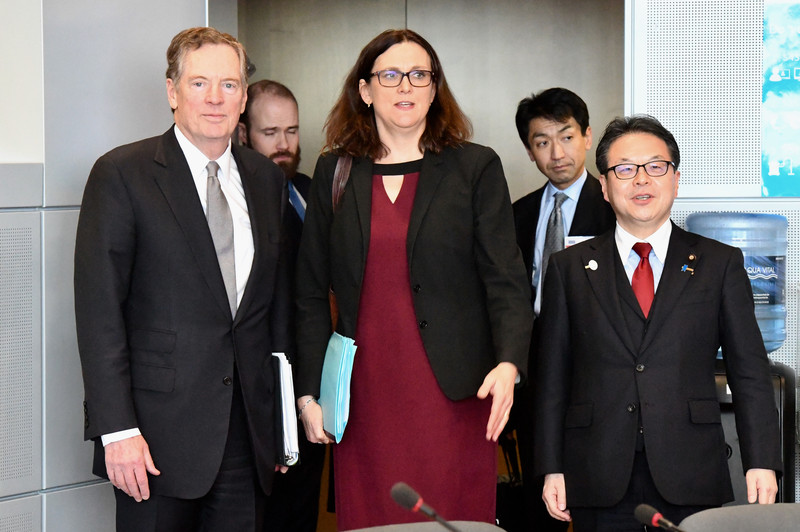 By Valentina Pop and Bojan Pancevski

The European Union is drawing up a peace offer it hopes will end trade hostilities with the White House and avoid steel and aluminum tariffs being imposed on the bloc in two weeks’ time, according to European officials.

Its centerpiece: A miniature, simplified version of the Transatlantic Trade and Investment Partnership—the controversial EU-U.S. trade agreement that was negotiated but never concluded under the Obama administration.

To complete the offer, the EU is considering joining forces with the U.S. in tackling what both see as China’s unfair trade practices, the officials said.

In return for lower barriers, which could also apply to some agricultural products and pharmaceuticals, the EU would ask for its companies to be granted access to U.S. government procurement, a longstanding hurdle in the TTIP negotiations.

The eventual agreement could include a commitment for the EU to participate together with the U.S. in legal action against China at the World Trade Organization, as well as a pledge for leading European governments to apply more pressure on Beijing to create a level playing field for international companies and curb intellectual property theft, according to German officials.

“On China, we agree with the U.S. on the problem, we just don’t agree on the method,” said one EU diplomat familiar with talks on the new offer.

Alongside other sweeteners, the EU is also speeding up unrelated negotiations that would allow more U.S. high-end beef exports to enter the EU market but have been dragging on for years.

The multipronged approach began with an initiative by Germany, whose booming economy is highly dependent on exports and stands to lose the most from an escalating trade war with the U.S.

Other countries have since added their own ideas, broadening the offering but also complicating the talks. France, for instance, wants the deal to be conditional on the U.S. rejoining the Paris climate accord, and it is resisting agricultural products becoming part of the package, according to European officials.

Emmanuel Macron, the French president, last month said that “out of principle we discuss nothing when we have a gun to our head” and French officials have dismissed any revival of TTIP as a “sign of weakness.”

Mr. Macron is set to go to Berlin on Thursday to meet Chancellor Angela Merkel for what German officials described as an attempt to define a common approach before both leaders visit Mr. Trump next week.

“We should have a finished proposal for Mr. Trump by the time Ms. Merkel goes to Washington,” said a German official familiar with the negotiations. “Ultimately it will all depend on whether Mr. Trump will be impressed by our offer.”

Before detailed talks on how to implement the EU offer can begin, European officials insist that the bloc’s one-month exemption from new U.S. tariffs on steel and aluminum imports be made permanent.

Cecilia Malmström, the EU trade commissioner, maintained an aggressive posture this week, saying “we are not going to offer [the U.S.] anything at this stage.”

She added, “We expect to be permanently and unconditionally exempted from these measures...When that is confirmed by the president, we are as always, willing to discuss anything when it comes to trade facilitation, trade irritants.”

However, EU diplomats and European government officials said that behind the hard rhetoric, the bloc was busy hammering out a deal it hopes will avert a breakdown in the strategic trans-Atlantic relationship. A spokesman for U.S. Secretary of Commerce Wilbur Ross confirmed that discussions are ongoing, but declined to give any details.

Mr. Trump last month invoked national security for imposing the tariffs—25% on steel and 10% on aluminum—but granted the EU, Canada, Mexico, Australia, Argentina, Brazil and South Korea temporary exemptions and a chance to negotiate their way out of the tariffs.

While its focus is on de-escalation, the EU is also considering countermeasures should the talks fail. On Monday, its representatives at the WTO followed China in requesting consultations about the U.S. steel tariffs. In Brussels, EU officials on Tuesday finalized a list of retaliatory measures, in case no agreement is found by May 1.

In his statements bemoaning what he has described as the unfair trade advantages enjoyed by Europe, Mr. Trump has often singled out Germany, which has a large trade surplus with the U.S. and linked it with other complaints, such as Berlin’s allegedly insufficient military spending.

This suggests an agreement on averting the steel and aluminum tariffs could come as a package of European and national measures not necessarily all with a direct trade link.

“President Trump wants to put everything on the table: our trade surplus, the car exports, defense spending and the relationship to Russia,” a Berlin official said.

Adding extra German defense spending to the EU’s peace offering for Mr. Trump won’t be easy. The left-leaning Social Democrats, junior partners in Ms. Merkel’s coalition, are resisting a sizable increase in the budget of the military.

"The problem international partners have is that they’ve been used to a certain trade playbook,” says John Clancy, senior adviser with FTI Consulting , a Brussels-based business consultancy, alluding to how Mr. Trump had refocused U.S. trade policy away from the sprawling multilateral trade rounds of the past decades onto bilateral deals.

“With the current U.S. administration, you have to throw that playbook aside and think afresh,” he said.