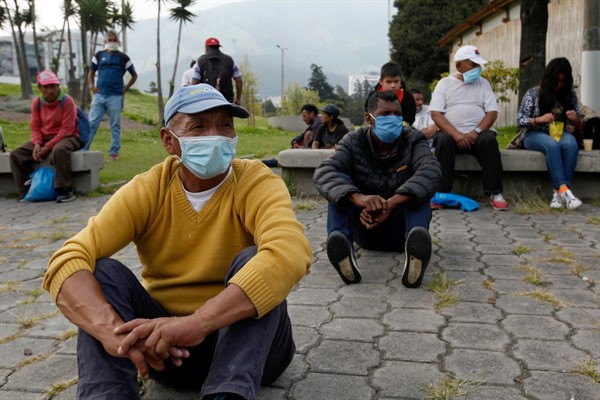 Germany will leave a big mark on the European Union over the next six months as it takes over the rotating EU presidency. The announcement of the German, Portuguese and Slovenian governments that during their trio presidency they are committed to an “open, ambitious and fair” trade policy sounds benevolent.

How “ambitious” our traded volumes with far away countries like Australia and New Zealand need to be at a time when larger geographical distances come with larger supply chain risks and higher environmental costs can already be questioned. But the more immediate dangers are everywhere one looks.

Certain corporations and law firms are also very “ambitious” when it comes to exploiting the legacy of the EU’s trade policy. They are lining up to sue our governments to the tune of tens of billions of euros.

And what did these governments do wrong? They were trying to protect people’s lives and their jobs through unprecedented government actions to halt the spread of Covid-19 and to tackle the fallout of the resulting socio-economic crises.

This may be hard to fathom but a wave of Investor-State Dispute Settlement (ISDS) cases is currently coming after our tax money. These saboteurs are companies who feel that their future profits are more important than our lives. And there are law firms lining up to facilitate and enable this sabotage.

Attracta Uí Bhroin, vice-president of the EEB, observed: “An Italian law firm was even publishing notes about the potential to sue governments for the actions being taken in countries to control the spread of the pandemic. It will be unacceptable if the German presidency does not address this issue on behalf of all the EU member states.”

The EEB joined a global coalition of more than 600 organisations from 90 countries demanding an end to this madness by suspending all ISDS cases with immediate effect.

Meanwhile, the Austrian, Walloon and Dutch parliaments have all rejected the proposed EU-Mercosur free trade agreement, the principles of which were agreed last year, in its current form, while France and Ireland have expressed clear criticisms.

So what is not to like about this deal?

Well, here is a shortlist of the impact the EU-Mercosur deal will have or is already having: higher exports of (German) cars; facilitating monocultures in previously biodiverse regions of the world; manmade Amazon fires, which reached new highs in June, to clear land for agriculture and livestock ranching, violence to indigenous peoples and animals; increased pesticide use, as well as greenhouse gas emissions from production, deforestation and shipping. The EEB was one of 265 organisations who signed a letter calling to bury this bad deal and start from a clean sheet.

"What we need the German presidency to do instead is to join hands with the Justice Commissioner and push for an ambitious proposal for a European Due Diligence Directive. Companies must be held to account for substandard labour conditions and environmental degradation in their value chains.”

Arnaud Schwartz, president of EEB member France Nature Environnement, said: “Our federation acts against deforestation in the Amazon rainforest because it is linked to French and European imports of genetically modified soy. This dirty soy feeds our farm animals and leads to overconsumption of animal products.

"The fragility of our society became clear with Covid-19 but the climate emergency and biodiversity collapse threaten us even more. It is time we stop this EU-Mercosur agreement and change both our food habits and our agricultural system.”

Another deal that the German government desperately wishes to pursue at all cost is one with the United States. This would involve importing vast quantities of monoculture crops and the dirty pesticides used to grow them, as well as very dirty fossil fuels produced through hydraulic fracturing or fracking.

"This will enable the EU to do some creative accounting and keep the emissions associated with the latter out of our climate books. But global warming does not cook the books, it cooks the planet, regardless of where the oil or gas was drilled.

So, why is the EU even pursuing such a deal?

Could Germany’s wish to make fast progress on EU-Mercosur, EU-US and other trade deals, as well as its neglect of the business-friendly loophole called ISDS, be linked to the reportedly record-breaking influence of corporate lobbies?

Or is it because the import-export value of the German economy dwarfs all other EU economies (it is twice as large as the second country in the ranking)?

Either way, the traditional German position on trade deals undermines the desire of people in the EU to take more serious action to tackle the threats from global warming, mass extinction and pandemics. The EEB will help ensure that these voices are heard, for example in the public consultation on the EU’s trade policy, which the European Commission kicked off in June 2020.

Could it be that the German position is starting to shift a little, due to the pandemic experience? German’s Foreign Minister Heiko Maas said at the start of the German presidency that the two keywords for the coming period are ‘solidarity’ and ‘sovereignty’. He added that the EU needs to be more independent on energy and natural resources. How that sits together with the proposed EU-Mercosur and EU-US deals, is not clear.

Speaking of energy: there is yet another big thing that Germany can do during its half year presidency: it can get out of the Energy Charter Treaty (ECT), an obscure legal pact which is known as the "biggest climate action killer nobody has ever heard of". Just like Italy did. And ideally take as many other EU member states as possible with them through the exit door.

Negotiations to reform the existing ECT began yesterday. But 13 MEPs agree with us that this fossil fuel treaty is well beyond “fixing”. They write: “Fossil fuels would have to be excluded from the treaty’s protection. Moreover, the Investor-State Dispute Settlement (ISDS) mechanism that allows companies to claim such absurd amounts of compensation, needs to be scrapped or fundamentally reformed and limited.

"None of the ECT signatories – including the EU – is currently putting forward the above proposals, making it clear from the start that the reform will not make the ECT compatible with our climate commitments, nor address concerns that the arbitration mechanism in the ECT is incompatible with EU law.”

With the escalating standoff triggered by the coronavirus crisis, sitting on the fence is no longer possible. We need to act, boldly. With unscrupulous corporations declaring war on government action to protect people from COVID-19 and a climate calamity, it is time for citizens and states to strike back.

The EU institutions and the German presidency must take the side of citizens against corporate greed. If they do, we will have their back every step of the way.