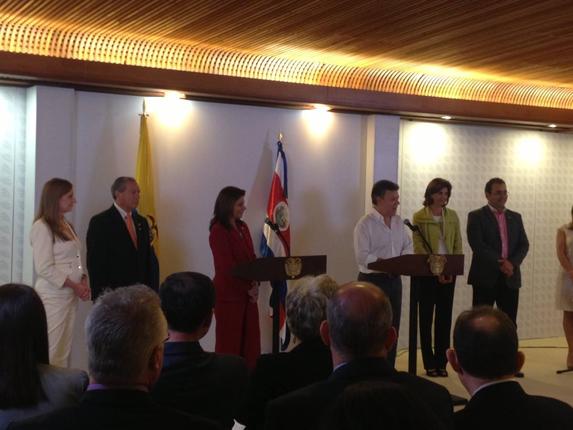 CALI, Colombia – Colombian President Juan Manuel Santos and Costa Rican President Laura Chinchilla on Wednesday evening penned a bilateral free trade agreement that will help pave the way for Costa Rica to become a full member of the Pacific Alliance, a Latin American trade bloc launched in 2012. The signing of the trade deal took place on the eve of seventh Pacific Alliance Summit, set to take place on Thursday in Cali.

Current members of the alliance include Colombia, Mexico, Chile and Peru. Membership requires Costa Rica to have bilateral free trade agreements with each alliance member country. With Wednesday’s signing, Costa Rica – currently an observing member – is in compliance with that requirement.

Santos called the Pacific Alliance "the most important integration process that Latin America has undertaken in history."

"These are four economies that are growing at higher rates than the rest of Latin America, and these economies bring the most investment and are creating the most jobs. Our aim is to maintain that growth," Santos added.

"We’re laying the foundation for an even better relationship [between Costa Rica and Colombia], Chinchilla said in a brief speech at the signing ceremony. "We share a vision that is increasingly solidifying in the region, which is the understanding that free trade is the motor of growth."

Seventy percent of the negotiated tariff items in the trade agreement will be eliminated immediately, while 26 percent of tariffs will be phased in over of a period of three to 15 years.

Trade between Costa Rica and Colombia reached $500 million in 2011.

For Santos, the agreement "will help generate more confidence among Colombian investors" looking to do business in the Central American neighbor to the northwest.