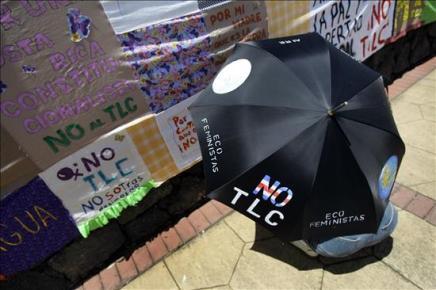 Costa Rica could miss its Oct. 1 deadline to pass law reforms needed to enter the Free-Trade Agreement with the United States (CAFTA) because of a legal snag in the final bill on intellectual property: Nobody thought to ask the country’s indigenous people.

Procedural irregularities occurred when the Legislative Assembly passed the bill, “having neglected to consult the indigenous people, in accordance with Convention 169 of the International Labor Organization,” according to the 4-3 ruling by the Constitutional Court yesterday.

Following the ruling, the government issued a statement expressing concerns that Costa Rica might not make it to CAFTA, ratified here in referendum last October.

The government “is greatly concerned about the impact of this ruling, in particular because of the issue of deadlines that Costa Rica has committed to,” said a communiqué cosigned by the Presidency Ministry and the Foreign Trade Ministry, according to newswire EFE.

The government “will do everything possible and within its reach so that this doesn’t affect the ultimate incorporation of Costa Rica into CAFTA,” the statement said.

Trade partners have said Oct. 1 is the final deadline after extending the date initially from Feb. 29.