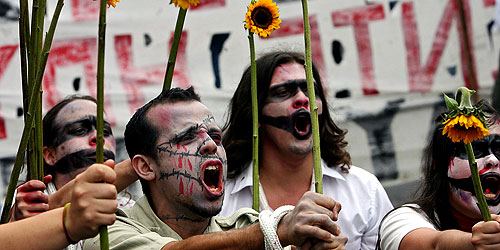 SAN JOSE, COSTA RICA — With just over two weeks to go before Costa Ricans head to the polls to vote on a free-trade agreement with the United States and six other countries, Alfredo Volio should be a happy man.

As head of the "yes" campaign championing the pact, known as CAFTA, he has watched public support climb in recent months. The latest opinion polls showed Costa Ricans leaning toward backing the Central American Free Trade Agreement, which would dismantle most trade barriers between the United States and half a dozen Latin countries.

But that was before a memo written by CAFTA advocates was leaked to the public this month, fueling outrage here. The document, dated July 29 and written by two high-level government officials with close ties to Costa Rican President Oscar Arias, outlined a campaign of dirty tricks intended to sway voters.

The authors proposed smearing CAFTA opponents by linking them to leftist firebrands such as Venezuelan President Hugo Chavez and Cuban President Fidel Castro. They called for a public relations campaign to "stimulate fear" among citizens about the alleged dangers of snubbing the deal.

They also advocated punishing local officials — by withholding funds for public programs in their regions — if their constituents repudiated CAFTA.

CAFTA opponents have cried foul while supporters have suddenly found themselves on the defensive over a measure that appeared headed to victory. Prominent CAFTA backers, including Arias, have distanced themselves from the memo, which was addressed to him and his brother, Presidency Minister Rodrigo Arias.

One of the authors, Second Vice President Kevin Casas, has resigned from the "yes" campaign and temporarily stepped down from his Cabinet post as planning minister while election officials investigate whether any laws were broken.

Solis predicted that the memo would spark a backlash among undecided voters and citizens fed up with corruption scandals that have roiled Costa Rica in recent years. Other analysts have dismissed the incident as political noise that will quiet down by the day of the referendum, Oct. 7.

What’s clear is that the document has energized CAFTA opponents and embarrassed Arias just ahead of the crucial vote.

"It’s a blow," said Volio, a former government minister, in a recent interview in his office in an upscale suburb of Costa Rica’s capital. He said he knew nothing of the memo until it was leaked to the media, adding that the "yes" forces had not acted on any of its recommendations.

Few trade experts would have predicted that Costa Rica, Central America’s most prosperous economy and a model of social stability for the region, would be roiling over CAFTA. It’s the only member of the seven-nation deal that has yet to ratify the pact, which includes the United States, Dominican Republic, El Salvador, Guatemala, Honduras and Nicaragua.

The trade issue has proved so divisive among Costa Ricans that the government relented this year to allow voters to decide whether to ratify it.

Business groups are solidly behind the deal, saying it’s the best way to bullet-proof trading relations with the United States, the destination for about half of Costa Rican exports of coffee, fruit, apparel and high-tech products, and its biggest source of direct foreign investment.

A number of U.S. companies, including Intel Corp. and Baxter International Inc., have set up shop in Costa Rica, attracted by its location, political stability and high-quality workforce. Others are eager to enter the nation’s industries such as telecommunications and insurance, currently government-run monopolies in Costa Rica that would be pried open to competition if CAFTA is approved.

"Costa Rica is at a crossroads," Volio said. "This is about our future."

Opponents are wary of the U.S.-prescribed recipe of unfettered trade and privatization for the region. Some portray CAFTA as an attack on their nation’s unique social model. Costa Rica abolished its army in 1949, choosing instead to invest in education, universal healthcare and social programs that have made it a prototype of human development for the region.

Foes say the benefits of CAFTA will flow mainly to Costa Rica’s elite, making the country more like its impoverished neighbors. For example, some worry that competition will bankrupt the state-run phone service, which, while hardly the epitome of efficiency, has provided Costa Ricans with some of the lowest telecom rates in Latin America. Others fret that protections granted to U.S. pharmaceutical makers will make it harder for Costa Rica’s national health service to procure low-cost generic drugs.

Costa Rica’s powerful public-sector unions are opposed to CAFTA. So are rice and dairy farmers who produce mainly for the domestic market. They fear a flood of subsidized U.S. agricultural commodities will wipe out their livelihoods.

"Our [profit] margins are thin, but this business has always been stable," dairy farmer Roberto Rodriguez Vargas said. "A lot of us couldn’t survive even one or two bad years."

Others reason that if the benefits of CAFTA were so patently obvious, then supporters wouldn’t need to craft a clandestine campaign to scare people into voting for it. Farmer John Brealey said he was fed up with "lies" about how the U.S. would retaliate against Costa Rica if citizens voted against the pact or that leftists such as Castro were bankrolling the "no" campaign.

"Fidel would be so happy that he’d probably live another 10 years if Costa Rica voted it down, but he’s got nothing to do with this," Brealey said. "It’s shameful the way [CAFTA supporters] are trying to frighten people."

Leaders of campaign against the pact say they aren’t against free trade; they just want to cut a better deal by negotiating a separate, bilateral trade agreement with the United States.

Some experts say that’s wishful thinking. Democrats in the U.S. Congress have put the brakes on pending trade pacts with Peru, Colombia and Panama and wouldn’t be enthusiastic about a new round of trade talks with Costa Rica.

The whole debate has put Costa Ricans such as Juan Vargas in a bad mood. The retiree said he was furious about the scare tactics advocated by the secret memo he had read about in newspapers. But he is also worried about a small country such as Costa Rica trying to go it alone in a globalized world.