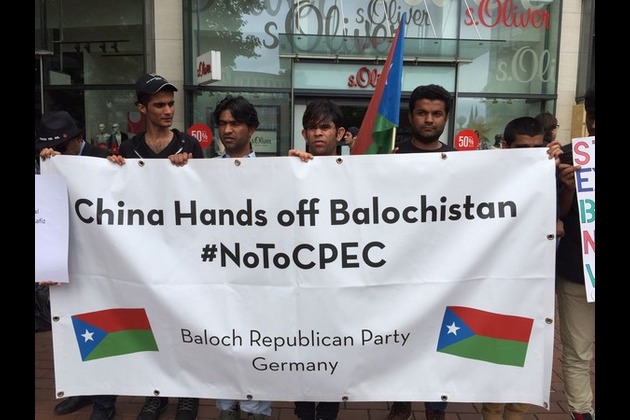 Baloch political activists have alleged that the people in Balochistan are paying a heavy price for the multi-billion dollar China-Pakistan Economic Corridor (CPEC).They were speaking at an event titled “CPEC: The exploitative project’s human cost in Balochistan” during the ongoing 43rd session of the UN Human Rights Council in Geneva.

Speaking at the event, Hakeem Baloch, a leader of the Baloch National Movement, said that the Baloch people are not happy and are fighting against the CPEC.

“CPEC has been there for a long time now and people have been raising their voice and concerns about it. It is not just CPEC which is a problem, it is also ‘One Belt One Road’ initiative which the world must understand,” he said.

“We have been telling the world that this is not an economic project. We see Chinese infrastructure in Balochistan and how brutally they are kicking out the local people from Gwadar and other areas. They have made it impossible for the fishermen to go fishing,” Hakeem Baloch added.

Incidents of enforced disappearances, tortures and killings have seen a sharp rise in Balochistan since the launch of the CPEC project.

Pakistan Army has carried out operations in the areas where the project passes through as they have to provide a clear path to China.

Hatim Baloch, another Baloch activist said, “Normally when such developments come in an area, it brings development and prosperity wherein people would welcome these kinds of developments anywhere in the world. But, unfortunately, with us, it is totally different because these plans are coming without the wish of Baloch people, they are planned in Islamabad and imposed on us.”

He added that it has brought more destruction for the people and failed to bring any development in the region.

Naseem Baloch, leader of the Baloch National Movement said, “Several projects like CPEC are being done with the blood of Baloch people and on corpses of Baloch people. CPEC has intensified it. When Pakistan was heading towards bankruptcy, USD 60 billion of CPEC acted as oxygen for its economy.”

Naseem added that almost all houses and farmlands on the path of CPEC are being destroyed. “Taking advantage of this, Pakistan intensified military operations in Balochistan. They’ve destroyed everything on the route of CPEC – be it human habitation or agriculture land. Baloch people and their cattle were killed,” he added.

Balochistan is a resource-rich region with huge reserves of minerals and gas, but it remains poor because of the exploitative policies of Islamabad. It has given birth to a freedom movement in Balochistan.